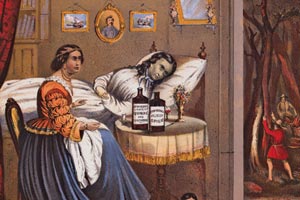 As much as three-quarters of the drugs approved to treat infectious disease and cancer over the past 25 years originated with chemicals or compounds first found in nature. Which means that last acre of rainforest or ocean floor might contain ever more promising cures. A few notable pharmaceuticals that got their start outside the laboratory:

ASPIRIN In the fifth century BC, Hippocrates noted willow bark’s ability to fight fevers and pain. A chemical found in the bark became the key ingredient of aspirin, patented in 1900.

LOVASTATIN This chemical, found in the fungus Aspergillus terreus and oyster mushrooms, reduces LDL “bad” cholesterol. In 1987 it became the first FDA-approved statin.

CALANOLIDE A In the late 1980s, a rare tree from Borneo was found to have antiretroviral properties. Still in trials, the resulting drug has shown promise in combating HIV.

TAXOL Tumor-fighting compound derived from the bark of the Pacific yew, introduced as a cancer drug in 1993. It’s since been found in some mushrooms and mycelia.

YONDELIS A cancer drug modeled after an agent discovered in a Caribbean sea squirt. Currently available only in the EU.

PRIALT In 2004, Elan Pharmaceuticals unveiled this drug for treating chronic pain, made from synthetic sea-snail venom. The drug’s logo is a snail shell.