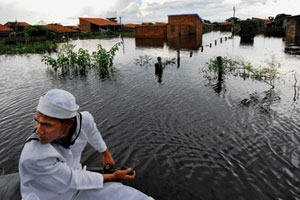 AFTER WEEKS of torrential rain, the Mamoré River spilled its banks in February 2007, swamping the city of Trinidad, Bolivia. Like most residents of his impoverished barrio, 16-year-old Randy Tuve-Semo fled for higher ground with his family. When the water stopped rising, his mother asked him to go see if their home had been looted. Wading into the half-submerged shack, he found their possessions intact but a gaping hole where a wall had been. Suddenly, an anaconda encircled Randy’s leg. Breaking free, he was pulled to safety by a neighbor in a canoe. “I didn’t want to come back to the house after that,” Randy said.

Tuve-Semo’s family eventually returned home, only to flee again in January 2008 when catastrophic floods hit Bolivia’s Amazonian lowlands for a second straight year, rendering much of Trinidad, a city of around 95,000, essentially uninhabitable. The past few years of unprecedented flooding and severe rainstorms have displaced nearly 50,000 people in Bolivia, one of South America’s poorest countries.

Rather than chalking up the destruction to the vagaries of Mother Nature, Bolivian president Evo Morales placed the blame squarely on climate change—and carbon-spewing countries like the United States. Morales has demanded that industrialized countries fork over what some have called “climate reparations”: mandatory compensation to developing nations for the increasingly devastating effects of CO2 emissions. “If there are countries that are doing a lot of damage to the environment, those countries should make some acknowledgment, some reparation for the damages that they are causing,” Morales told me at a forum in New York last November. Shortly after, he released a sweeping 20-point plan, including a demand that developed countries contribute a minimum of 1 percent of their annual GDP to a United Nations fund for poor countries. Venezuela and Nicaragua recently endorsed the proposal; South Africa plans to lobby for a similiar measure in Copenhagen.

The Bolivian populist has tapped into a growing sense of indignation within developing countries. According to the UN, the number of victims of weather disasters in those countries more than tripled between 1980 and 2004, to 257 million a year. During the same time, the incidence of floods and cyclones—which disproportionately affect poor nations—quadrupled. A recent study by the National Academy of Sciences projects that rich countries’ greenhouse emissions will cost poor ones more than $2.3 trillion in damages over the course of the next century—half a trillion dollars more than their current external debt. According to Oxfam International, compensation by leading historical emitters would oblige rich countries to spend an estimated $50 billion per year.

Morales’ call for reparations followed a 2007 report by the Intergovernmental Panel on Climate Change that found there was an 80 percent likelihood that global warming had worsened flooding in Bolivia. While scientists are sure that the world’s climate is changing, they are loath to link individual weather events to climate change, much less a particular source of carbon emissions. Yet as the science of climate modeling and causation improves, says Myles Allen, the head of the Climate Dynamics group at Oxford University and an IPCC contributor, “it will be possible to document in a quantitative way when a weather event happens how much human influence and how much other factors, like El Niño, may have contributed.” That, Allen predicts, will fuel more debate over who bears responsibility for future impacts.

A system that provides “adaptation funds” to poor countries is already in place under the Kyoto Protocol. Washington has yet to contribute to it, though it plans to give $50 million to the Least Developed Countries and Special Climate Change funds, both UN efforts.

Meanwhile, the Bolivian government continues to make its case. Seated in his office in La Paz, a silver tray of coca leaves at hand, Foreign Minister David Choquehuanca blasts the American government for failing to do more for the victims of “so-called natural disasters.” “Why can’t the United States spend what they spend in one day in Iraq, to save lives here?” he demands. He even jabs former Vice President Al Gore. “I don’t know why they gave the Nobel Prize to one of the guilty ones.”

The Obama administration’s position on adaptation financing is unclear. Yet it’s unlikely that it will distance itself from the Bush administration’s stance that America’s aid to the victims of weather disasters is based on largesse, not liability. At the height of Bolivia’s floods last year, then-ambassador Philip Goldberg flew to Trinidad to announce a donation of emergency supplies. “The United States has a humanitarian responsibility to provide help wherever we can,” he replied when I approached him in a camp for displaced families. I asked him if America bore any responsibility for the conditions in Trinidad, which had left thousands like Randy Tuve-Semo homeless. “I think the whole world has a responsibility for the whole world,” the ambassador replied coldly, before marching off through the mud.

UPDATE: On the first day of the Copenhagen climate talks, Bolivia called for world leaders to set a carbon emissions goal of less than 350 parts per million.