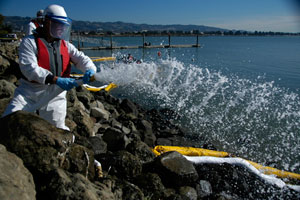 An Environmental Protection Agency staff member is accusing his employer of being coy when it comes to dispersant use in the Gulf. Career whistleblower Hugh Kaufman says EPA officials know that the chemicals present a threat to public health and the Gulf ecosystem and should be banned; they just don’t want to say so.

Kaufman, a senior policy analyst in the EPA’s Office of Solid Waste and Emergency Response, alleges that agency administrator Lisa Jackson sidestepped the issue last week in her answers to questions about whether the agency has the authority to call off use of dispersants in the Gulf. The agency, he says, is deliberately downplaying the threat—and its own role in regulating the chemicals—to protect itself from liability and keep the public from getting too alarmed.

This is far from the first time Kaufman has raised concerns about the EPA’s handling of a major national disaster. In fact, he has been blowing whistles on the EPA since he began working there in 1971, just a few months after it was founded. He criticized the Carter administration’s handling of hazardous waste issues, including the infamous Love Canal example in the late 1970s and is credited with spurring the formation of the Superfund program. In 1982 he went after the Reagan administration for not enforcing laws on hazardous waste and toxic chemicals as well, and helped send deputy EPA administrator Rita Lavelle to jail for perjury in 1983. The 2002 book Whistleblowing includes an entire section on Kaufman.

Most recently, Kaufman exposed the agency’s efforts to hide information about health risks from air pollution for responders at the World Trade Center site after the terrorist attacks of September 11, 2001. At that time, he was the chief investigator in the office of the EPA ombudsman—but soon after he blew the whistle, then-EPA administrator Christie Todd Whitman decided to eliminate the ombudsman’s office altogether, a move Kaufman says was meant to silence his complaints. He’s still at the agency, but has been shifted away from his watchdog role.

“What’s going on in the Gulf is the same cover up that was going with the 9/11 environmental issue,” said Kaufman. “The Bush White House ordered EPA to lie about the environmental and public health situation at the World Trade Center because of economic ramifications. So they did.”

“I’ve been through this before,” he continued. “It was the same kind of crap.”

It’s hard to say whether anyone is taking Kaufman seriously this time around. He’s compiled a lengthy list of email contacts, from reporters to NGO leaders and green celebrities like Ed Begley, Jr., all of whom he sends almost daily emails on the subject. Since his September 11 whistleblowing, he’s basically been forced into bureaucratic exile within the agency, pushing papers rather than keeping watch over the agency’s work, like he could in his former role. He asserts that they can’t fire him at this point; it would only make the agency look worse.

“He’s an activist working inside of the agency,” said Jeff Ruch, executive director of Public Employees for Environmental Responsibility (PEER), a group that represents whistleblowers in federal agencies. The group is part of the co-counsel for Kaufman’s ongoing lawsuit regarding the elimination of the ombudsman’s office.

But Kaufman is not alone in his concern. According to Ruch, at least 10 other EPA staffers, including several toxicologists, have come to PEER to raise concerns about dispersants and other health problems in the Gulf, claiming that their superiors at the agency are not doing due diligence when it comes to dispersants. “[EPA] appears to be making decisions at the behest of BP and not exercising much, if any, independent judgment,” says Ruch.

To wit: When Sen. Barbara Mikulski (D-Md.) asked Lisa Jackson whether the EPA could force BP to stop using the toxic chemicals on the spill at last Thursday’s hearing, Jackson first said she didn’t have the authority to weigh in: “I would not know,” she said. “I’m not an attorney.” Jackson assured Mikulski that the EPA’s lawyers would get back to her office with the specifics on their authority. In the past, however, Jackson and the EPA have insisted that they do have that control—they gave BP the go-ahead to use dispersants underwater and have issued guidelines on how much of the chemicals the company is supposed to be using.

Asked to clarify Jackson’s remarks, the EPA explained in a statement Monday that the use of dispersants on the surface of the Gulf is pre-approved in the Area Contingency Plan, the response plan that each region of the country is required to draft under the 1990 Oil Pollution Act in preparation for a potential spill. The EPA is only charged with greenlighting specific brands of dispersant for use in the event of a spill. The statement also said that the EPA only controls dispersant use underwater, while the federal on-scene coordinator—a representative from the Coast Guard—controls surface spraying.

The EPA also said that it reserves the right to discontinue use of a dispersant if it deems the substance too hazardous. But so far, the agency has been reluctant to crack down on the chemicals. Citing concerns about Corexit, BP’s dispersant of choice, the agency told BP to find an alternative almost two months ago. When the company chose to ignore that directive, instead of forcing the issue, the EPA pledged to do its own tests on both Corexit and the alternatives, and instead told BP to scale back dispersant use. BP continued to use a large volume of dispersants in the ensuing weeks, with the Coast Guard regularly granting permission to use more than the directive called for. At this point, the EPA’s tests are essentially worthless for this particular oil spill, as BP has already dumped 1.84 million gallons of Corexit into the Gulf.

Jackson says that her agency is concerned about the dispersants, but it’s not going to force BP to stop using the chemicals because the agency believes they are still safer than the oil itself. “The number one enemy is the oil,” Jackson said a May 24 press conference. Yet she has said repeatedly that the EPA didn’t know enough about the long-term impacts of the chemicals to ban them. “With the use of dispersants, we are faced with environmental trade-offs,” Jackson told the panel last week. “The long term effects on aquatic life are largely unknown.”

But Kaufman says you can’t have it both ways—either you know it’s safe enough to say it’s better than the oil, or you don’t know enough. “They’re admitting they have the evidence to make a balancing test,” says Kaufman. “If they have the evidence, then why testify they don’t? Which way is it?” He says there is more than enough evidence, between a 2005 National Academy of Sciences study and the warnings that come with the dispersant products to show that they’re problematic.

Despite his long history of griping about the EPA, Kaufman says his criticism of the agency is nothing personal. “I’m not partisan,” he says. “I just want an honest EPA because I was there when we formed it 40 years ago.”