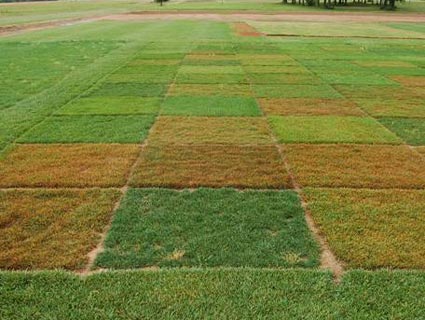 It’s a hoary bureaucratic trick, making a controversial announcement on the Friday afternoon before a long weekend, when most people are daydreaming about what beer to buy on the way home from work, or are checking movie times online. But that’s precisely what the US Department of Agriculture pulled last Friday.

In an innocuous-sounding press release titled “USDA Responds to Regulation Requests Regarding Kentucky Bluegrass,” agency officials announced their decision not to regulate a “Roundup Ready” strain of Kentucky bluegrass—that is, a strain genetically engineered to withstand glyphosate, Monsanto’s widely used herbicide, which we know as Roundup. The maker of the novel grass seed, Scotts Miracle Gro, is now free to sell it far and wide. So you’ll no doubt be seeing Roundup Ready bluegrass blanketing lawns and golf courses near you—and watching anal neighbors and groundskeepers literally dousing the grass in weed killer without fear of harming a single precious blade.

Which is worrisome enough. But even more worrisome is the way this particular product was approved. According to Doug Gurian-Sherman, senior scientist at the Union of Concerned Scientists’ Food and Environment Program, the documents released by the USDA’s Animal and Plant Health Inspection Service (APHIS) along with the announcement portend a major change in how the feds will deal with genetically modified crops.

Notably, given the already-lax regulatory regime governing GMOs (genetically modified organisms, click here for a primer), APHIS seems to be ramping down oversight to the point where it is essentially meaningless. The new regime corresponding with the bluegrass announcement would “drastically weaken USDA’s regulation,” Gurian-Sherman told me. “This is perhaps the most serious change in US regs for [genetically modified] crops for many years.”

Understanding why requires a brief history of the US government’s twisted attempts to regulate GMOs. Since the Reagan days, federal regulatory efforts have been governed by what’s known as the Coordinated Framework for Regulation of Biotechnology. Despite its name, the Coordinated Framework amounts to a porous hodgepodge of regulations based on the idea that overseeing GMOs required no new laws—that the novel technology could be effectively regulated under already-existing code.

The new regime laid out in the bluegrass announcement would “drastically weaken USDA’s regulation” of genetically modified crops.

Long story short, it means that the USDA theoretically regulates new GMO crops the same way it would regulate, say, a backyard gardener’s new crossbred squash variety. Which is to say, it really doesn’t. But that’s absurd. GM crops pose different environmental threats than their nonmodified counterparts. The most famous example involves the rapid rise of Roundup Ready corn, soy, and cotton, which were introduced in the mid-late 1990s and now blanket tens of millions of acres of US farmland. Spraying all of that acreage every year with a single herbicide has given rise to a plague of Roundup-resistant “superweeds,” forcing farmers to apply more and more Roundup and also resort to other, far-more-toxic products. Crops that aren’t engineered to withstand an herbicide could never have created such a vexation.

From the start, in a tacit acknowledgement that modified crops really are different, the USDA has resorted to a fiction that allows it to at least nominally regulate GMOs, Gurian-Sherman told me. A ’50s-era law called the Plant Pest Act gave the USDA power to restrict the introduction of organisms that might, well, harm plants. Genetically modified crops technically qualified as “plant pests” because industry scientists used DNA “promoters” derived from natural plant pathogens, most notably cauliflower mosaic virus, to amplify the genetic traits they introduced into new crops. “These promoters ensure that the desired trait is always ‘on,’ that is, expressed,” Gurian-Sherman explains.

The promoters—short stretches of DNA—are not themselves expressed by the engineered plant. In other words, the cauliflower mosaic virus used to bolster, say, Roundup Ready soybeans, poses no threat to actual cauliflower plants. In addition to promoters, GMO developers also use plant-pest substances at other points in the genetic-modification process—but again, they don’t express themselves in the finished project. “The Plant Pest Act was always just a regulatory hook to give the USDA authority to regulate engineered crops,” notes Gurian-Sherman. “Everyone—the industry, industry watchdogs, the USDA—always knew it was a fiction.”

“The Plant Pest Act was just a regulatory hook,” says Gurian-Sherman. “Everyone—the industry, industry watchdogs, the USDA—always knew it was a fiction.”

Yet the fiction has endured. The industry accepted it, Gurian-Sherman says, because cursory oversight gave companies from a “fig leaf…They could say that their crops are regulated and have been deemed ‘safe’ by the USDA.” GMO foes accepted it as well, he adds, because without the plant-pest fiction, the USDA would have no authority to regulate genetically modified crops. Indeed, this plant-pest business has given activists important tools to force better oversight. For instance, the USDA is required by the National Environmental Policy Act to assess the environmental impact of the novel crops it regulates, and by the Endangered Species Act to gauge potential impact of GM crops on endangered species. Well, in recent years, the Center for Food Safety has successfully sued the agency for failing to conduct proper environmental-impact statements and endangered-species analyses for crops it removed from its plant-pest list.

Then, in 2000, Congress passed the Plant Protection Act, which broadened the Plant Pest Act slightly, adding one more regulatory hook (Gurian-Sherman’s words) to the USDA’s sparse GMO-regulation toolkit. That was the “noxious weed” status—any engineered crop that threatens to go rogue in the field and become a hard-to-control weed may be regulated.

That, roughly speaking, is where things stood. Until last Friday.

Obviously, a regulatory regime based on a lie was never really durable. Gurian-Sherman says the plant-pest schtick has been wearing thin for years now, because the industry has begun using nonpest material to develop novel crops. “If the companies don’t use plant pests, then the USDA ostensibly doesn’t have a legal hook to regulate the crops,” he says. To compensate, Gurian-Sherman says, the agency has resorted to tacitly acknowledging that it has no jurisdiction, but doing so quietly to avoid exposing the fiction.

But the agency’s decision on Scotts Miracle Gro’s Roundup Ready bluegrass may have changed all that. Scotts essentially shattered the code of silence in a Sept. 13, 2010 letter (PDF) to the USDA, which the agency released Friday. The company declared:

Based on that impeccable logic, the company went in the for the kill: “Scotts requests that [USDA] confirm that Kentucky bluegrass modified
without plant pest components…is not a regulated article within the meaning of the current regulations.”

In its July 1 response, the USDA agreed: “[N]one of the organisms used in generating this genetically engineered (GE) glyophosphate tolerant Kentucky bluegrass…are considered to be plant pests,” so Roundup Ready bluegrass “does not meet the definition of a ‘regulated article’ and is not subject” to the Plant Protection Act. In other words, go forth and multiply.

On Friday, the agency also retracted its only other hook for regulating GM crops—the noxious-weeds provision. The Center for Food Safety had petitioned the USDA to classify genetically modified bluegrass as a noxious weed. The case for this is strong: Gurian-Sherman explains that bluegrass has light pollen that can be carried for miles on the wind, meaning that genetically modified bluegrass can easily transfer its genes to established conventional bluegrass.

And like most grasses, bluegrass spreads rapidly. Anyone who has ever grown a garden can testify that it’s tough to get rid of unwanted turf grass. In fact, Scotts is also seeking deregulation of Roundup Ready bentgrass, another grass that has proven hard to control. In 2005, Scotts grew trial plots of its bentgrass in Oregon. It escaped the boundaries of the experimental plot and is still creating problems for homeowners miles away.

In one of the documents (PDF) released last Friday, the USDA conceded that, by its own reckoning, Scotts’ genetically modified bluegrass “can be considered for regulation as a Federally listed noxious weed that shows potential to cause damage to crops and natural resources of the United States.” But to avoid actually declaring it a noxious weed, the agency simply claimed that the weed risks posed by genetically engineered and conventional are “essentially the same.”

That’s highly debatable, since anyone who wants to address weed problems from conventional bluegrass can turn to Roundup, the nation’s most-used herbicide, whereas dealing with rogue Roundup Ready bluegrass means resorting to chemicals far more toxic. Starting with the “essentially the same” premise, the USDA notes that conventional bluegrass is already widely planted across the country without causing much harm; from there it assumes that Scotts’ engineered bluegrass won’t be a problem either, concluding that it need not be declared a “noxious weed” after all. And if it’s neither a plant pest nor a noxious weed, the USDA has no right or obligation to regulate it. Game, set, match to Scotts Miracle Gro. Or, to use a more appropriate sports metaphor: a hole in one for Scotts!

So where does this leave us? If the plant-pest fiction no longer applies (Gurian-Sherman says fewer and fewer novel crops rely on it), and if even crops that carry an obvious noxious-weed risk won’t be regulated as such, then what happens?

Well, if the USDA doesn’t regulate novel GMOs, then it has no obligation to perform environmental-impact or endangered-species analyses of new organisms in the biotech pipeline, including plants engineered as pharmaceutical substances and biofuel feedstocks. In an email exchange, a USDA press officer confirmed that the agency would not be conducting an environmental-impact statement on Roundup Ready bluegrass—and by extension, any other crops that don’t count as plant pests or noxious weeds.

The USDA “is a rogue agency…It has been rebuked time and time again by the courts for its failed oversight of these crops.”

And that means watchdogs like Center for Food Safety will no longer have a legal foothold to sue the USDA for regulating those things badly—which is usually how it’s done. In the wake of several recent deregulations—including Roundup Ready sugar beets, alfalfa, and bentgrass—federal courts have sided with Center for Food Safety and rebuked the USDA for failing to properly assess risks. Are such lawsuits, essentially the last line of defense for GMO regulation, a thing of the past? “We’re still analyzing the documents,” says George Kimbrell, the center’s senior attorney.

But Kimbrell made an important point: “Look, [the USDA] is a rogue agency,” he said. “It has been rebuked time and time again by the courts for its failed oversight of these crops.”

Implication: Take away the plant-pest and noxious-weed hooks and the courts can no longer intervene. The industry gets free rein to plant whatever it wants—wherever it wants. This development worries Gurian-Sherman. “Will some companies still want to have the fig leaf of USDA regulation even if they’re not using plant-pest material? Probably,” he says. “But they don’t have to. It’s now their choice.”

Moreover, he adds, “the noxious-weed standard has been set so high as to be virtually meaningless.” The message to industry is clear: “You can completely skirt the regulatory process.”