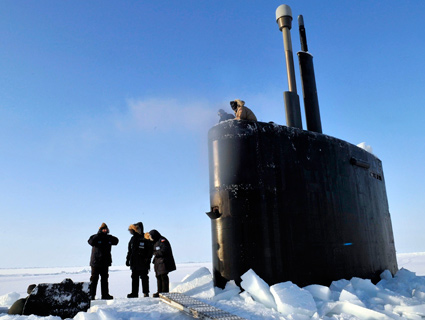 For Navy Capt. Tim Gallaudet, global warming isn’t a political matter—it’s a practical one. Over the next few decades, Arctic summers are expected to become ice-free, creating another ocean for the Navy to factor into its long-term planning. “The ice,” he says, “doesn’t vote.”

Gallaudet, who holds a Ph.D. in oceanography, is the deputy director of the Navy’s climate change task force, which was established in 2009. It’s part of a growing effort by the military and intelligence communities to get a grip on the national security implications of global warming.

Not surprisingly, some of these programs have received a chilly reception from congressional Republicans. Sen. John Barrasso (R-Wyo.), one of Congress’ fiercest opponents of taking official action on climate change, has made it his mission to kill the CIA’s Center on Climate Change and National Security; he once offered a budget amendment to shutter the office. “The CIA’s resources should be focused on monitoring terrorists in caves—not polar bears on icebergs,” he has said. Barrasso’s measure failed, but other Republican lawmakers—including the chairman and ranking member of the House and Senate intelligence committees, respectively—have also expressed skepticism about the CIA’s climate work.

Such complaints are “little more than a smoke screen,” says Thomas Fingar, the former chairman of the National Intelligence Council, which pulls together the assessments of the intelligence community for policymakers. The real motivation, he says, is politics. In 2008, Fingar, now a fellow at Stanford University, took the lead in drafting the first national intelligence assessment on the security challenges presented by climate change. It found that global warming will further destabilize already-volatile parts of the world and should be considered in national security planning. But congressional Republicans dismissed the report as “a waste of resources.”

In fact, monitoring environmental factors isn’t much of a departure for intelligence analysts—who have long kept tabs on variables like changing weather patterns, which can affect food production, as a predictor of regional instability. “The Earth system is actually relatively simple when you compare it to people,” Gallaudet says.

People may be harder to read, but given the track record of the GOP caucus, it’s a relatively safe prediction that climate programs of all stripes remain at high risk. Earlier this year, congressional Republicans placed at least 11 programs on the chopping block; they succeeded in axing the National Oceanic and Atmospheric Administration’s Climate Service. In this political climate, it’s no wonder the CIA declined to discuss its global-warming research for this article. For the time being, the climate spooks have gone underground.