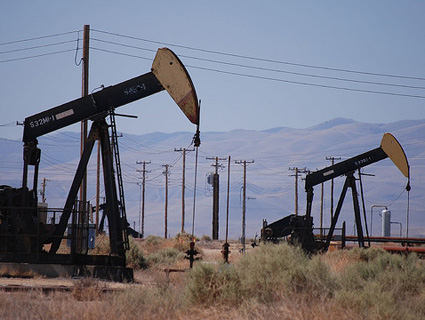 It was the summer of 2008, and the entire country was outraged over $4 gas. It seemed like everyone had bought into the idea that the solution to high gas prices was more drilling for oil: Sarah Palin and other prominent Republicans had taken up the “Drill, baby, drill” refrain. Democrats in Congress, so afraid of consumer backlash, let the 27-year-old moratorium on new drilling in the outer continental shelf quietly expire. But what most people didn’t realize at the time was the role that big financial players like Goldman Sachs—not simple supply and demand—played in pushing gas prices sky-high.

That is, until last month, when someone leaked confidential documents detailing the positions of Wall Street speculators—including Goldman Sachs, Morgan Stanley, JPMorgan Chase, Deutsche Bank, and Barclays—from a single day that fateful summer, June 30, 2008. More than 200 companies held investments in millions of barrels of oil that day, many of them companies that neither produce nor use oil.

The documents laid bare the extent to which big banks’ speculating has begun to affect oil prices: Traditionally, those who produce and buy oil have been the big players in the futures market, making calculations about how much oil will cost in the future and drafting contracts to provide that oil at a set price down the line. But now financial players are also in the game, bidding on oil that they’ll never make or use—a development that many say is artificially raising the price of crude.

According to the office of Sen. Bernie Sanders (I-Vt.), an anonymous source provided the confidential regulatory data from the Commodity Futures Trading Commission (CFTC). The senator’s office then gave the documents to the Wall Street Journal, which set off a whole heap of outrage from the traders whose identities and positions were revealed. The companies that were outed say that their trading information is proprietary, and that its release imperils their business.

But Sanders’ office argues that the data is now three years old, so there’s no good reason to keep it secret. Sanders has been using the information to push the CFTC to issue rules that would actually crack down on speculators, in the interest of preventing that kind of spike in the future. The Dodd-Frank Wall Street Reform and Consumer Protection Act, signed into law in July 2010, granted the CFTC authority to craft new rules on commodities speculation, including oil. Those rules were supposed to be completed by January 2011, but so far the agency has only issued a draft.

The senator’s office contends that the CFTC is violating Dodd-Frank by not issuing the rules. “We believe they are breaking the law right now,” said Warren Gunnels, a senior policy advisor to Sanders. “They’re being disingenuous at best by saying they need more information. They have all the information they need.”

In June, Sanders introduced legislation that would force the CFTC to finalize the rules required by Dodd-Frank and set firm speculation rules for crude oil, gasoline, diesel fuel, jet fuel, and heating oil. The bill calls for rules that set position limits to “diminish, eliminate, or prevent excessive speculation.”

Some are hoping that, in addition to limits on speculation, the CFTC will call for more transparency in the commodities markets. In a letter to CFTC Chairman Gary Gensler last week, Tyson Slocum, the director of the energy program at the watchdog group Public Citizen, asked the CFTC to make company-specific information publicly available within two weeks of the day the speculators offered them.

Slocum believes that identifying the big players in the market will provide transparency, as well as accountability for those who are causing prices to rise. This could lead to public outrage—which might make speculators less likely to behave recklessly. “If it becomes common knowledge that these banks control the vast majority of the market at time when the price of oil is spiking,” said Slocum, “there’s going to be heat applied to them.”

Watch an animated video, produced by the Center for Investigative Reporting, that explores the “external costs” of gas consumption—including the price of pollution and health problems caused by it: