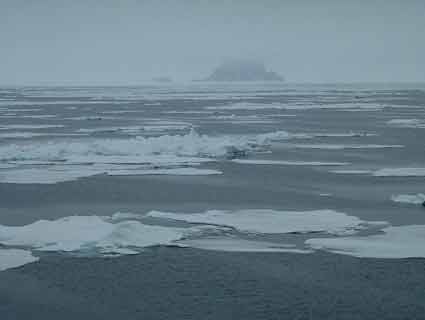 We are a few hundred miles from the north pole. The air temperature is -3C, the sea freezing. All around us in these foggy Arctic waters at the top of the world are floes – large and small chunks of sea ice that melt and freeze again with the seasons.

Arne Sorensen, our Danish ice pilot, is 60 feet up in the crow’s nest of the Arctic Sunrise vessel. Visibility is just 200 yards and he inches the 1,000-tonne Greenpeace ice breaker forward at two knots through narrow passages of clear water. The floes are piled up and compressed in fantastic shapes and shades of grey and blue; they crack, rumble and groan as we nudge them aside or climb over them. Two polar bears on our port side lift their heads but resume hunting.

Read more about Arctic sea ice, which has shrunk to the smallest extent ever recorded.

Sorensen has sailed deep into ice at both poles for 30 years, but this voyage is different, he says. The edge of the Arctic ice cap is usually far south of where we are now at the very end of the melt season. More than 600,000 square kilometres (sq km) more ice has melted in 2012 than was ever recorded by satellites before. Now the minimum extent has been nearly reached and the sea is starting to refreeze.

“This is the new minimum extent of the ice cap,” he says, the “frontline of climate change“.

“It is sad. I am not doubting this is related to emitting fossil fuels to a large extent. It’s sad to observe that we are capable of changing the planet to such a degree.”

The vast polar ice cap, which regulates the Earth’s temperature and has been a permanent fixture in our understanding of how the world works, has this year retreated further and faster than anyone expected. The previous record, set in 2007, was officially broken on 27 August when satellite images averaged over five days showed the ice then extended 4.11 million sq km, a reduction of nearly 50% compared to just 40 years ago.

But since 27 August, the ice just kept melting – at nearly 40,000 sq km a day until a few days ago. Satellite pictures this weekend showed the cap covering only 3.49m sq km. This year, 11.7m sq km of ice melted, 22% more than the long-term average of 9.18m sq km. The record minimum extent is now likely to be formally called on Monday by the US National Snow and Ice Data Centre (NSIDC) in Colorado.

The record hasn’t just been broken, it’s been smashed to smithereens, adding weight to predictions that the Arctic may be ice-free in summer months within 20 years, say British, Italian and American-based scientists on board the Arctic Sunrise. They are shocked at the speed and extent of the ice loss.

The Cambridge University Sea ice researcher Nick Toberg, who has analysed underwater ice thickness data collected by British nuclear submarine HMS Tireless in 2004 and 2007, said: “This is staggering. It’s disturbing, scary that we have physically changed the face of the planet. We have about 4m sq km of sea ice. If that goes in the summer months that’s about the same as adding 20 years of CO2 at current [human-caused] rates into the atmosphere. That’s how vital the arctic sea ice is.

“In the 1970s we had 8m sq km of sea ice. That has been halved. We need it in the summer. It has never decreased like this before”.

“We knew the ice was getting thinner but I did not expect we’d lose this much this year. We broke the record by a lot”, says the NSIDC scientist Julienne Stroeve.

“This suggests the ice has got to a point where it’s so thin it doesn’t matter what the weather is, it’s going to melt in the summer. This could become the new normal.”

“The acceleration of the loss of the extent of the ice is mostly because the ice has been so thin. This would explain why it has melted so much this year. By June the ice edge had pulled back to where it normally is in September,” she says.

“The 2007 record was set when you had weather conditions which were perfect for melting. This year we didn’t have those. It was mixed. So this suggests the ice has got to a point where it’s so thin it doesn’t matter what the weather is, it’s going to melt in the summer. This could become the new normal,” says Stroeve.

In the past Stroeve has shown that ice melt has been happening far faster than the models predicted. Her new research, published last month in the journal Geophysical Research Papers, shows humans may have been responsible for most of the ice loss in recent decades.

“It suggests 60% of the observed decline in ice extent in Septembers from 1953-2011 was due to human activity. The decline is linked to the increase in temperatures,” she says.

“This year is significant. At the moment the [ice extent] is below what the next Intergovernmental Panel on Climate Change (IPCC) report will show in 2014. We are on the extreme edge of the models, suggesting that ice loss is happening much faster than the models suggested,” says Stroeve.

All over the Arctic the effects of accelerating ice loss and a warming atmosphere are being seen. The ecology is changing rapidly as trees and plants move north, new beetles devastate whole forests in Canada, Siberia and Alaska, and snowfall increases. Inuit and other communities report more avalanches, the erosion of sea cliffs and melting of the permafrost affecting roads and buildings. Whole coastal communities may have to be moved to avoid sea erosion.

With the ice loss has come a rush by industry for Arctic resources. Oil, gas, mining and shipping companies are all expanding operations into areas that until only 20 years ago would have been physically impossible. They bring new opportunities for trade, but new threats to the environment. On Monday, a historic first drilling operation by Shell in the Chukchi Sea off Alaska was halted after sea ice was seen moving towards the oil company’s drill ship.

Other new research suggests that the loss of ice could be could be affecting the path and speed of the jet streams, possibly explaining why extreme weather in the northern hemisphere is lasting longer.

“There is evidence of stronger and more intense north Atlantic storms and extreme weather, says Stroeve. “We are thinking we are entering a new climate state. Until we get the next push and reach a new equilibrium.”

From now on until June, the Arctic sea ice will refreeze. First it will be glassy, thin “shuga”, “grease” or “pancake” ice, unable to bind the floes together. But within weeks, the whole icecap will visibly reform, growing up to 100,000 sq km a day until the melt season begins again next year.

But, says Toberg, because of the massive melt this year, there will be less old, or multiyear, ice which is thicker and less prone to melting. The new ice formed this winter will be weaker and more vulnerable to melt, hastening the loss of ice next year. “It is preconditioned to melt”, he says.

Now, “feedbacks” are thought to be hastening the ice retreat. In recent summers, say ice experts, Arctic sea surface temperatures have been well above normal, partly because there is less ice to reflect heat back into the atmosphere. The darker open waters now absorb more solar radiation, accelerating the melt.

“The ice is weak so it opens up water and allows more sunlight in which warms the water more which makes the ice break up more – so it accelerates the melt. There is hardly any old, multi-year ice left, so first year ice is now dominant. We are seeing less and less old thick ice,” says Toberg.

The longer term implications of the great melt of 2012 are hard to call, say climate scientists who caution that more research is needed. Sea ice plays a critical role in regulating climate, acting as a giant mirror that reflects much of the sun’s energy, helping to cool the Earth.

What is suspected is that the formation of the sea ice produces dense salt water which sinks, helping drive the deep ocean currents. Without the summer sea ice, many scientists fear this balance could be upset, potentially causing major climatic changes.

“The Arctic ice cover is a lid on the planet that regulates the temperature. By taking it off you are warming it. Temperatures [everywhere] depend on it,” says Toberg.

Sea ice extent has varied naturally over the decades with some Russian data suggesting similar or even greater ice loss in some local areas in the 1930s. But the models are clear, says Stroeve. If you omit the observed records, keeping CO2 levels at pre-industrial levels, then none show a decline of ice cover. When you do put CO2 into the models, they all show a decline, she says.

“Just because there was possibly less ice in some areas at other times, that doesn’t mean it’s not human-induced now”.

“We can expect the Arctic to be ice-free in summer within 20 years, she says. “The ice won’t go away the whole year. It will still be cold enough in the Arctic to freeze in winter. But by 2030 I’d say we will have an ice-free summer Arctic. That does not mean that natural ice variability cannot bring it back again, but the trend, we think, will be downward.”

“This is a defining moment in human history,” said Kumi Naidoo, director of Greenpeace International in Amsterdam. “In just over 30 years we have altered the way our planet looks from space and soon the north pole may be completely ice-free in summer.

“Fossil fuel companies are still making profits despite the fact that climate change is so clearly upon us. Our politicians are putting corporate interests above scientific warnings and failing in their duties to the public”.