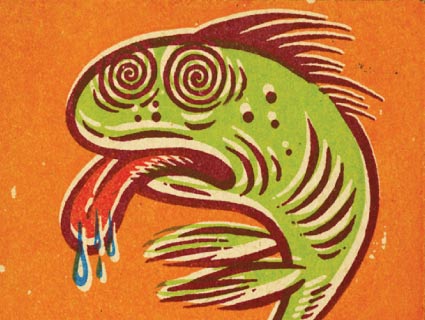 Next time you tuck into a Red Lobster “Endless Shrimp” special or score some $7-per-pound salmon at a supermarket, consider this: You’re very likely eating imported seafood raised on a factory-style farm in Asia—and it almost certainly was never inspected by the Food and Drug Administration on its way into the country and onto your plate.

Is that…safe? Big retailers like Walmart and restaurant chains like Darden (owner of Red Lobster) say yes, in part because some of the seafood they buy bears the Best Aquaculture Practices label. Who issues that label? The Global Aquaculture Alliance, an industry endeavor—its board consists of representatives from (you guessed it) Darden, as well as Cargill, the Chilean salmon industry, and a large farmed-shrimp importer called Eastern Fish Company. Not surprisingly, BAP standards for farmed fish placed near the bottom (16 of 20) in a 2012 ranking of aquaculture labels by the University of Victoria’s Seafood Ecology Research Group. (Darden says it independently tests its shrimp for contaminants but declined to share its results; Walmart did not answer our questions about inspections.)

But the responsibility for ensuring the safety of our food doesn’t fall to retailers and restaurants alone. The oversight authority belongs to the FDA, and the task is massive. In 2011, Americans consumed 4.7 billion pounds of seafood, 91 percent of which was imported. And yet the FDA only inspects a tiny amount of this giant haul: 2 percent at most. (The equivalent agency in Canada inspects 15 percent of imported seafood; in the European Union the figure is 50 percent.)

That’s worrisome because imported seafood has a spotty track record. According to a recent study by the Centers for Disease Control and Prevention, 44 percent of the 39 foodborne-illness outbreaks caused by imports from 2005 to 2010 involved seafood—more than any other type of food.

And then there’s the drug problem. Like US meat farms, Asia’s shrimp operations rely heavily on antibiotics to control diseases among creatures packed tightly together, and also to make them grow faster. That creates the risk of antibiotic-resistant pathogens in the final product. In a 2012 study, FDA scientists tested 330 samples of shrimp farmed in Thailand—the No. 1 US shrimp supplier—and bought in Little Rock, Arkansas, supermarkets. Sixty-seven turned up positive for strains of the bacteria klebsiella that are resistant to a range of antibiotics—32 of them showed resistance to no fewer than eight different antibiotics. The researchers concluded that “imported shrimp is a reservoir for multidrug-resistant Klebsiella,” which can trigger urinary-tract infections and pneumonia.

And it’s not just nasty bugs that can end up in our seafood. Testifying before Congress in 2008, Don Kraemer, then-deputy director of the FDA’s Office of Food Safety, warned of “clear scientific evidence” that drug residues make it into the fish we eat. In 2011, the FDA tested just 0.1 percent of imported seafood products for drug traces. In 2008, the agency tested only 34 shrimp samples for residues of nitrofurans—a class of antibiotics banned because they’re carcinogenic. Six samples tested positive.

The FDA does inspect processing facilities in exporting countries, the most prolific of which are China, Thailand, Canada, Vietnam, Indonesia, and Ecuador. But here, too, the program is lax. According to a scathing 2011 report by the Government Accountability Office, the agency had inspected just 1.5 percent of seafood processing facilities in the previous six years in China, the source of nearly a quarter of US seafood imports. Meanwhile, in Vietnam, a Bloomberg Businessweek investigation discovered that some US-bound shrimp are stored in heaps of ice made from water teeming with bacteria. And tilapia in a growing number of China’s fish farms literally feed on pig manure—even though it contains salmonella and makes the fish vulnerable to disease.

In an October letter to the FDA, the Southern Shrimp Alliance, a trade group for the US wild-caught shrimp industry, identified three Vietnamese shrimp processors that were ordered to put their products through mandatory testing in Canada after authorities there found traces of fluoroquinolones, a banned antibiotic. Yet all three can still export freely to the United States. Another major Vietnamese shrimp supplier to the US, Soc Trang Seafood Joint Stock Company (which, incidentally, is BAP-certified), had three different shipments turned back by Japan in 2012 due to the presence of banned chemicals—but the United States routinely welcomed its products.

Since I don’t have much faith in either the industry’s self-certifying effort or the FDA’s porous testing program, I’ve taken to eating shrimp only as an occasional treat. When I do indulge, I pay up for the wild-caught kind. But it shouldn’t be left to each of us to protect ourselves. Just as the government inspects Red Lobster’s kitchens, so too should the FDA scrutinize the suppliers that keep them stocked with endless shrimp.