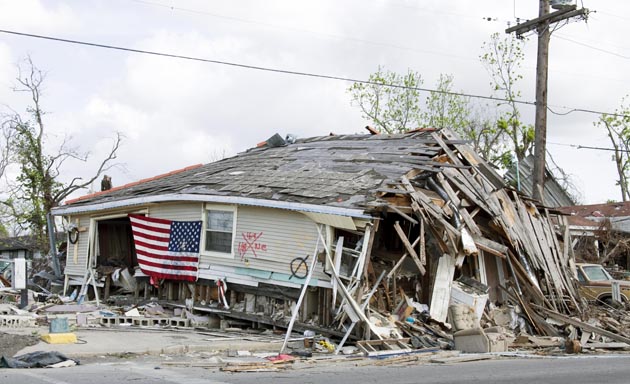 When disaster strikes the same place twice, distant observers can be left scratching their heads, wondering why residents of high-risk areas return, again and again, to rebuild. Whether it’s the Lower Ninth Ward in New Orleans, the communities along Tornado Alley, or low-lying coastal areas in the Sandy-affected region, it might seem like an easy solution to pick up and move away—to people who don’t actually live in those places.

But the reality is that no word inflames more than “retreat”—as in moving people, even whole towns, away from danger. And altering landscapes to ward off danger from climate change can run afoul of heartfelt and robust interests. Besides their economic investments, people and organizations have all sorts of sunk costs in local communities. “Retreat”—and even more modest alternatives—arouses significant resistance.

Ensuring more resilient communities in the future will require us to find ways to make adaptations more palatable to more people, in part by considering local concerns in the design of resilient infrastructure.

Consider, for example, that people are consumers of space in ways that go beyond having houses, apartments, back-yard gardens, and a place for the RV. They have friends, family and obligations nearby. Location, especially residential location, is the node around which people manage life with routines, like having specific shopping habits close to home. Even when they can be financially “made whole” in an offer to retreat, residents may not want the deal. Hence there are “hold-outs” who resist even robust financial inducements. Private developers trying to assemble large parcels know this all too well: people often want to remain for reasons that money can’t overcome.

Local politicians can also play a role in the “hold-out” dynamic. Political careers are built on jurisdictional arrangements, so altering landscapes can shift who lives where and re-order the make-up of constituencies. Office holders may perceive threats. Local activists may also be distressed by the prospect of changing demographic make-up. New Orleans is now a famous case in which shifting communities helped elect a white mayor, after a pre-Katrina string of African-Americans in the leadership position.

Then there are the existing agencies, both private and public, which have evolved divisions of labor and spheres of responsibility both within and across borders. Some practices are formally stated but others have emerged through informal relations over time. Altering the nature of infrastructure, codes, operating procedures, or maintenance schedules challenge routine and hard-earned repertoire for getting things done. There are new costs in terms of organizational and equipment adaptation, sourcing supplies, and making funding applications.

Shifts in the number or nature of residents also affects those with real estate interests. When these high-risk areas are being considered, the focus turns to the individual homeowner’s resistance to adapt. But this leaves out an influential group: those who hold property as an investment or for enhanced return under future development scenarios. Anything that increases development costs (for example, requiring raised foundations, or imposing higher taxes to maintain floodways or berms) can induce resistance.

Even though reforms aimed at resilience might impose expenses—higher building costs on undeveloped land, for example—there are of course benefits in the long term, and sometimes the not-so-long term. These reforms may make formerly unusable land into developable property, and the advertised existence of new safeguards may add value for potential consumers, something we already see with marketing green building technologies. In the past, determining that sites were outside of flood zones allowed prospective owners to secure the legal right to build and to obtain loans. New arrangements for climate change adaptation could similarly enhance—not hamper—the potential for development.

The “hold-out” problem can be addressed through programs and attitudes that mobilize community partnerships—instead of treating it as a financial transaction. The current strategy, land assemblage, ordinarily works by raising the amount being bid for a given land parcel. An alternative would be to put a greater premium on community inclusion to make sure that all members of the community become active participants in making climate-related adaptations, rather than just a collection of isolated sellers.

Oftentimes, these climate protections are framed as costly obligations. It is important to recognize, though, that most any intervention contains opportunities for collateral benefits. Designers know that any type of new requirement or problem to be solved is an opportunity to do it better the next time around and maybe even enhance lives in ways that people did not even envision in the first place. Wetland restoration, for example, creates amenities for fishing and boating recreation. Making room for the river provides space for new soccer fields. Putting up a dyke invites a new bike path, pedestrian corridor or running course. The ugly floodwalls of New Orleans—dubiously useful as they proved to be when floods actually occurred—might become media for graffiti festivals, light shows, or happenings the likes of which the world has never seen. The point is to use new types of adaptations to reward participation, including to incite, excite, and deliver pleasure. Steps like these can encourage community buy-in, and serve beyond direct utility as genuine life improvement.