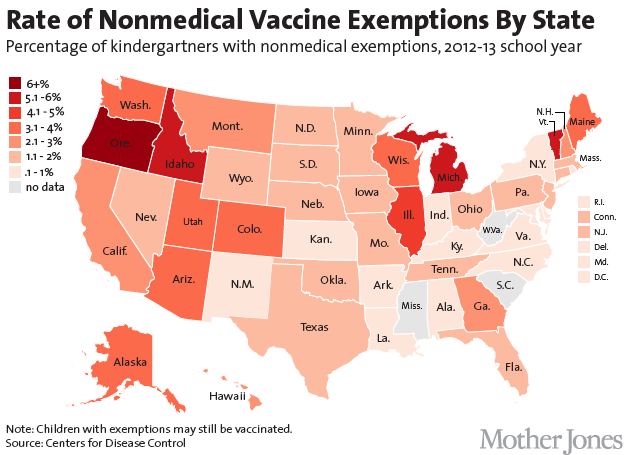 It’s easy to find bad information about the safety of vaccines on the internet. That’s, well, the internet. But what’s scarier is that in many states, parents who buy into those myths can easily opt out of immunizing their children. In some cases, it’s no harder than checking a box on a school form saying that vaccines are against their “personal beliefs.”

In a 2012 study of vaccine exemption policies across the country, a team of researchers led by Saad Omer, a professor of public health at Emory University, found that of the 20 states that allowed personal-belief exemptions for enrollment in a public school or child care program, less than a third made it “difficult” to do so (for instance, by making parents reapply for one each year, explain their beliefs in writing, or get a notarized letter of approval from a health care provider). In the nine “easy” states identified in the study, the rules required only signing a form. Indeed, Omer suspects that some parents sign vaccine exemption forms not because they actually hold anti-vaccine beliefs, but simply because it’s easier than juggling the doctors’ appointments, missed work, and other inconveniences of getting kids vaccinated. (More about that here.) 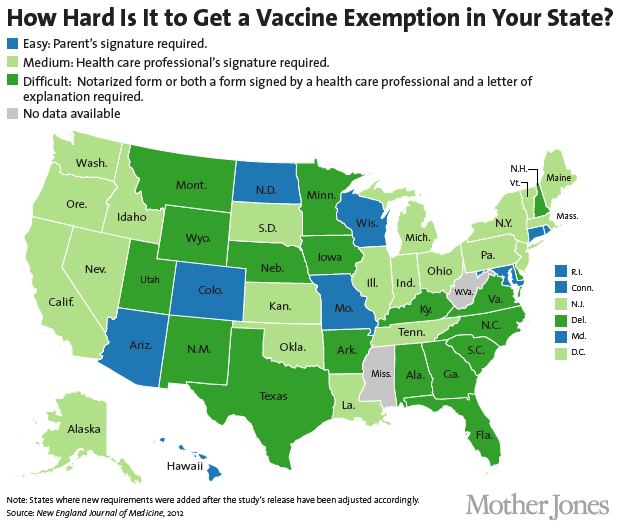 Unsurprisingly, Omer’s research also shows that states that make it easy to get a nonmedical exemption see a corresponding dip in numbers of schoolchildren who get their shots. Rates of nonmedical exemptions in the “easy” states were 2.3 times higher than rates in states with difficult exemption policies. Not only that, but that rate is climbing faster in easy states than it is in difficult states.

Rates of nonmedical exemptions from school immunization, according to type of exemption and ease of obtaining one, 2006–2011 Saad Omer et al, New England Journal of Medicine

Nonmedical vaccine exemptions are dangerous because they threaten what’s known as “herd immunity:” Diseases simply can’t spread in a community where a high enough percentage of the population is vaccinated against them. The required percentage of vaccinations to ensure herd immunity varies by disease; for pertussis (whooping cough), it’s between 93 and 95 percent, according to Johns Hopkins University’s Jessica Atwell, lead author of a study on pertussis and vaccines published last year in the journal Pediatrics. So if even a seemingly small number of kids across the state aren’t getting their shots, the immunity rate of the entire community can drop below safe levels. When that happens, lots of people are put at risk: infants who are too young to get shots, children who haven’t had their full series of shots yet, and those who can’t get vaccinated for medical reasons such as pregnancy or immune-system problems. And, of course, the exempted, unvaccinated children are also at risk.

With a personal-belief exemption rate four times the national average, Marin County had the second-highest rate of whooping cough in the state of California.

In California, the percentage of kindergartners who get their full set of shots has been dropping since 2008, while the rate of personal-belief exemptions jumped by nearly a percentage point in that time. Given that the national average exemption rate is 1.8 percent, that’s a big increase. During a California outbreak of pertussis in 2010, more than 9,000 cases were reported, and 10 infants died. It was the worst outbreak of whooping cough in 60 years.

In the Pediatrics study, Atwell and her fellow researchers identified 39 geographic “clusters” across California—ranging in size from a few blocks to entire counties—where belief-driven opt-out rates are higher than the norm. The team found higher rates of whooping cough associated with these clusters. For example: Marin County, which had a personal-belief exemption rate of 7.8 percent in 2012—nearly four times the national average—has the second-highest rate of whooping cough in the whole state. These results support the findings of a 2006 study led by Emory’s Omer, which found higher rates of pertussis in states that allowed personal-belief exemptions and had easy policies for doing so.

California is not the only state with high-exemption hotspots. On Vashon Island, Washington, 17 percent of kindergartners failed to receive their shots in 2013 due to a “personal/philosophical” exemption. That’s nine times the current national average. The year before, Vashon Islanders accounted for 16 percent of all whooping cough cases in Washington’s King County, despite housing just one percent of its population. And a 2008 study of exemption rates in Michigan found 23 clusters within the state, and, you guessed it, a correlation with higher rates of whooping cough. Even individual schools and churches can serve as ground zero: After a measles outbreak broke out in north Texas in 2012, the state epidemiologist linked it to a local megachurch whose pastor had spread anti-vaccine myths in the past.

After Washington made it harder to obtain a personal-belief exemption, the exemption rate dropped by 40 percent in just two years.

Now, some states are rethinking the personal belief loophole. Reeling from the 2010 outbreak, California passed a law making it harder to get a personal-belief exemption. As of January 1, parents seeking a personal-belief exemption have to obtain the signature of an authorized health care provider. (Finding such a doctor may not be easy; recent studies show that more pediatricians are choosing to drop patients who refuse to vaccinate their children.)

But not all states that currently allow personal-belief exemptions are looking to tighten the rules for getting one. In a study released last week in the Journal of the American Medical Association, Omer and his colleagues surveyed the legislative landscape of vaccine exemptions, state by state. They found that of 36 bills introduced across the country last year, 31 sought to expand access to exemptions. While none of these passed, they far outweighed the number of restrictive bills; five were introduced, and three of these passed, in Washington, Vermont, and California. 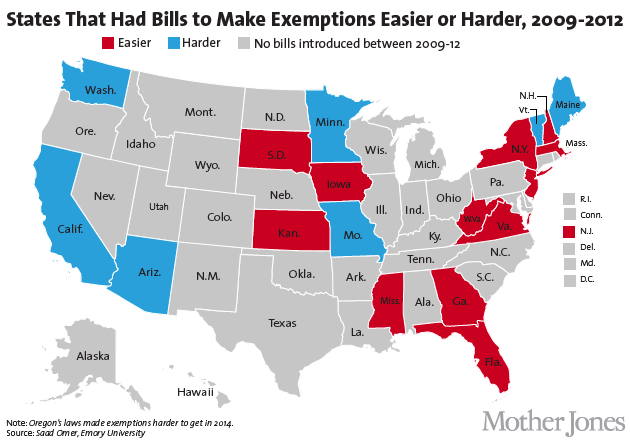 There’s evidence that tightening exemption laws makes a difference. After reaching an exemption rate of 7.6 percent in 2009, Washington state passed a law requiring parents to get a doctor’s signature if they wanted to opt out of their children’s vaccinations. In just two years, the exemption rate plummeted by more than 40 percent. Pertussis vaccination rates climbed to 92.4 percent in the past school year, representing “the highest pertussis vaccine completion rate for kindergartners since the state began to collect this data in the 2006-2007 school year,” according to the Washington Department of Health.

Now Colorado wants to follow suit. The state is tied for ninth in the nation (with Maine) for the number of kindergartners who show up at school with vaccine exemptions—nearly 3,000 of Colorado kindergartners in the 2012-13 school year, according to the Centers for Disease Control and Prevention. To get a personal belief exemption, parents need only fill out a single form. Recently, a task force led by the state health department released a set of recommendations for lowering the state’s high opt-out rate. Among them: publicizing the percentage of immunized kids at every public school or child care center in the state.