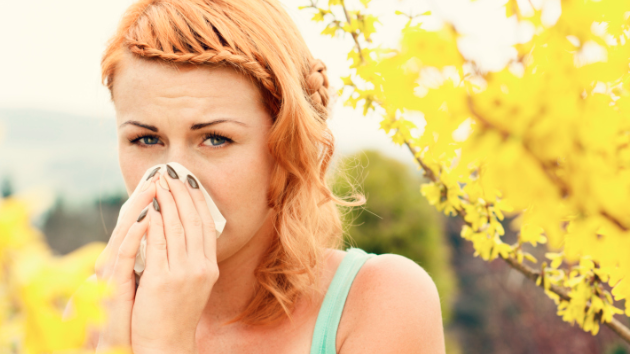 One week ago, I purchased the first asthma inhaler I’ve owned since the 8th grade. I’d shown up at my doctor’s office short of breath, and a lung function test promptly revealed that I was inhaling about one-fifth as much air as a healthy 24-year-old should be. “We’re expecting a lot of cases like you,” my doctor told me as he wrote my prescription. “It’s going to be a hell of a pollen season.”

And for that, you can blame the polar vortex—the extreme cold system that repeatedly hovered over much of the United States this year—along with the rest of this winter’s brutal weather. Those cold snaps helped spawn a spring allergy season so intense that it already has its own headline-ready nickname: the “pollen vortex.”

“The long winter, the particularly cold weather, it all pushed the pollen season back quite a bit,” says Estelle Levetin, the chair of the biology department at the University of Tulsa. Individual flowering trees probably aren’t producing more pollen, Levetin says—but they’re all dumping their pollen at once, making this allergy season particularly difficult for people who are sensitive to more than one type of pollen.

The simple reason is that flowers are temperature-sensitive. They don’t open up and release pollen when it’s cold. “If you look at daily pollen levels, typically, you would see them track the temperature,” Levetin says. Trees that normally would have bloomed several weeks ago are just budding now. In Oklahoma, where Levetin lives, the first allergenic trees blossomed “easily a month late.”

The Asthma and Allergy Foundation of America counts 45 million people in the United States who suffer from nasal allergies, and another 25 million with asthma—both conditions that can be can be aggravated by pollen. Those figures come with sweeping economic consequences. Every year, asthma costs $18 billion in hospital visits and lost workdays, according to the AAFA.

This week may offer some relief, thanks to the relationship between cold weather and pollen counts. People living in the West are already experiencing lower pollen levels due to the cold front moving across the country. When it hits, the cold slows the release of pollen. But unless a region undergoes freezing temperatures for several days, says Levetin, once warm weather returns, so will the pollen deluge.

While no single weather event—the cold snaps that caused this year’s pollen vortex, for example—can be directly attributed to global warming, the science community is engaged in a lively debate over whether climate change is making unusual weather events, including severe cold temperatures, more likely. Jennifer Francis, a research professor at Rutgers University, argues that the rapidly warming Arctic has caused the jet stream to slow, which could result in atmospheric events, such as winter storms, staying put for longer.

But even if climate change can’t be blamed for this year’s pollen vortex, there is substantial evidence that a warming planet spells a more agonizing allergy season. Cold weather may have caused the current pollen backlog, but over the long term, the opposite may be true. Hotter temperatures, an increase in atmospheric carbon dioxide, and greater precipitation levels in some regions of the United States all conspire to create near-ideal conditions for the weedy plants that give off allergenic pollen, according to a 2008 study from the Environmental Protection Agency. “Warmer temperatures and increased precipitation cause some plants to grow faster, bloom earlier, and produce more pollen,” the study found. “Temperature changes are expected to alter allergy seasons to begin earlier and last longer and the distribution of allergenic plant varieties to change over time.”

The EPA is hardly alone in saying that climate change could make allergy season more hellish. A 2010 report by the National Institute of Environmental Health Sciences warns, “There is also a possibility that certain aeroallergens may become more allergenic as temperatures and CO2 concentrations increase.” (Besides exacerbating the pollen count, climate change is linked in some regions to a rise in ozone, fine particles, and dust—all of which can cause or worsen respiratory diseases, the report found.)

Plant physiologists have observed that the weeds that produce many allergens have adapted the best to an atmosphere that is chock-full of carbon dioxide, Scientific American reported in 2012. Pollen from ragweed, for instance, which peaks in the summer and is one of the most common triggers for allergies, has exploded as the climate has warmed. From 1995 to 2011, according to the EPA, the ragweed allergy season grew up to 24 days longer in regions across the Midwest: 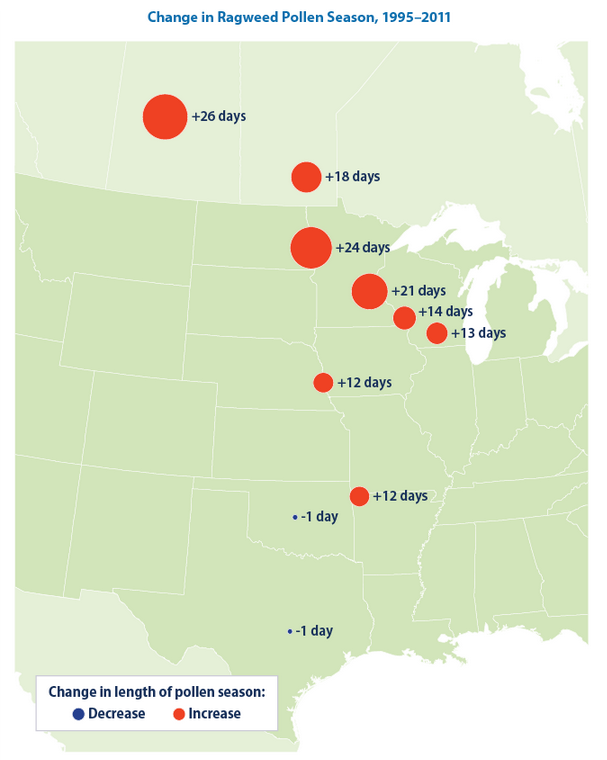 As the map suggests, northern regions of the United States, where warming in more pronounced, will bear the brunt of increases in most types of environmental allergens. Warmer temperatures are already allowing hickory and oak, two highly allergenic tree species, to thrive in new regions. In the United Kingdom, the Health Protection Agency has observed that the hay fever season is growing longer.

The future may offer a reprieve from agonizing allergy seasons. Leonard Bielory, an environmental sciences professor at Rutgers, predicted in Scientific American that a warming planet will eventually cause pollen counts to taper off. “It cannot continue on a linear scale,” he said. “If heat goes up to a certain temperature, plants will die. It will hit a breaking point.” Of course, at that point, a prolonged allergy season won’t be high on the list of problems.