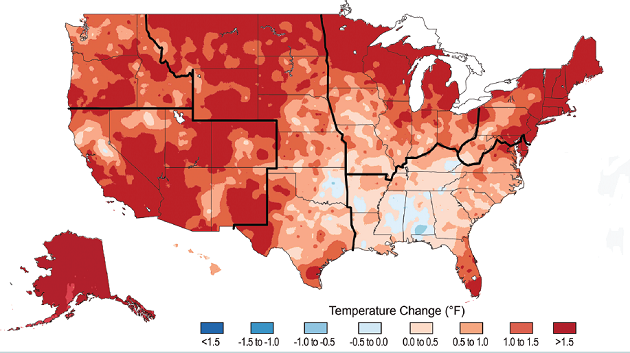 The new National Climate Assessment, being launched today by the Obama administration, is a landmark document.

It is a landmark because unlike the reports of the United Nations’ Intergovernmental Panel on Climate Change, it is written in plain language that ordinary mortals can understand. (“Evidence for climate change abounds, from the top of the atmosphere to the depths of the oceans.” “Data show that natural factors like the sun and volcanoes cannot have caused the warming observed over the past 50 years.”)

It is a landmark because unlike past National Assessments, this report is not being buried or ignored. Rather, President Obama is using it to launch a very impressive communications campaign aimed directly at Americans via one of their most trusted scientific sources, TV meteorologists.

But most of all, it is a landmark because it shows, unequivocally, that we simply do not live in the same America any more, thanks to climate change. It is a different place, a different country. Here are some of the most striking examples of how:

1. America is much hotter than it was before. According to the assessment, the 2000s were the hottest decade on record for the United States, and 2012 was quite simply the hottest year ever (for the contiguous US).

2. That translates into extreme heat where you live. Of course, nobody feels temperature as a national average: We feel it in a particular place. And indeed, we’ve felt it. The National Climate Assessment makes clear that extreme heat waves are striking more than before, and climate change is involved. Take Texas’ extreme heat in the summer of 2011, the “hottest and driest summer on record” for the state, with temperatures that exceeded 100 degrees for 40 straight days! “The human contribution to climate change approximately doubled the probability that the heat was record-breaking,” notes the assessment.

Oh, and if we continue to mess around, it gets a lot, lot worse: By 2100, a “once-in-20-year extreme heat day” will occur “every two or three years over most of the nation.”

Projected decline in water stored in snow across the Southwest National Climate Assessment.

3. America is parched. According to the assessment, the Western drought of recent years “represents the driest conditions in 800 years.” Some of the worst consequences were in Texas and Oklahoma in 2011 and 2012, where the total cost to agriculture amounted to $10 billion. The rate of loss of water in these states was “double the long-term average,” reports the assessment. And of course, future trends augur more of the same, or worse, with the Southwest to be particularly hard hit. As seen in the image at right, projected “snow water equivalent,” or water held in snowpack, will decline dramatically across this area over the course of the century.

4. But when it rains, the floods can be devastating. At the same time, climate change is also exacerbating extreme rainfall, because on a warmer planet, the air can hold more water vapor. Sure enough, the United States has seen record rains and floods of late, including, most dramatically, a June 2008 Iowa flooding event that “exceeded the once-in-500-year flood level by more than 5 feet,” according to the assessment.

5. There is less of America. Thanks to global warming, the United States has shrunk. That’s right: Sea level around the world has risen by eight inches in the last century, swallowing up coastline everywhere, including here. Granted, “eight inches” in this case is just an average; the actual amount of sea level rise varies from place to place. But the risk is clear: When a storm like Sandy arrives, those living on the coasts have less protection. Quite simply, they’re closer to the danger.

Such is the condition for quite a lot of Americans: Almost 5 million currently live within four vertical feet of the ocean at high tide, according to the assessment. In the future, they’re going to live even closer than that, as sea level is projected to increase by one to four feet over the coming century.

Oh, and then there’s the infrastructure. “Thirteen of the nation’s 47 largest airports have at least one runway with an elevation within 12 feet of current sea levels,” notes the assessment.

6. Alaska is becoming unrecognizable. Nowhere is global warming more stark than in our only Arctic state. Temperatures there have increased much more than the national average: 3 degrees Fahrenheit since 1949, or “double the rest of the country.” The state has the United States’ biggest and most dramatic glaciers—and it is losing them rapidly. Meanwhile, storms batter coasts that used to be insulated by now-vanished sea ice.

And the ground is literally giving way in many places, as permafrost thaws, destabilizing roads, infrastructure, and the places where people live. Eighty percent of the entire state has permafrost beneath its surface. The state currently spends $10 million per year to repair the damage from thawing permafrost and is projected to spend $5.6-$7.6 billion repairing infrastructure by 2080.

7. America is ablaze. More drought, and more heat, means more wildfires. And sure enough, the United States has been setting numerous records on this front. In 2011, Arizona and New Mexico had “the largest wildfires in their recorded history, affecting more than 694,000 acres.” The same went for scorching Texas that year; it also saw unprecedented wildfires and 3.8 million acres consumed in the state. That’s “an area about the size of Connecticut,” notes the assessment.

And then there is Alaska, where “a single large fire in 2007 released as much carbon to the atmosphere as had been absorbed by the entire circumpolar Arctic tundra during the previous quarter century.” Because, on top of everything else, increasing wildfires actually make global warming itself worse, by releasing still more carbon from the ground.

In sum, you don’t live in America any more. To borrow a page (or, a title) from Bill McKibben’s book Eaarth, perhaps we should say you live in Ameriica. It is a different place, a different country, and by now, everybody is noticing.