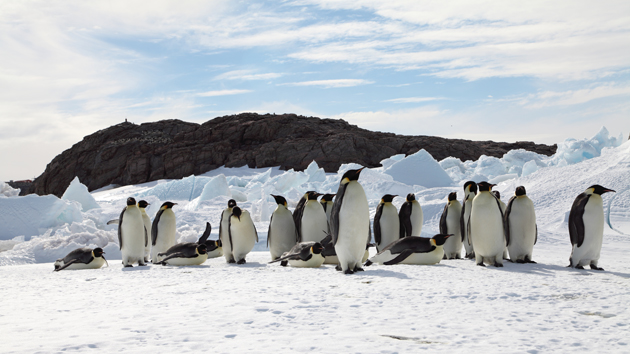 A group of Emperor penguin adults make their way across sea ice in Terre Adélie in East Antarctica. The seabirds rely on sea ice for breeding and raising their young, but declines in sea ice from warmer temperature may be affecting all colony by the end of the century.Courtesy Stephanie Jenouvrier

Recently, polar biologists at the University of Minnesota used satellite images of poop stains (scientists are nothing if not resourceful) to show that some colonies of Emperor penguins in Antarctica are uprooting historic nesting sites, possibly to escape warming temperatures. 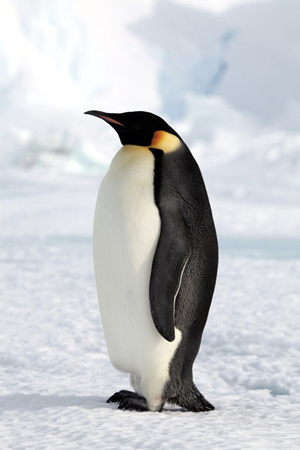 Today, a new study in Nature makes an even more grim prognostication about the future of the species: Thanks to declining concentrations of sea ice, two-thirds of Antarctica’s Emperor penguin colonies could lose more than half their population by 2100. Across the entire species, that translates to a 19 percent drop. Some colonies are larger than others, so a 50 percent decline in one group might be only a few individuals, while the same change in a larger group could be hundreds.

Less sea ice makes it more difficult to access krill, the tiny shrimp-like crustaceans that are the penguins’ primary food source, said study coauthor Julienne Stroeve, a researcher at the National Snow & Ice Data Center. “Then, there are these large mortality rates for the penguins.”

Scientists have long known that animals at the poles are especially vulnerable to global warming, which is happening in the Arctic and Antarctica faster than the rest of the world. In the Arctic, disappearing ice and rising temperatures are pushing species of whales, seals, and bears to hybridize, jeopardizing their genetic health. In Antarctica, earlier research has found that ocean warming could reduce the habitat available for krill by 20 percent, compounding the sea ice problem.

Earlier this year we explained the dangers that climate change pose for baby Puffins in the Gulf of Maine.

Today’s study is just the latest reminder of the vital role ice plays in the Antarctic ecosystem. And there’s little doubt that Antarctica’s ice is in serious trouble: Earlier this year a trove of research emerged indicating that one of the continent’s major ice sheets is already in irreversible decline.

The map below, from the study, shows which penguin populations are most at risk. The purple-to-white color gradient shows changes in mean sea ice concentration between the twentieth and twenty-first centuries (it’s a bit counter-intuitive; purple is the least decline and white is the most). Each colored dot is a penguin colony, with the color indicating the colonies’ projected conservation status (see key below) by 2100. You can see that the most-threatened populations (red dots) are those nearest to the white space where sea ice has declined the most. 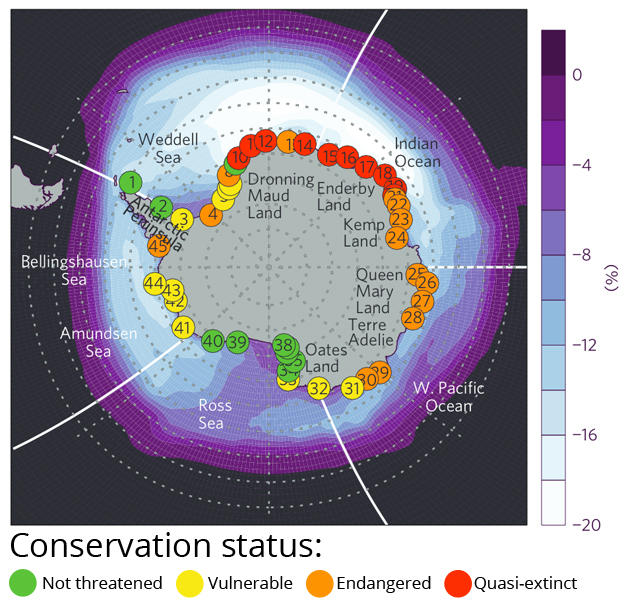