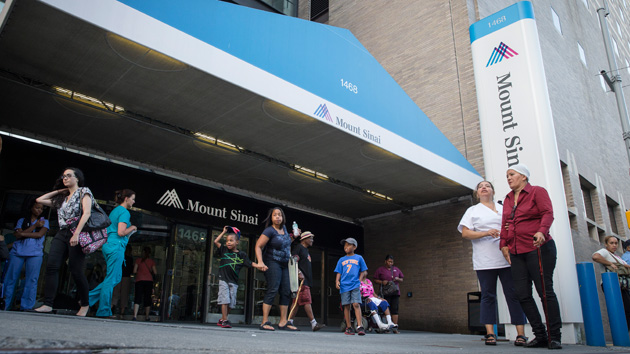 A man who was recently in West Africa is being tested for the deadly Ebola virus at Mount Sinai hospital in Manhattan, hospital officials confirmed on Monday, after he arrived overnight with symptoms that may be consistent with the virus.

“All necessary steps are being taken to ensure the safety of all patients, visitors and staff,” Mount Sinai officials said in a statement.

But that didn’t stop the inevitable rush of panic on Twitter from New Yorkers and others around the country worried about a potential spread of the disease, which has claimed 887 lives, mainly in West Africa. But, unlike African countries already suffering the misery of the biggest outbreak ever recorded, the American public has little to fear, says Dr. Jonathan Epstein, an Ebola expert and a veterinary epidemiologist with EcoHealth Alliance, an international organization of scientists that studies biodiversity and conservation.

Here is an edited transcript of our conversation about how New Yorkers, and the rest of the country, should think about this news. In short: Don’t freak out. They’ve totally got this.

Mother Jones: What happens now? Should we be worried?

Jonathan Epstein: We certainly shouldn’t be overly surprised if additional cases inadvertently make their way to the United States from Africa. We know that there are direct travel routes from countries in West Africa to the United States. So it’s certainly well within the realm of reason that people who have been exposed to Ebola would board a plane to get to the United States, even without knowing that they are infected.

Now, once they are detected and hospitalized, our public health systems here are really good. We have exactly what’s needed to control Ebola, and that is to rapidly identify a case with confirmatory diagnostic testing. Those tests are truly available here, whether it’s through the Centers for Disease Control and Prevention in Atlanta, or state health agencies, or the hospitals themselves.

Isolation is critically important with Ebola, and infectious disease wards in major hospitals have the ability to isolate patients. So, provided that the patient is isolated, and the doctors and nurses take appropriate precautions in terms of their own personal protective equipment—”barrier nursing”, wearing gloves, protective clothing, that sort of thing—all of the things are in place at hospitals in the United States to really limit the ability of Ebola to be spread from person to person. I really do have a high confidence that if cases do make it to the United States that they’ll be identified, and traced back, and addressed.

MJ: The mind instantly goes to the situation before a patient reaches the emergency room, or even in the emergency room itself, or those that may have shared a subway stop. How do we assess the level of risk on that front?

JE: The fortunate thing about Ebola virus, as opposed to other viral infections which are easily transmitted through respiratory routes and are airborne like influenza, is that it doesn’t become transmissible until a person is symptomatic, and feeling pretty sick. That’s not to say they still might not go out into the public or have interactions with people, but at the point at which they do get identified by a health care provider, their contacts, their history since they became symptomatic in the past few days or so, will then be traced back by public health authorities.

“I really do have a high confidence that if cases do make it to the United States that they’ll be identified, and traced back, and addressed.”

We’re paying very careful attention to flights coming in from West Africa, and people who are already symptomatic who might arrive at the airport would be detected by public health screens there. There’s high confidence that we’d identify people.

JE: We’ve experienced an infectious disease outbreak. If you remember the influenza H1N1 outbreak of 2009, there were cases in New York City. Public health systems were in place, and very well-equipped to diagnose them rapidly, and a lot of education and outreach campaigns were set in motion to limit the possibility of people getting infected with influenza. There was a lot of activity with respect to prevention. New York City specifically is prepared for infectious disease outbreaks of this nature.

“New York City specifically is prepared for infectious disease outbreaks of this nature.”

MJ: What should people be aware of if this case escalates in such a big city like New York?

JE: What people need to realize is that even though Ebola is a virus that can have scary symptoms, and has this scary reputation, it’s not extremely transmissible. You need very close contact with a sick, clinically symptomatic patient, so it’s very unlikely that a person arriving with Ebola would set off a huge chain-reaction and cause a massive outbreak, that’s just not a likely scenario. We have very good people conducting surveillance both in New York and nationally to make sure that something like that doesn’t happen. So the conditions here are entirely different than they are in rural Africa, or Central or West Africa where Ebola outbreaks have occurred.