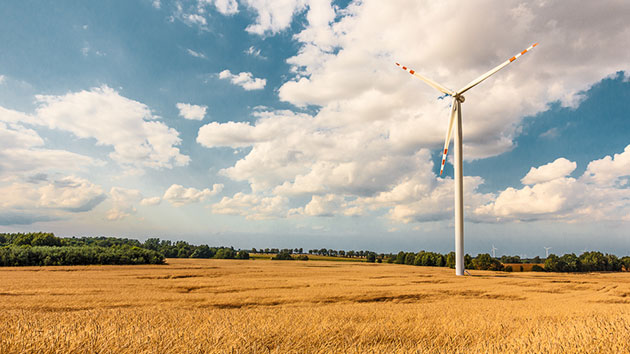 Yesterday President Obama threatened to veto a $440 billion package of tax breaks negotiated by a bipartisan group of legislators led by Senate Majority Leader Harry Reid (D-Nev.). The bill, a White House spokesperson said, disproportionately benefits businesses over families. The bill excludes a child tax credit for the working poor that had been a top goal for Obama, but makes permanent a group of tax incentives for big businesses that had been provisional.

But if Obama does kill the deal, he’ll also create a casualty that seems odd for a president who in recent weeks has made climate change a central issue: The tax credit for wind energy, which Reid’s bill would resuscitate for a few years before phasing out in 2017.

The Production Tax Credit (PTC) provides wind energy developers a tax break of 2.3 cents per kilowatt hour of energy their turbines produce for the first ten years of operation, which industry supporters say is a important lifeline to help wind compete against heavily-subsidized fossil fuel power sources. For over a decade, wind power has been locked in a boom-and-bust cycle as the PTC expires and then is re-upped by Congress: Every time the credit stalls or looks like it might disappear, contracts dry up, manufacturers shut down production, and jobs get cut. The same could happen again soon: The PTC expired again last year, and so the fate of Reid’s tax bill will be the fate of a cornerstone of America’s clean energy economy.

Any project that broke ground before the PTC expiration last year still got to keep the credit, so the wind industry is still on an up cycle. So far this year, wind accounts for 22 percent of new energy capacity, second only to natural gas, according to federal data. And with or without subsidies, wind is now one of the cheapest electricity sources out there. Those are critical pieces of the puzzle if the US is to meet President Obama’s new goal to reduce the nation’s carbon footprint 26-28 percent by 2025.

“The momentum will peak next year, and then we’ll start to feel the effects,” Shurey said. “Without the PTC extension, the main US manufacturers are going to start running out of orders by 2016.”

The Reid bill throws a bone to conservative lawmakers and advocacy groups who have called the PTC a handout for an industry that should be able to support itself by now: gradually phasing out the credit by 2017. The American Wind Energy Association, a trade group, has supported such a plan, saying it would give manufacturers, developers, and other wind investors a degree of certainty about future market conditions that they don’t currently have. Shurey agrees: The actual amount of the credit is far less important, he said, than a clear, consistent signal to frame contracts and investments around.

Whatever tax deal Congress ultimately passes will probably include the PTC, says Jim Marston, vice president of US energy policy at the Environmental Defense Fund. Some of the credit’s biggest proponents are powerful Republicans from windy states, such as Senator Chuck Grassley of Iowa, who said on the Senate floor last week that gutting the PTC “would cost jobs, harm our economy, the environment and our national security.” But a veto could mean a long delay—and more of the uncertainty that the wind industry fears.