California’s worst drought on record isn’t stopping the state from growing massive amounts of nuts: The state produces over 80 percent of the world’s almonds and 43 and 28 percent of the world’s pistachios and walnuts, respectively. As Mother Jones’ Tom Philpott details in this longread, the state’s almond market in particular has taken off: What was a $1.2 billion market in 2002 became $4.8 billion market by 2012.

Why are the almond growth rates so…nuts? (Sorry.) One reason is that the average American now eats two pounds of the crunchy snack per year—more than twice as much as a decade ago. But the biggest demand is coming from abroad: The US now exports 70 percent of almonds.

The thing is, nuts use a whole lot of water: it takes about a gallon of water to grow one almond, and nearly five gallons to produce a walnut. Residents across the state are being told to take shorter showers and stop watering their lawns, but the acreage devoted to the state’s almond orchards have doubled in the past decade. The amount of water that California uses annually to produce almond exports would provide water for all Los Angeles homes and businesses for almost three years. 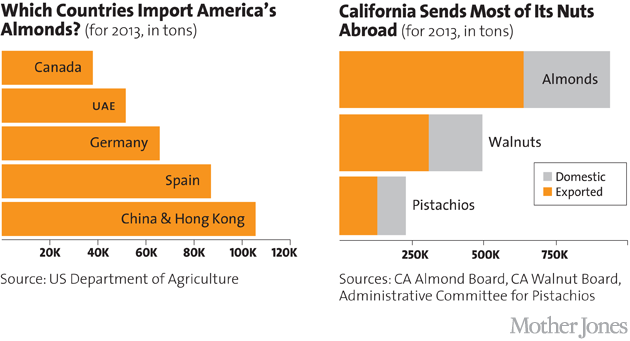 Yet the center of almond farming—and the farming of lots of the US’s fruits and veggies—is exactly where the worst the most extreme drought is taking place. To make up for the water shortage, farmers are pumping groundwater—the underground water that feeds aquifers, serving as a savings account of sorts for the state’s water supply.

As the value of treenuts soars, the water required to support crops is pumped from a groundwater supply that has been shrinking for decades.

So how does the amount of water used to create nuts stack up with the water we use in our daily life? Check out the graphic below: