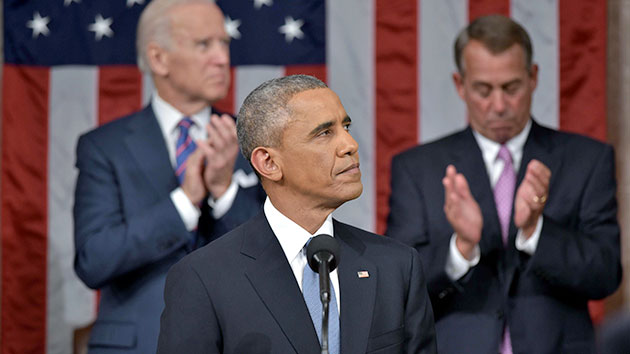 In his State of the Union address tonight, President Obama issued a direct rebuke to climate change deniers and to members of Congress who seek to block action to slow global warming.

“I’ve heard some folks try to dodge the evidence by saying they’re not scientists; that we don’t have enough information to act,” he said, referring to talking points that are popular among Republican politicians. “Well, I’m not a scientist, either. But…I know a lot of really good scientists at NASA, and NOAA, and at our major universities. The best scientists in the world are all telling us that our activities are changing the climate.”

The president referenced a report issued last week by NASA and NOAA that officially designated 2014 as the hottest year on record. He also cited the country’s ongoing clean energy boom, his bilateral climate agreement with China, and warnings from the Pentagon the global warming poses a national security threat.

Obama also took a shot at supporters of the Keystone XL pipeline. Republicans in Congress, along with some Democrats, have made approving the pipeline a top priority. The Senate is set to vote on a bill to approve the project later this week, but Obama has promised to veto it should it pass. “Let’s set our sights higher than a single oil pipeline,” he said. “Let’s pass a bipartisan infrastructure plan that could create more than 30 times as many jobs per year.”

The president walked a fine line between calling for bipartisan action and castigating his opponents on climate issues, said Elgie Holstein, senior director for strategic planning at the Environmental Defense Fund.

“I didn’t see the president’s remarks as defiance, so much as resolve,” Holstein said. “Sending a very clear message to Congress that he is resolved to stand by his position.”

The speech tended toward broad themes rather than specific policy proposals. For example, no mention was made of a new plan to cut back on emissions of methane from oil and gas operations that the White House announced last week. Still, Holstein said he thought the environmental community got what it was hoping for tonight.

Here are Obama’s full remarks on climate and energy issues, as prepared for delivery and released a few minutes before the speech began.

So let’s set our sights higher than a single oil pipeline. Let’s pass a bipartisan infrastructure plan that could create more than thirty times as many jobs per year, and make this country stronger for decades to come…

And no challenge—no challenge—poses a greater threat to future generations than climate change.

2014 was the planet’s warmest year on record. Now, one year doesn’t make a trend, but this does—14 of the 15 warmest years on record have all fallen in the first 15 years of this century.

I’ve heard some folks try to dodge the evidence by saying they’re not scientists; that we don’t have enough information to act. Well, I’m not a scientist, either. But you know what—I know a lot of really good scientists at NASA, and NOAA, and at our major universities. The best scientists in the world are all telling us that our activities are changing the climate, and if we do not act forcefully, we’ll continue to see rising oceans, longer, hotter heat waves, dangerous droughts and floods, and massive disruptions that can trigger greater migration, conflict, and hunger around the globe. The Pentagon says that climate change poses immediate risks to our national security. We should act like it.

That’s why, over the past six years, we’ve done more than ever before to combat climate change, from the way we produce energy, to the way we use it. That’s why we’ve set aside more public lands and waters than any administration in history. And that’s why I will not let this Congress endanger the health of our children by turning back the clock on our efforts. I am determined to make sure American leadership drives international action. In Beijing, we made an historic announcement—the United States will double the pace at which we cut carbon pollution, and China committed, for the first time, to limiting their emissions. And because the world’s two largest economies came together, other nations are now stepping up, and offering hope that, this year, the world will finally reach an agreement to protect the one planet we’ve got.