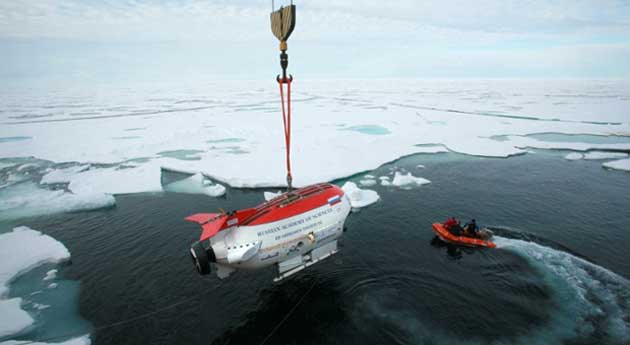 A Russian deep-diving miniature submarine is lowered from the research vessel Akademik Fyodorov moments before performing a dive in the Arctic Ocean beneath the ice at the North Pole in 2007. Vladimir Chistyakov/AP

This story originally appeared on the Guardian and is republished here as part of the Climate Desk collaboration.

Political gridlock over climate change has left the US military exposed to Russia’s superior fleets in the Arctic, flooding in its naval bases and a more unstable world, according to high-ranking former military commanders and security advisors.

Sherri Goodman, who served as Bill Clinton’s deputy undersecretary of defense and founded the security analysis firm CNA Corporation, said the US climate debate was “stuck in the past” and that climate change was “acting as a threat multiplier in the Arctic”.

The Arctic is the most rapidly warming region on Earth and its sea ice has undergone major declines in recent years and decades. Goodman said the intransigence of US politics had left a technology deficit in the far north—a place where the two increasingly tense powers are separated by just 82 kilometers.

“Right now we have a fleet, a very small fleet of ageing icebreakers. The Russians and other countries have vastly more ice-breaking capability and other capabilities to be present in the Arctic. We will need to have a greater presence in the Arctic of various types,” she said.

“We’re still having debates about whether this is happening, as opposed to what we should do about it,” she said. “We need to guard against the failure of imagination when it comes to climate change. Something is going to happen in the future years, and we’re not going to be prepared.”

“Unfortunately all we have to look at are the events of the day in Crimea and Ukraine and we see that the Russians are making some noises about, ‘well, you know, maybe the Arctic is another place we should compete rather than cooperate,'” he said.

Brigadier general Stephen Cheney, CEO of the American Security Project and a foreign affairs advisor to the State Department, said the security concerns extended beyond the Arctic to the very foundation of US military power—its naval bases.

“I can start here in the continental United States where we’ve got 30 naval bases both here and overseas. Naval bases by the nature of course are on the coast. Coasts are threatened as the sea level rises, and I can give you two very prominent examples, the Naval Air Station in Norfolk, Virginia, for instance. Eglin Air Force base in Florida, another one, has already flooded in this past year when they had to shut it down for the first time in its history,” he said.

But he said the concerns were not limited to the US’s ability to defend itself. Climate change was already causing wars around the world. He gave the example of Tuareg farmers in Mali, displaced by drought and radicalized by conflict, who have destabilized the west African country. “We know climate change caused this,” he said.

It was important, said Cheney, that the military recognized its own contribution as the largest polluter in the world’s second highest polluting country. Weaning the defense force off fossil fuels is an active policy that would solve a security and supply problem as well as bring down carbon emissions.

“Many conflicts throughout our history have been based on resource competition,” said General Charles Jacoby, who was the commander of the US North Command—the primary line of defense against invasion for the US mainland—until last year. He said that this competition would only intensify in the future, with energy and water supply at the top of the list.

Jacoby said climate change was a “legitimate mission that we readily embrace.” He said the military had to be pragmatic and the politicking around climate change, on which the Republican party has grown increasingly extreme, was ultimately irrelevant.

“It can be considered a politicized issue. And it can be considered something that one party is more interested in, another party less interested in. I’m a soldier. I’m a requirements guy. I’m a mission accomplishment guy. And so for me, it’s be in favor of what’s happening. And so, I deal with the facts. Whatever the cause, is less relevant to me than the effect,” he said.

On Tuesday the Guardian revealed US conservatives had directed $125 million toward groups in an effort to seed doubt over the existence of global warming and derail the Obama administration’s climate policies.

Christine Todd Whitman, a Republican who governed New Jersey and served as director of the Environmental Protection Agency under George W. Bush, said the Republican stance on climate change was “frustrating and puzzling” citing the GOP’s history of environmental stewardship.

“It was Richard Nixon who established the Environmental Protection Agencies. I mean, it’s ours. It’s our issue. It’s conservation. It’s conservative. This is an issue we should be talking about in a rational way. Let’s not politicize it, let’s not demand that everybody be absolutely for or absolutely against climate change,” she said.

Henry Paulson, Bush’s treasury secretary, appeared to disagree with Whitman’s assessment of the Republican attitude to climate change. “I think that there are plenty of Republicans that understand that this is a huge problem and we need to deal with it. And there are plenty of Democrats that don’t want to deal with it,” he said. This is despite just five Senate Republicans voting for a measure to recognize the significant contribution of humans to climate change—the bill was defeated.

The EPA’s director under the first president Bush, William Reilly, said he was also bemused by his party’s undermining of climate action. But he said he was hopeful of change.

“Young people of all stripes including young Republicans are very supportive of both acknowledging that we have a climate problem and humans are contributing to it,” he said.