In the early 1900s, Lewis Hine left his job as a schoolteacher to work as a photographer for the National Child Labor Committee, investigating and documenting child labor in the United States. As a sociologist, Hine was an early believer in the power of photography to document work conditions and help bring about change. He traveled the country, going to fields, factories, and mines—sometimes working undercover—to take pictures of kids as young as four years old being put to work.

Partly as a result of Hine’s work (as well as that of Mary Harris Jones, who Mother Jones is named after), Congress passed the Keating-Owens Child Labor Act in 1916. It established child labor standards, including a a minimum age (14 years old for factories, and 16 years old for mines) and an eight-hour workday. It also barred kids under the age of 16 from working overnight. However, the Keating-Owens Act was later ruled unconstitutional, and lasting reform to federal child labor laws didn’t come until the New Deal.

In 2004, retired social worker Joe Manning set out to see what had happened to as many of the kids in Hine’s photos as he could find. He’s documented his findings—showing the lives of hundreds of subjects—on his website, MorningsOnMapleStreet.com. 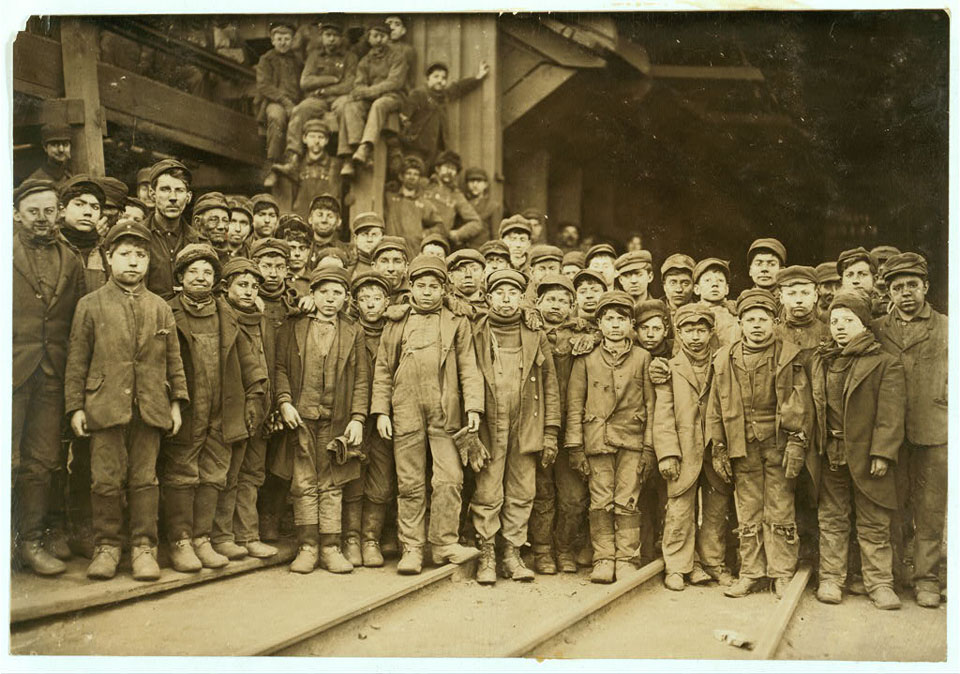 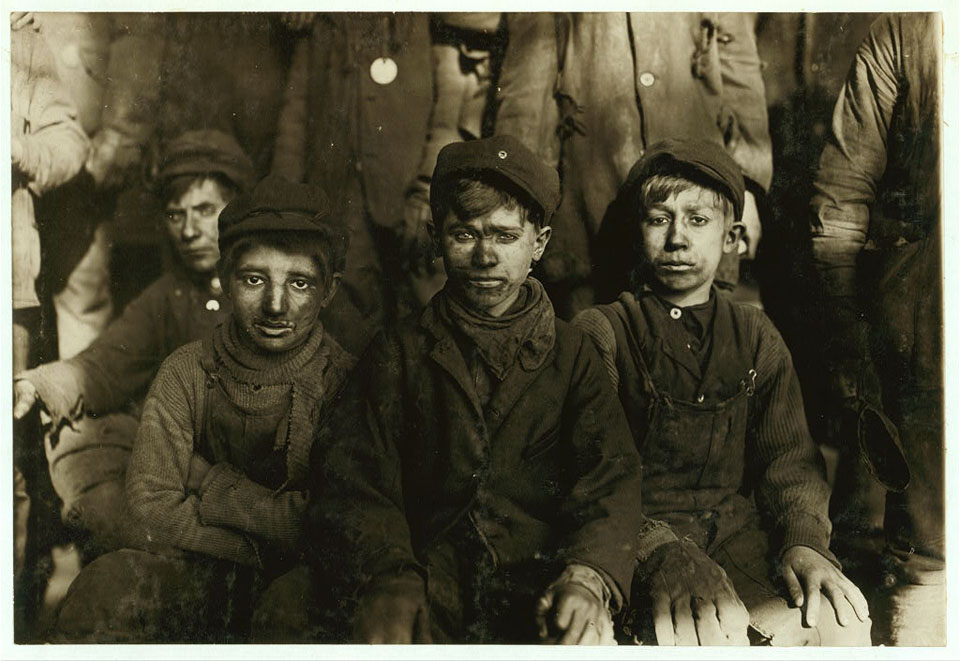 A group of breaker boys in Pittston, Pennsylvania. The smallest is Sam Belloma. 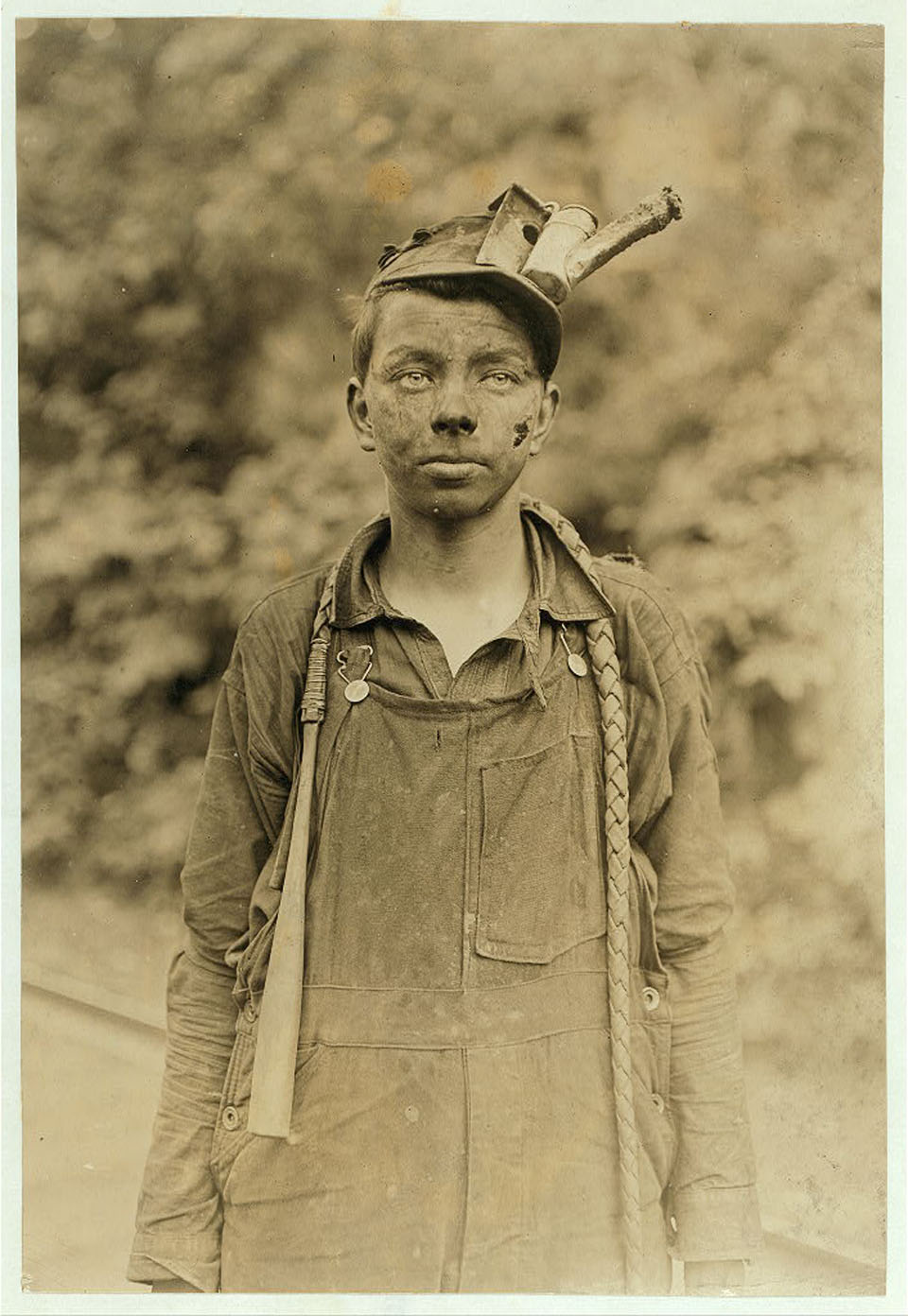 A young driver in Brown Mine in Brown, West Virginia. Hine said the boy had been driving one year, working from 7 a.m. to 5:30 p.m. daily. 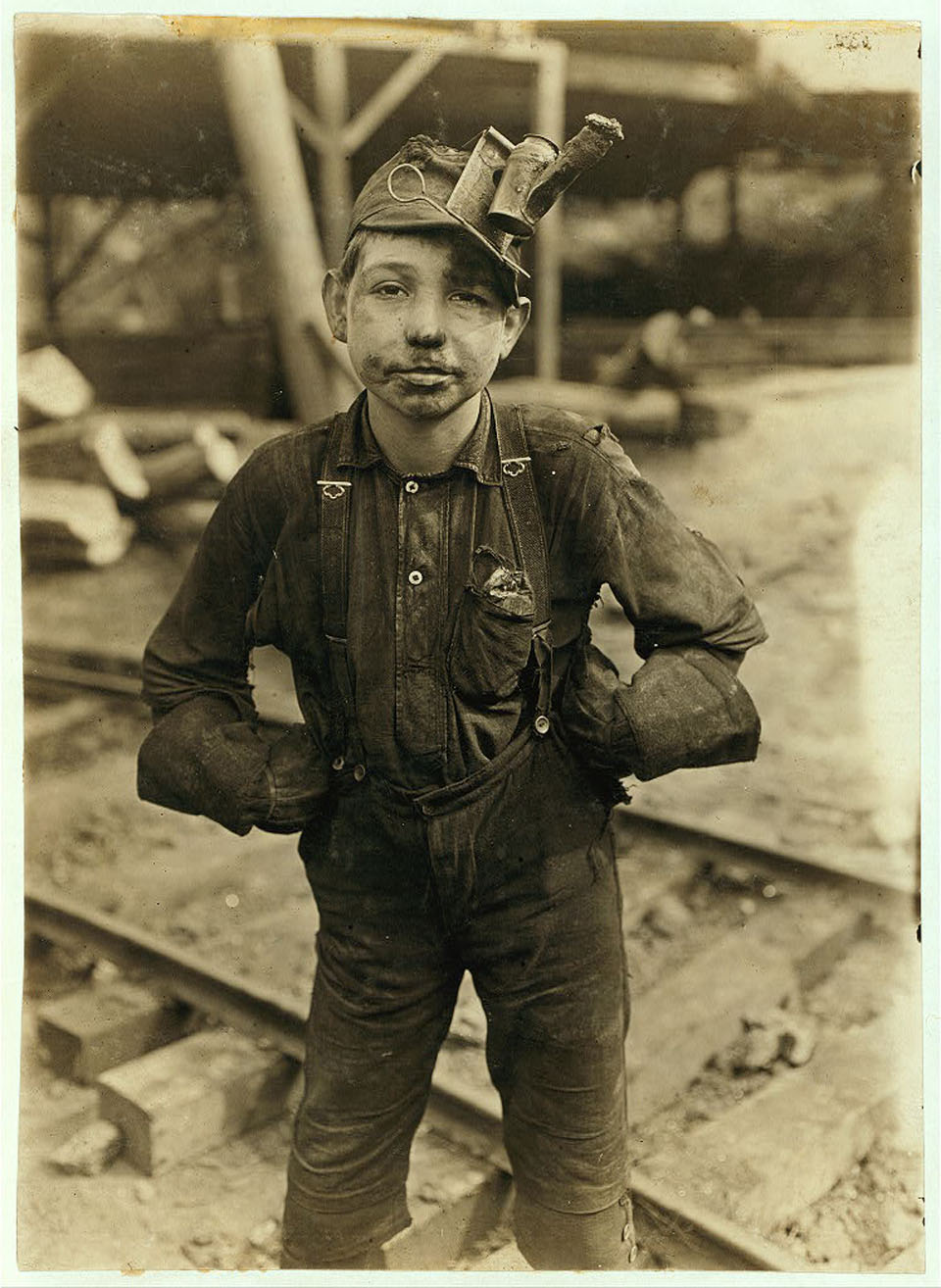 A tipple boy working at Turkey Knob Mine in MacDonald, West Virginia. 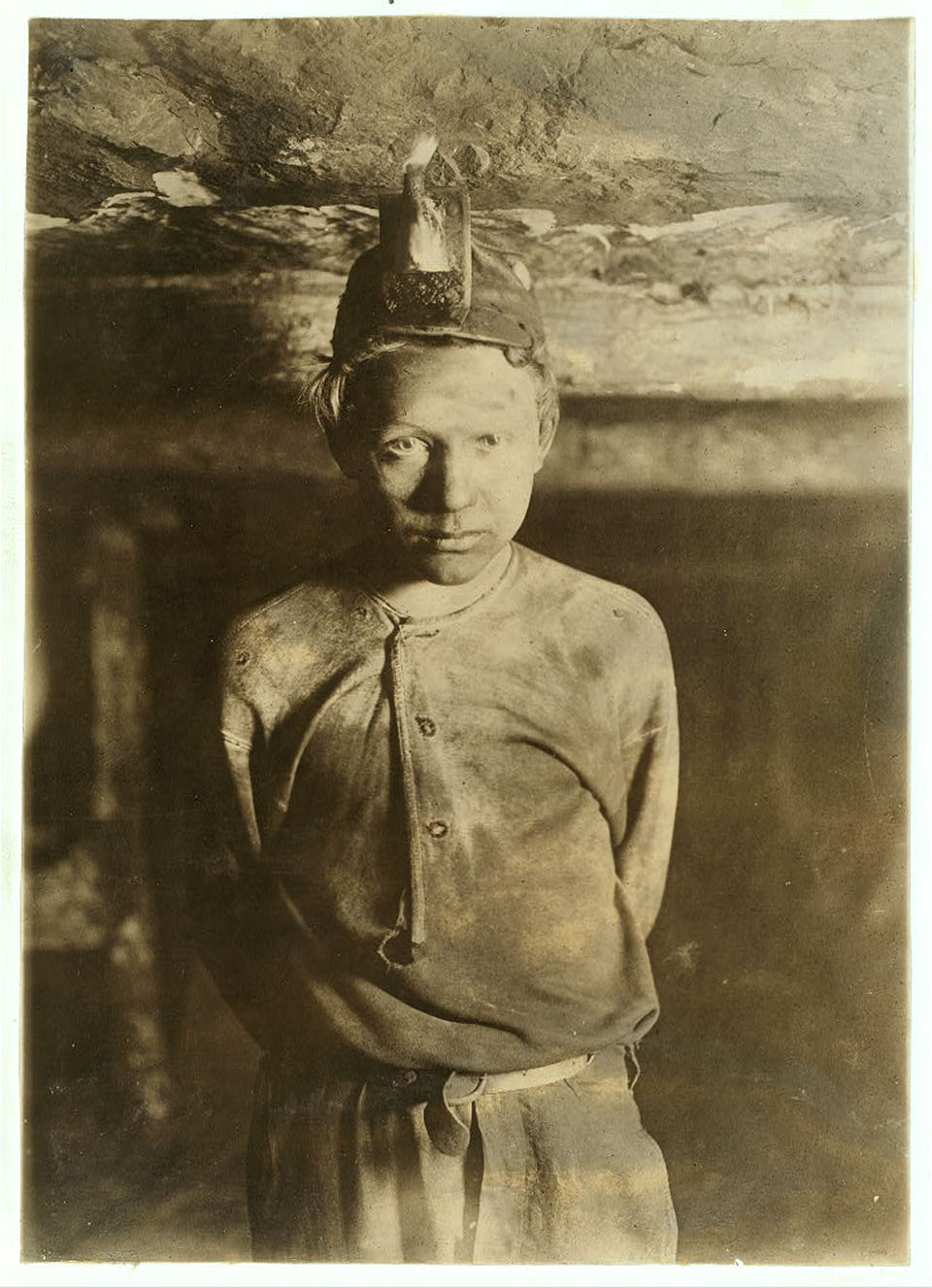 A trapper boy working in the Turkey Knob Mine in Macdonald, West Virginia. The boy had to stoop because of the low roof. This photo was taken more than a mile inside the mine. 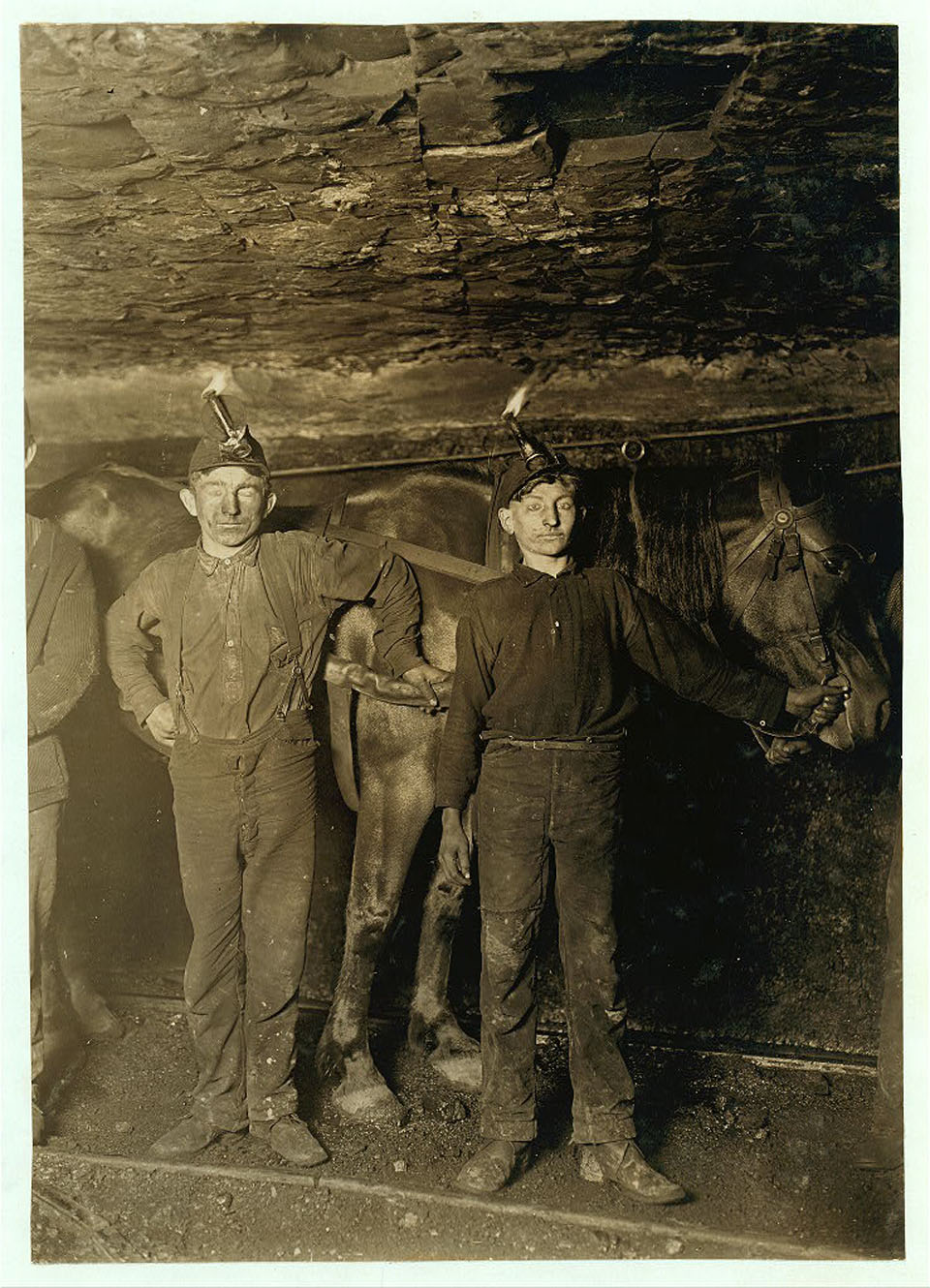 Drivers in a coal mine in West Virginia 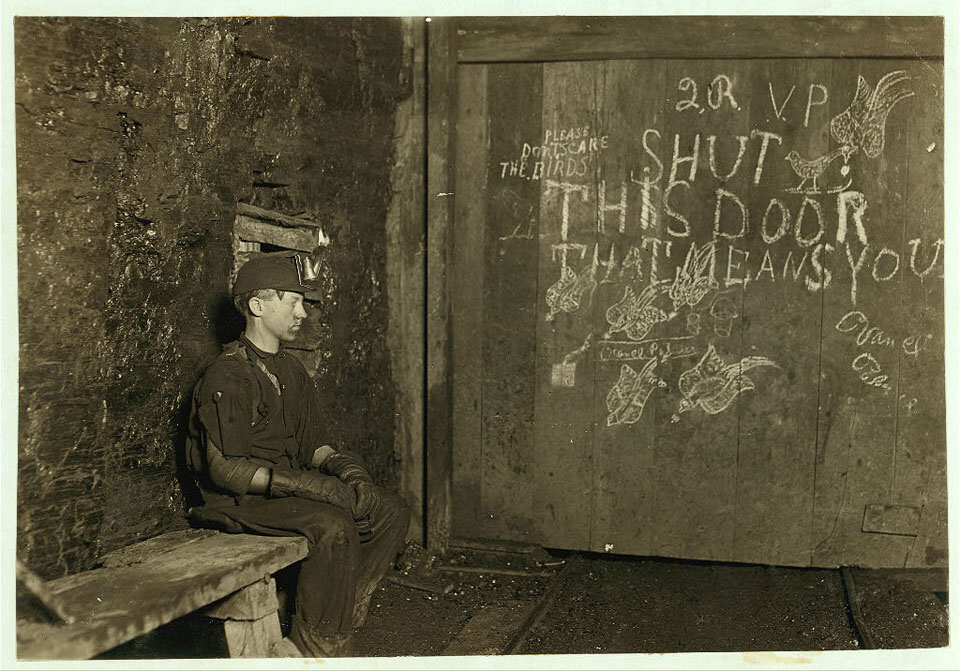 Vance, a trapper boy, was 15 years old when this photo was taken. He was paid 75 cents a day for 10 hours of work. His job was to open and shut this door. Because of the intense darkness in the mine, the writing on the door was not visible until plate was developed. 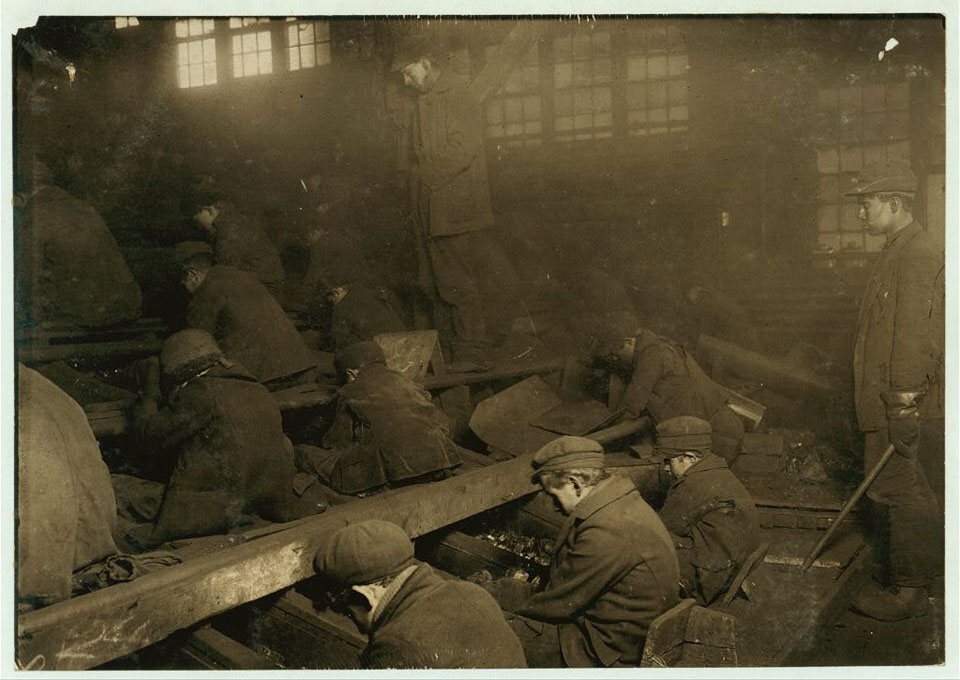 A view of Pennsylvania Coal Company’s Ewen Breaker in South Pittson, Pennsylvania. The dust was so dense at times, it was difficult to see, Hine wrote. A man sometimes stood over the boys, prodding or kicking them, the photographer wrote. 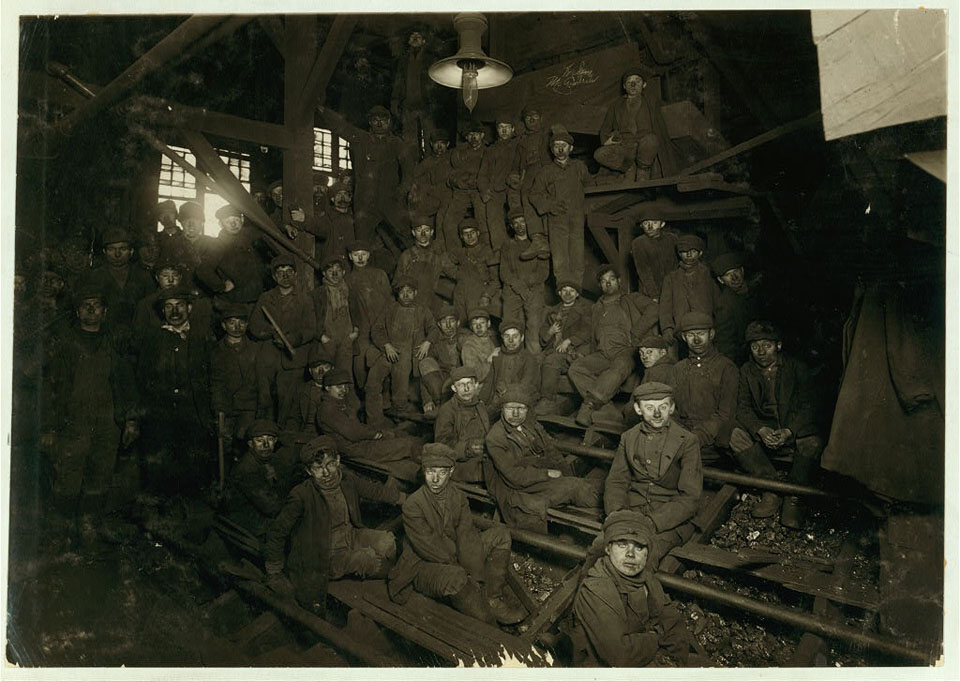 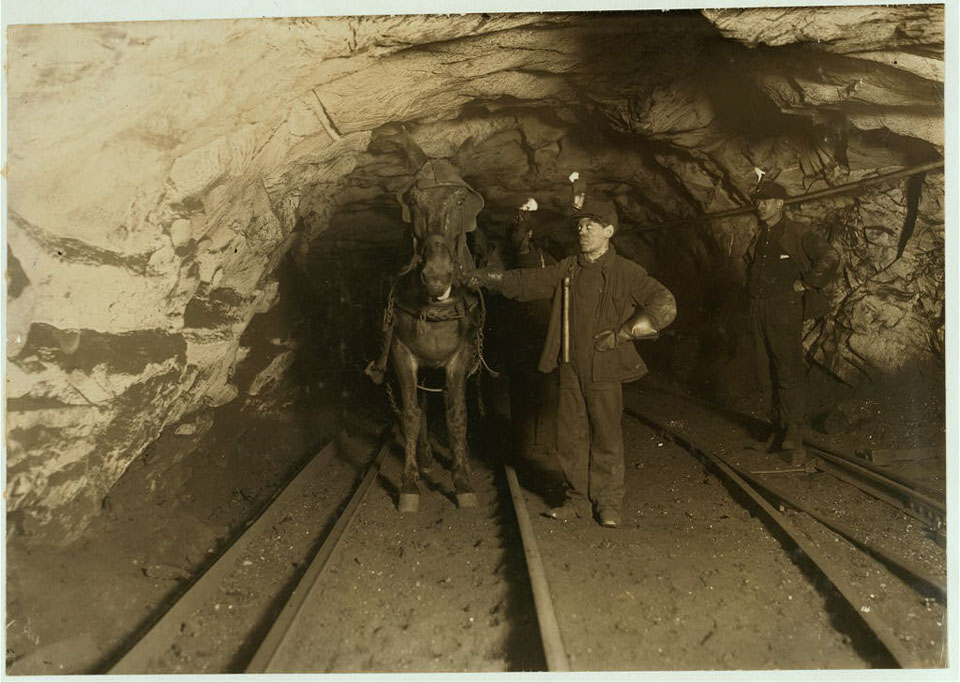 A young leader and a driver for the Pennsylvania Coal Company worked in Shaft #6 in South Pittson. The workers are Pasquale Salvo and Sandy Castina. 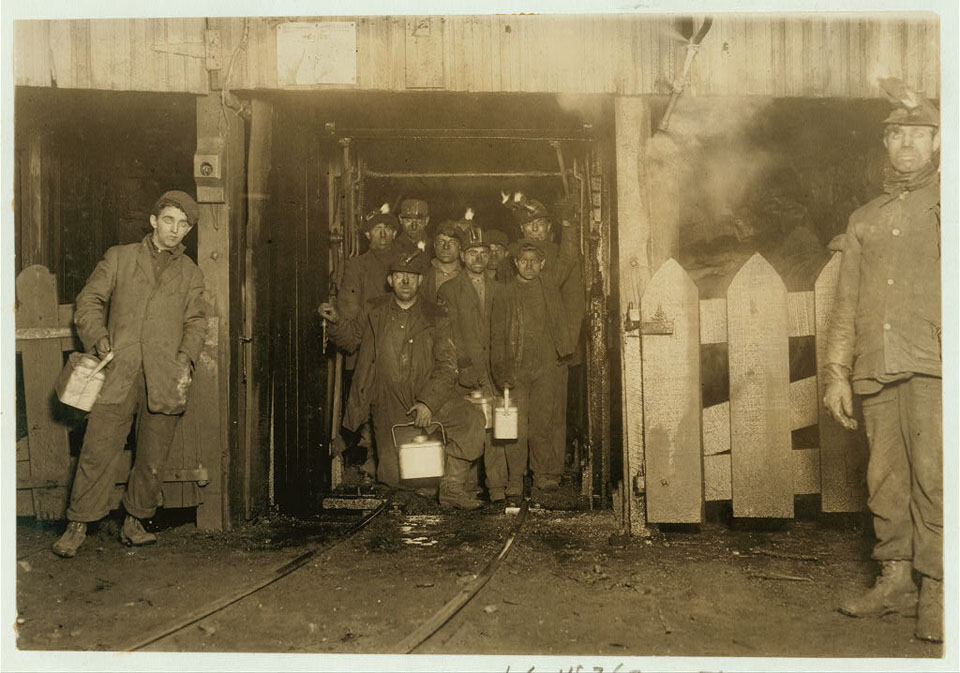 At the end of the day, workers for the Pennsylvania Coal Company waited for the cage to go up at Shaft #6 in South Pittson, Pennsylvania. The small boy in front is Jo Pume, a nipper. 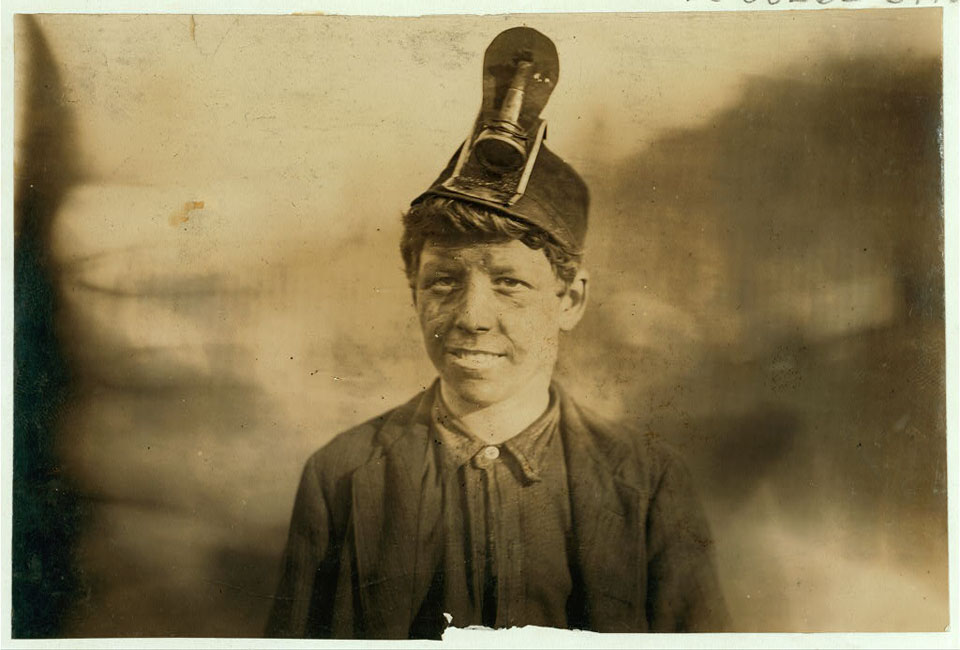 A photo of a miner boy named Frank as he was going home. At the time, he was about 14 years old. He had worked in the mine for three years helping his father pick and load. He was in the hospital one year, after his leg was crushed by a coal car, Hine wrote. 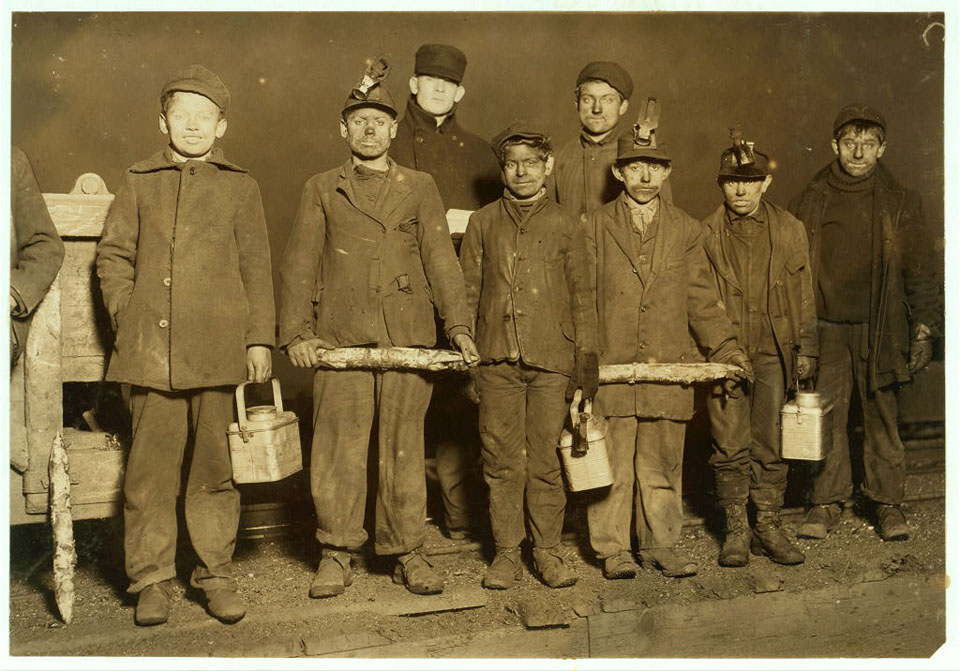 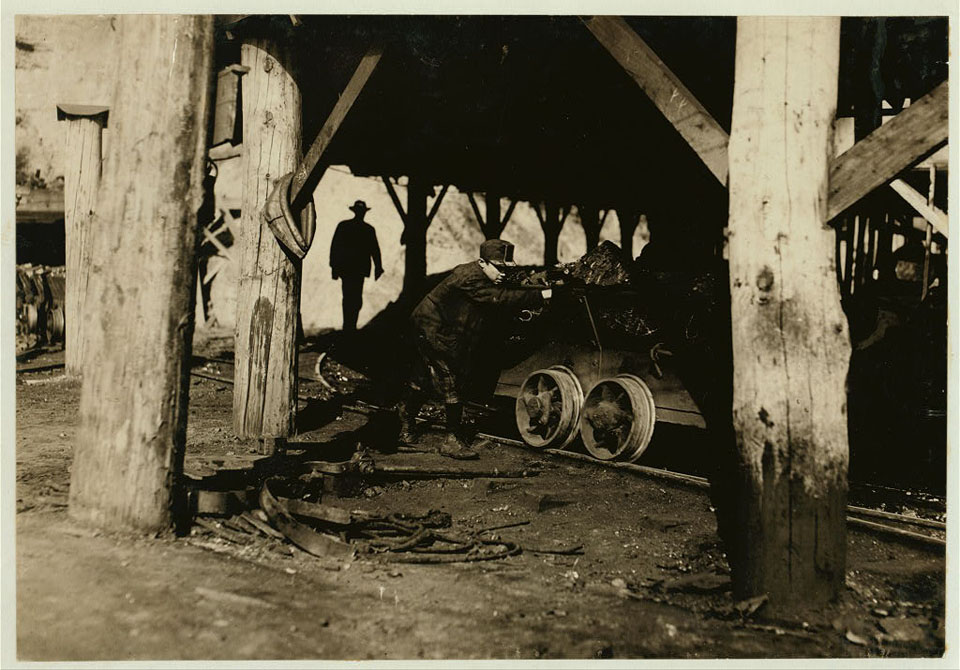 James O’Dell helped push these heavily loaded cars. He appears to be about 12 or 13 years old, Hine wrote. James worked at Knoxville Iron Co.’s Cross Mountain Mine, which is in the vicinity of Coal Creek, Tennessee. James had been there four months. 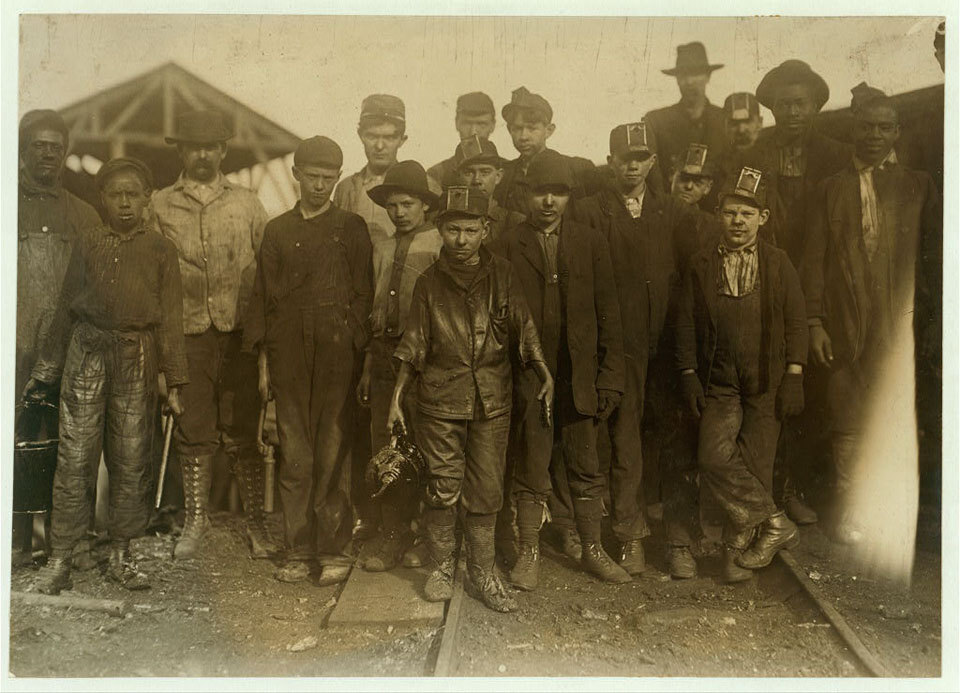 Shorpy Higginbotham was a greaser at Bessie Mine in Alabama, working for the Sloss-Sheffield Steel and Iron Company. Hine said the boy told him that he was 14 years old, but Hine suspected the boy wasn’t telling the truth. At work, Shorpy carried two heavy pails of grease and was often in danger of being run over by the coal cars. 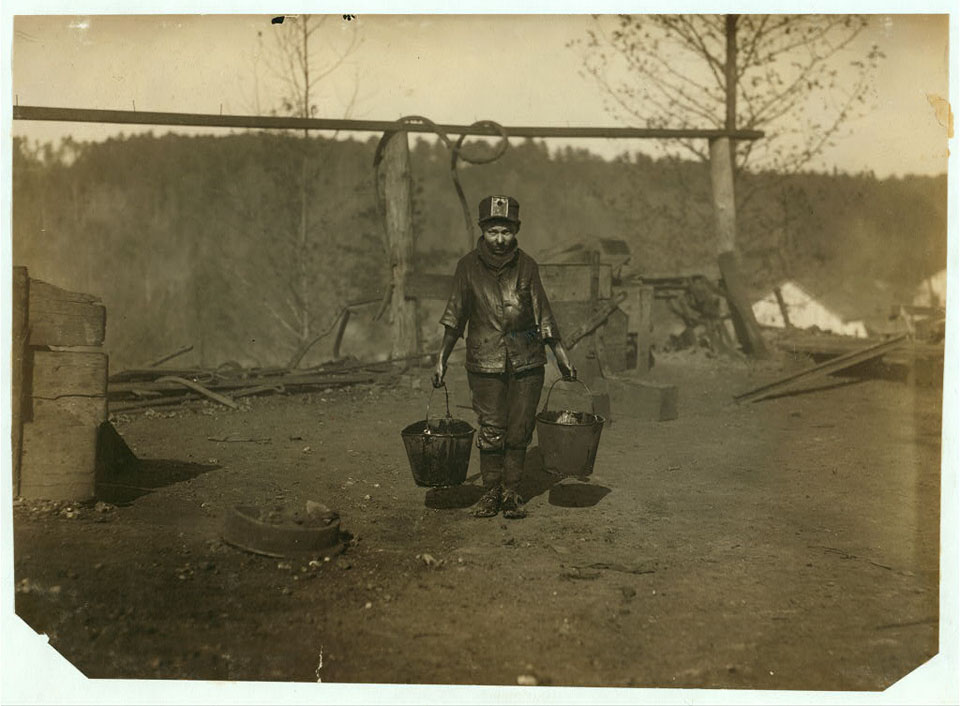 A greaser at Bessie Mine in Alabama 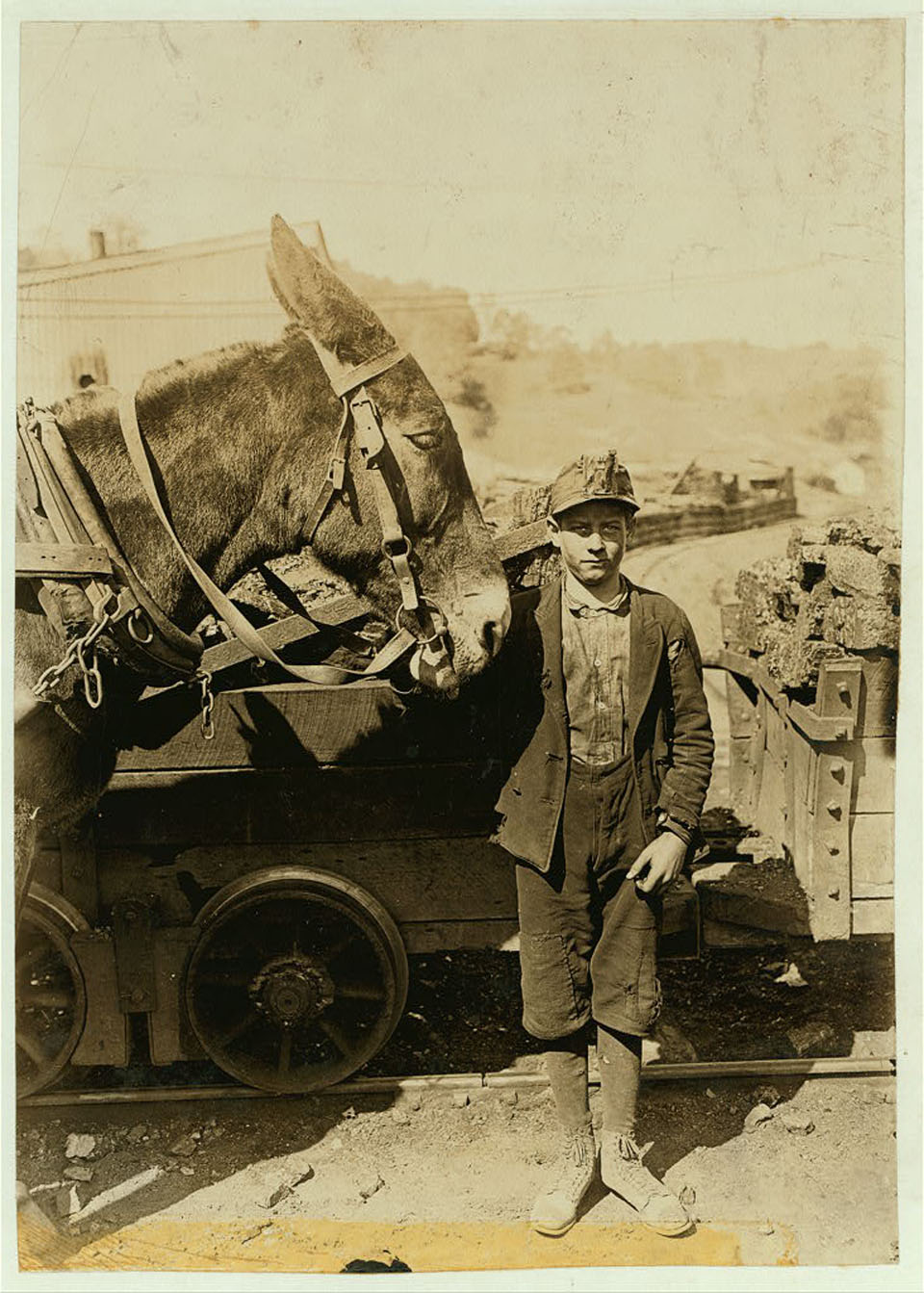 Harry and Sallie. Harry was a driver for the Maryland Coal Co. Mine, which was near Grafton, West Virginia. Hine said the boy was afraid of being photographed because he might be forced to go to school. Harry was probably 12 years old, Hine wrote. 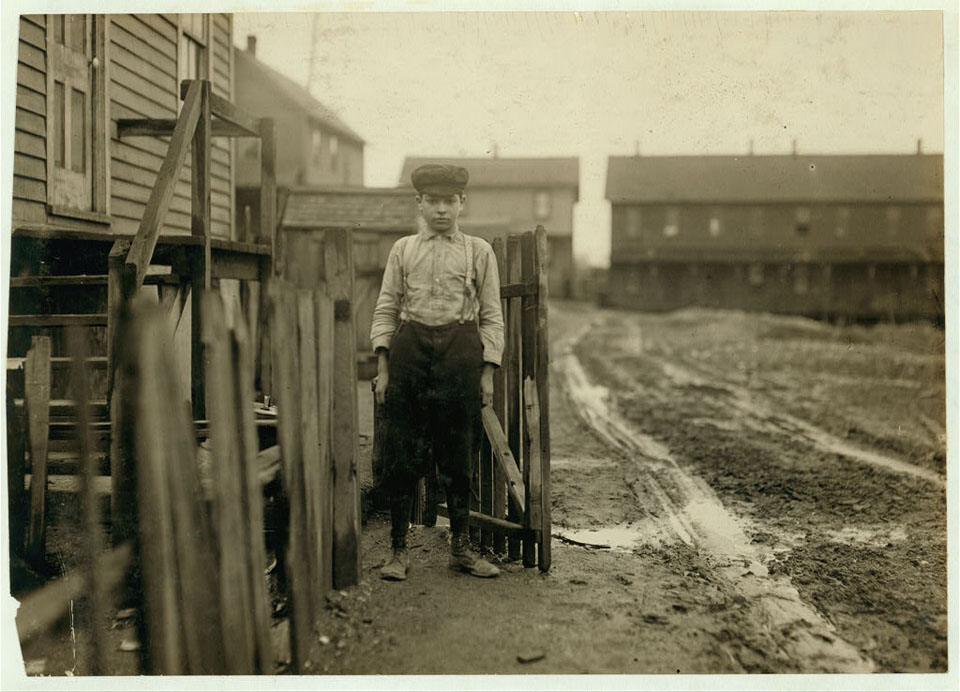