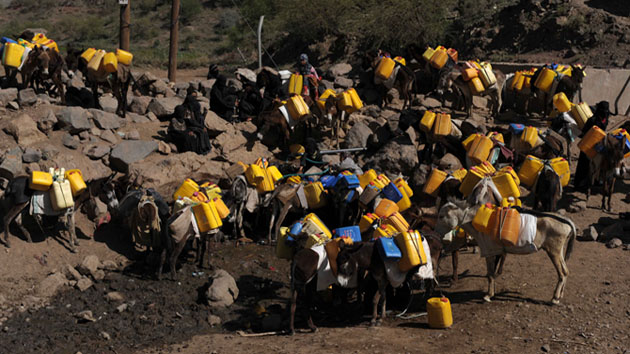 Villagers ride donkeys to get water in Yemen in 2012. Yemen is one of the most arid countries in the world and relies almost exclusively on groundwater and rainfall for its water supply. Mohammed Mohammed/Xinhua/ZUMA

This story was originally published by Reveal from the Center for Investigative Reporting and is reproduced here as part of the Climate Desk collaboration. Subscribe to the podcast and learn more at revealnews.org.

Secret conversations between American diplomats show how a growing water crisis in the Middle East destabilized the region, helping spark civil wars in Syria and Yemen, and how those water shortages are spreading to the United States.

Classified US cables reviewed by Reveal from the Center for Investigative Reporting show a mounting concern by global political and business leaders that water shortages could spark unrest across the world, with dire consequences.

Many of the cables read like diary entries from an apocalyptic sci-fi novel.

“Water shortages have led desperate people to take desperate measures with equally desperate consequences,” according to a 2009 cable sent by US Ambassador Stephen Seche in Yemen as water riots erupted across the country.

On September 22 of that year, Seche sent a stark message to the US State Department in Washington relaying the details of a conversation with Yemen’s minister of water, who “described Yemen’s water shortage as the ‘biggest threat to social stability in the near future.’ He noted that 70 percent of unofficial roadblocks stood up by angry citizens are due to water shortages, which are increasingly a cause of violent conflict.”

Seche soon cabled again, stating that 14 of the country’s 16 aquifers had run dry. At the time, Yemen wasn’t getting much news coverage, and there was little public mention that the country’s groundwater was running out.

These communications, along with similar cables sent from Syria, now seem eerily prescient, given the violent meltdowns in both countries that resulted in a flood of refugees to Europe.

Groundwater, which comes from deeply buried aquifers, supplies the bulk of freshwater in many regions, including Syria, Yemen, and drought-plagued California. It is essential for agricultural production, especially in arid regions with little rainwater. When wells run dry, farmers are forced to fallow fields, and some people get hungry, thirsty, and often very angry.

The classified diplomatic cables, made public years ago by WikiLeaks, now are providing fresh perspective on how water shortages have helped push Syria and Yemen into civil war, and prompted the king of neighboring Saudi Arabia to direct his country’s food companies to scour the globe for farmland. Since then, concerns about the world’s freshwater supplies have only accelerated.

It’s not just government officials who are worried. In 2009, US Embassy officers visited Nestlé’s headquarters in Switzerland, where company executives, who run the world’s largest food company and are dependent on freshwater to grow ingredients, provided a grim outlook of the coming years. An embassy official cabled Washington with the subject line, “Tour D’Horizon with Nestle: Forget the Global Financial Crisis, the World Is Running Out of Fresh Water.”

“Nestle thinks one-third of the world’s population will be affected by fresh water scarcity by 2025, with the situation only becoming more dire thereafter and potentially catastrophic by 2050,” according to a March 24, 2009, cable. “Problems will be severest in the Middle East, northern India, northern China, and the western United States.”

At the time of that meeting, government officials from Syria and Yemen already had started warning US officials that their countries were slipping into chaos as a result of water scarcity. 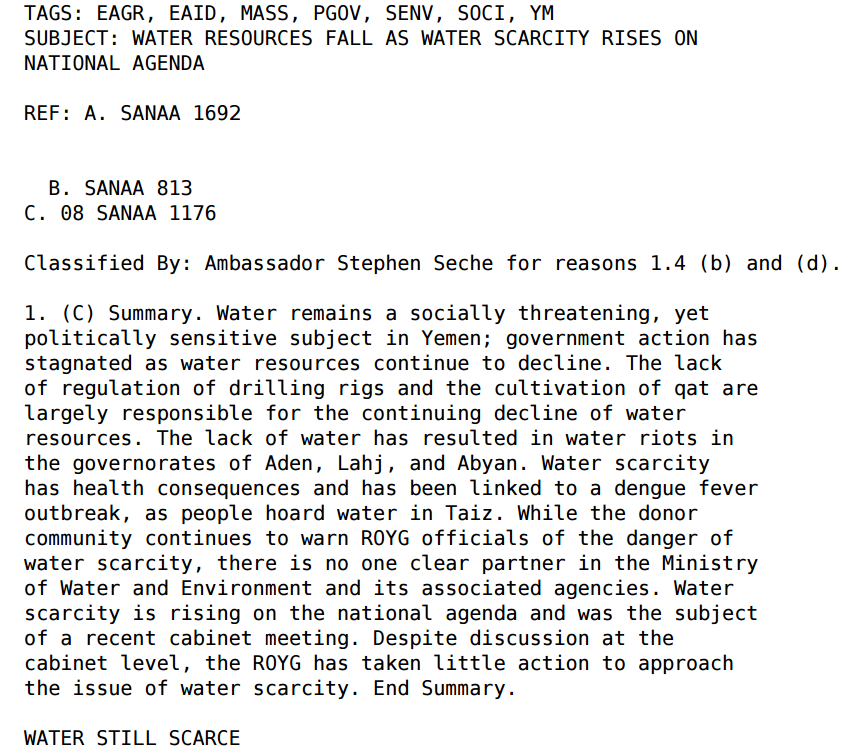 By September 2009, Yemen’s water minister told the US ambassador that the water riots in his country were a “sign of the future” and predicted “that conflict between urban and rural areas over water will lead to violence,” according to the cables.

Less than two years later, rural tribesmen fought their way into Yemen’s capital, Sanaa, and seized two buildings: the headquarters of the ruling General People’s Congress and the main offices of the water utility. The president was forced to resign, and a new government was formed. But water issues continued to amplify long-simmering tensions between various religious groups and tribesmen, which eventually led to a full-fledged civil war.

Reveal reviewed a cache of water-related documents that included Yemen, Nestlé, and Saudi Arabia among the diplomatic documents made public by WikiLeaks in 2010. Thomas Friedman, a columnist for the New York Times, found similar classified US cables sent from Syria. Those cables also describe how water scarcity destabilized the country and helped spark a war that has sent more than 1 million refugees fleeing into Europe, a connection Friedman has continued to report.

The water-fueled conflicts in the Middle East paint a dark picture of a future that many governments now worry could spread around the world as freshwater supplies become increasingly scarce. The CIA, the State Department, and similar agencies in other countries are monitoring the situation.

In the past, global grain shortages have led to rapidly increasing food prices, which analysts have attributed to sparking the Arab Spring revolution in several countries, and in 2008 pushed about 150 million people into poverty, according to the World Bank.

Water scarcity increasingly is driven by three major factors: Global warming is forecast to create more severe droughts around the world. Meat consumption, which requires significantly more water than a vegetarian or low-meat diet, is spiking as a growing middle class in countries such as China and India can afford to eat more pork, chicken, and beef. And the world’s population continues to grow, with an expected 2 billion more stomachs to feed by 2050.

The most troubling signs of the looming threat first appeared in the Middle East, where wells started running dry nearly 15 years ago. Having drained down their own water supplies, food companies from Saudi Arabia and elsewhere began searching overseas.

In Saudi Arabia, the push to scour the globe for water came from the top. King Abdullah decreed that grains such as wheat and hay would need to be imported to conserve what was left of the country’s groundwater. All wheat production in Saudi Arabia will cease this year, and other water-intensive crops such as hay are being phased out, too, the king ruled.

A classified US cable from Saudi Arabia in 2008 shows that King Abdullah directed Saudi food companies to search overseas for farmland with access to freshwater and promised to subsidize their operations. The head of the US Embassy in Riyadh concluded that the king’s goal was “maintaining political stability in the Kingdom.”

US intelligence sources are quick to caution that while water shortages played a significant factor in the dissolution of Syria and Yemen, the civil wars ultimately occurred as a result of weak governance, high unemployment, religious differences, and the wars in Iraq and Afghanistan, in addition to water shortages.

For instance, the state of California has endured a record drought without suffering an armed coup to overthrow Gov. Jerry Brown.

But for less stable governments, severe water shortages are increasingly expected to cause political instability, according to the US intelligence community.

In a 2014 speech, US Director of National Intelligence James Clapper said food and water scarcity are contributing to the “most diverse array of threats and challenges as I’ve seen in my 50-plus years in the intel business.

“As time goes on, we’ll be confronting issues I call ‘basics’ resources—food, water, energy, and disease—more and more as an intelligence community,” he said.

These problems are not just happening overseas, but already are leading to heated political issues in the United States. In the western part of the country, which Nestlé forecast will suffer severe long-term shortages, tensions are heating up as Middle Eastern companies arrive to tap dwindling water supplies in California and Arizona.

Almarai, which is Saudi Arabia’s largest dairy company and has publicly said it’s following the king’s directive, began pumping up billions of gallons of water in the Arizona desert in 2014 to grow hay that it exports back to the Middle East. Analysts refer to this as exporting “virtual water.” It is more cost effective to use the Arizona water to irrigate land in America and ship the hay to Saudi Arabia than it is to fill a fleet of oil tankers with the water.

“Water can be a very angry issue. With people’s wells drying up, it becomes very personal.”

Arizonans living near Almarai’s hay operation say their groundwater is dropping fast as the Saudis and other foreign companies increase production. They are now worried their domestic wells might suffer the same fate as those in Syria and Yemen.

In January, more than 300 people packed into a community center in rural La Paz County to listen to the head of the state’s water department discuss how long their desert aquifer would last.

“Water can be a very angry issue,” she said. “With people’s wells drying up, it becomes very personal.”

Thomas Buschatzke, Arizona’s water director, defended the Saudi farm, saying it provides jobs and increases tax revenue. He added that “Arizona is part of the global economy; our agricultural industry generates billions of dollars annually to our state’s economy.”

But state officials admit they don’t know how long the area’s water will last, given the increased water pumping, and announced plans to study it.

“It’s gotten very emotional,” Irwin said. “When you see them drilling all over the place, I need to protect the little people.” 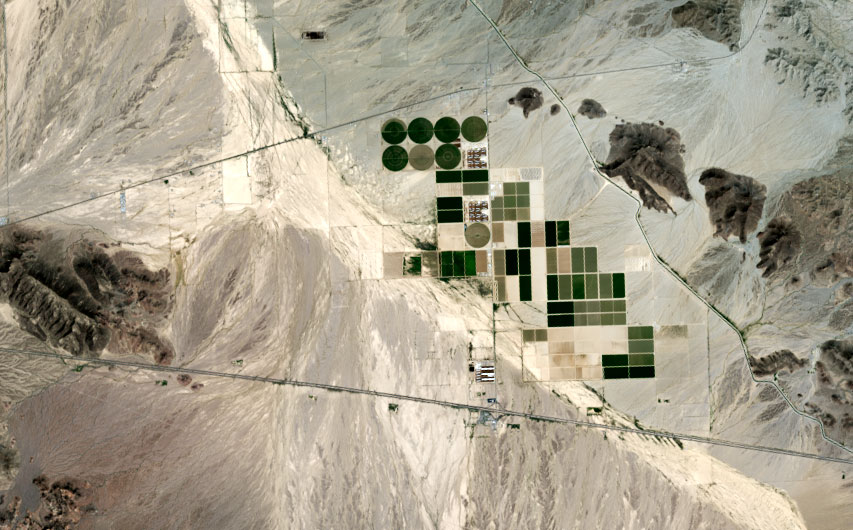 By buying land in America’s most productive ground for growing hay, which just happens to be a desert, Saudi Arabia’s largest dairy company now can grow food for its cows back home—all year long. US Geological Survey/NASA Landsat

After the meeting, the state approved another two new wells for the Saudi company, each capable of pumping more than 1 billion gallons of water a year.

Back in Yemen in 2009, US Ambassador Seche described how as aquifers were drained, and groundwater levels dropped lower, rich landowners drilled deeper and deeper wells. But everyday citizens did not have the money to dig deeper, and as their wells ran dry, they were forced to leave their land and livelihoods behind.

“The effects of water scarcity will leave the rich and powerful largely unaffected,” Seche wrote in the classified 2009 cable. “These examples illustrate how the rich always have a creative way of getting water, which not only is unavailable to the poor, but also cuts into the unreplenishable resources.”