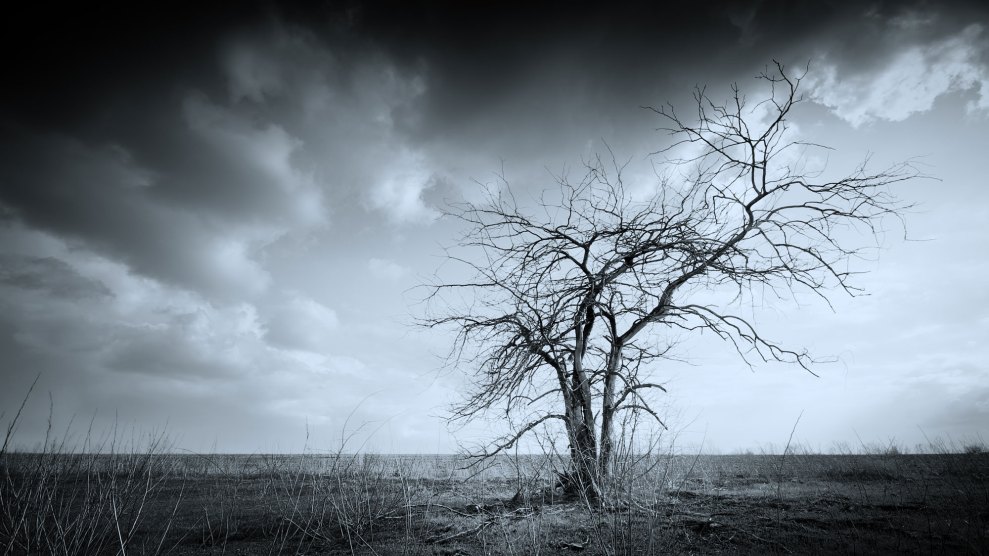 One out of every five plant species on Earth is now threatened with extinction. That’s the disturbing conclusion of a major report released this week by scientists at Britain’s Royal Botanic Gardens Kew. The planet’s vegetation—from grasslands to deserts to tropical rainforests—is being hit hard by human activity. And deforestation, pollution, agriculture, and climate change are all playing a role.

“My job is to leave some evidence for future generations that there was somebody who cared while we were destroying everything.”

The sliver of good news, though, is that some researchers are hopeful that people will be able to act in time to avert the worst of the impending crisis. “I am reasonably optimistic,” said Kathy Willis, Kew’s science director, in an interview with our partners at the Guardian. “Once you know [about a problem], you can do something about it. The biggest problem is not knowing.”

But others take a darker view. “Regardless of what humans do to the climate, there will still be a rock orbiting the sun,” said University of Hawaii scientist Hope Jahren in a recent interview with Indre Viskotas on the Inquiring Minds podcast. Jahren is a geobiologist—she studies how the earth (“geo”) and life (“bio”) come together to shape our world. “I’m interested in how the parts of the planet that aren’t alive—rocks and rivers and rain and clouds—turn into the…parts of the world that are alive: leaves and moss and the things that eat those things,” she explains. And what she’s seeing isn’t good. “We are already seeing extinctions,” she says. “We’re already seeing the balance of who can thrive and who can’t thrive in…the plant world radically shifted. In a lot of ways, I think that train has passed.” You can listen to her full interview below:

Jahren, who is the author of a new book called Lab Girl, was recently included on Time magazine’s list of the 100 most influential people. She’s also an outspoken voice for gender equality and the fight against sexual harassment and assault in the scientific community.

Part of Jahren’s work has focused on reconstructing the climate of the Eocene, the geologic epoch that lasted from about 56 million years ago to about 34 million years ago. In the middle of that period, about 45 million years ago, the world was so warm that massive deciduous forests were growing above the Arctic Circle—despite the fact that, as Jahren points out, the region saw little-to-no sunshine for part of the year. Jahren and her colleagues study fossilized plant tissues left over from these ancient forests in order to understand how the climatic factors of the time—light levels, atmospheric composition, water, etc.—combined to “make possible this life in the darkness.” She compares her work to investigating a crime scene. “Almost anything you come upon could have information in it,” she says.

Jahren’s description of a lush Arctic full of plants and animals is striking. Imagining that world, she says, is “a really neat thing to do when you’re…juxtaposing that image against that fact that you’re near the North Pole, and there’s not a soul in sight for thousands of miles, and there’s not a green thing in sight for hundreds of miles.” That may be one of the reasons why she speaks so passionately about environmental destruction in the present day. “The world breaks a little bit every time we cut down a tree,” she says. “It’s so much easier to cut one down than to grow one. And so it’s worth interrogating every time we do it.”

In the end, though, Jahren isn’t sure that science will lead humanity to make better decisions about the planet. Instead, she says, “I think my job is to leave some evidence for future generations that there was somebody who cared while we were destroying everything.”