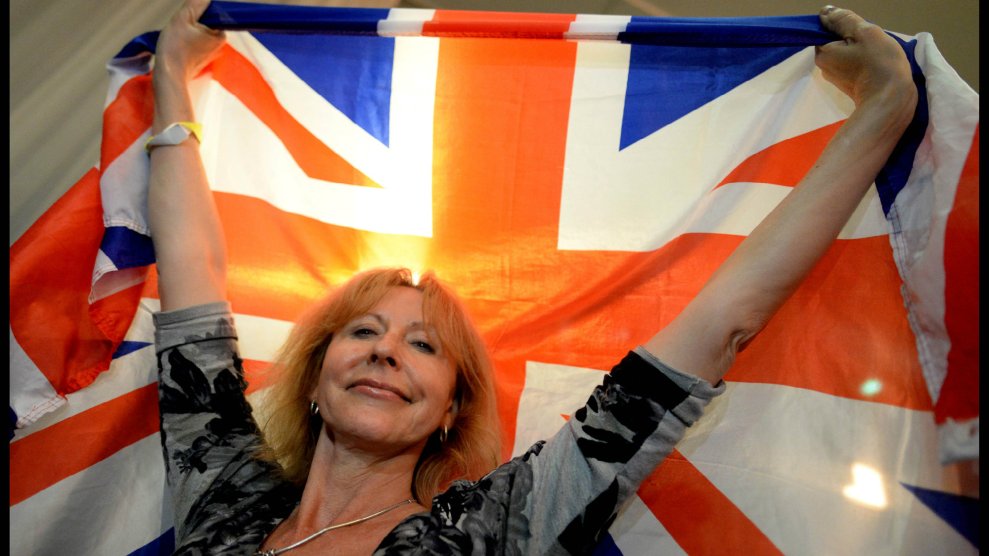 A "Leave" supporter celebrates as the United Kingdom votes to withdraw from the European Union.Andrew Parsons/i-Images via ZUMA Wire

Despite being an issue that knows no borders, affects all, and is of vital interest to future generations, the environment was low on the agenda ahead of the United Kingdom’s historic vote to leave the European Union.

The short answer to what happens next with pollution, wildlife, farming, green energy, climate change and more is we don’t know—we are in uncharted territory. But all the indications—from the “red-tape” slashing desires of the Brexiters to the judgment of environmental professionals—are that the protections for our environment will get weaker.

The crashing financial markets will damage the huge investments needed to create a cleaner and safer environment and will dent the nation’s fast-growing green economy.

There is one immediate impact though, right here, right now: The crashing financial markets will damage the huge investments needed to create a cleaner and safer environment and will dent the nation’s fast-growing green economy, one economic sector where the UK could lead.

From the air we breathe to the food we eat to the climate we live in, how we protect and enhance the environment underpins the healthy and happy lives we all aspire to, now and for generations to come.

The 75 percent of 18-24-year-old Britons who voted to remain in the EU must be feeling betrayed by older generations today. Why? Because the UK’s membership of the EU has been a virtually unalloyed good for the environment.

The Brexit vote leaves it highly uncertain which protections will remain in place and the prospect of improving them seems remote. UKIP’s Nigel Farage, the politician who did more than anyone to force the EU referendum, doesn’t even think climate change is a problem and wants to scrap pollution limits on power stations.

With 400,000 early deaths a year from air pollution—40,000 in the UK—the EU saw things differently and set new legal limits in 2010. Many UK cities and towns remain above those limits today and campaigners have used EU rules to successfully sue the UK government. But UK ministers are even now fighting new EU rules to reduce early deaths. Pollution does not stop in its tracks at national borders, and 88 percent of environment professionals in the UK think an EU-wide policy is needed.

Earlier legal action from the EU forced the UK to clean up its sewage-strewn beaches, while many of the protections for nature and wildlife across the nation stem from EU rules. Here again, the people whose job it is to safeguard these wonderful places and reverse the damage of the past think leaving the EU is a mistake: 66 percent say there will be a lower level of legal protection for wildlife and habitats against 30 percent who think it will improve.

The EU has also driven a revolution in recycling and waste. What will happen to that, according to the people who made it happen on the ground? Two-thirds of the professionals think it will go into reverse, with 30 percent saying it will stay the same and just 4 percent thinking it will improve.

One major EU policy—its vast subsidy regime for farmers—has not been good for wildlife by encouraging damaging intensive agriculture: There are 421 million fewer birds in Europe than 30 years ago. But the Common Agricultural Policy was improving its approach to the environment and supports the farmers who put food on our tables every day. They are now in an agonizing limbo. Fishermen may hope to get larger quotas now the UK is leaving the EU but for how long? There will not, without strong protections, be plenty more fish in the sea for long.

The UK’s membership of the EU has been a virtually unalloyed good for the environment.

The National Farmers Union (NFU) may get one wish from Brexit: the scrapping of a ban on pesticides that harm bees and other crucial pollinators. The NFU and UK ministers fought the ban, but the collective will of the EU saw it put in place.

The collective will of the EU has also been vital in climate change, both on the international stage and at home in the UK. The UK’s targets for renewable energy were agreed in Brussels but leaving the EU puts them into limbo too.

However, despite the current government hacking back support for clean energy, the UK does have strong domestic legislation which sets deep cuts in carbon emissions into law. But Boris Johnson, now a leading contender to be the UK’s next prime minister, is a climate change skeptic: Will he act on his conviction that all this global warming malarkey is piffle?

James Thornton, the chief executive of Client Earth, the lawyers who forced the government to improve its air pollution plans, said Brexit “leaves me shocked, disappointed and extremely concerned about the future of environmental protections in the UK.” Craig Bennett, head of Friends of the Earth, said the leave vote was a “red alert” for the environment.

Farage’s reaction to Brexit was unsurprisingly different: “I couldn’t be more delighted.”