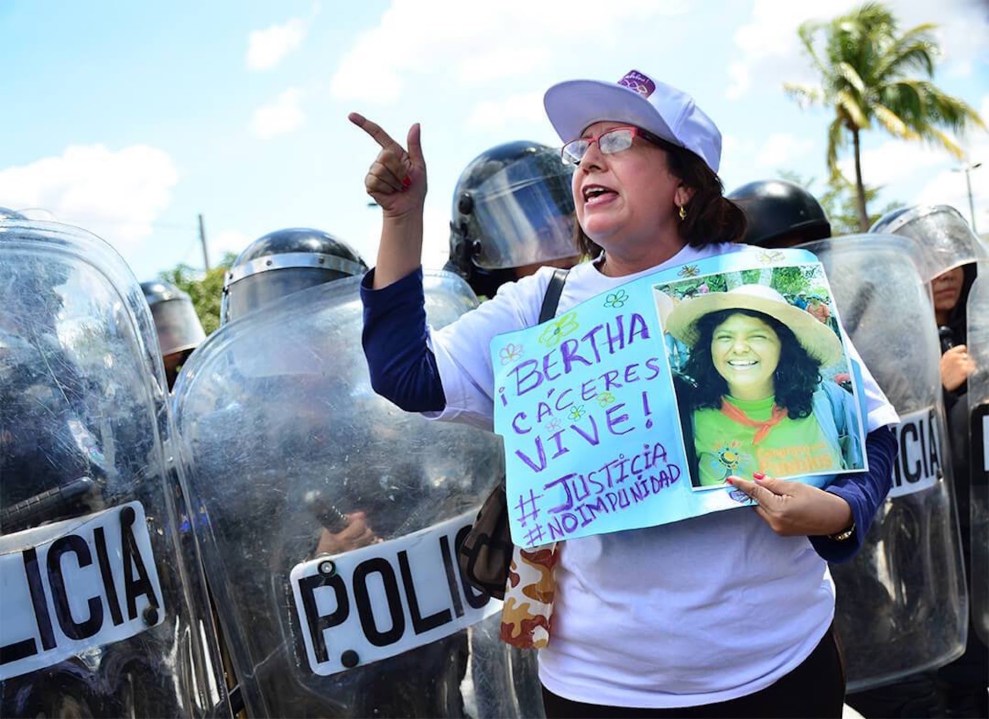 Demonstrators protest the murder of indigenous Honduran activist Berta Cáceres in March. Her death follows a year in which more environmentalists were killed than ever before.<a href="https://i.ytimg.com/vi/PA9TCgFRQ84/maxresdefault.jpg">Confidencial</a>/YouTube

Environmentalism has never been more dangerous. According to findings published Monday by the NGO Global Witness, 2015 marked the bloodiest year on record for environmental activists and land defenders. At least 185 environmentalists in 16 different countries are known to have been murdered, according to the group—a rate of more than three a week.

The figure represents a 60 percent increase over 2014’s death toll. And those are just the murders we know about. Global Witness says that number may actually be a significant underestimate. The true number could be “far higher,” since many such killings happen deep within rainforests or in remote villages and are difficult to document.

Latin America and Southeast Asia suffered the brunt of the slayings, with Brazil (50), the Philippines (33), and Colombia (26) sustaining the greatest losses.

Nearly 40 percent of those killed came from indigenous communities, according to the report. Groups that attempt to resist development and land expropriation in resource-rich areas are particularly vulnerable. In the Mindanao region of the Philippines, a largely indigenous region flush with coal, nickel, and gold, 25 activists were murdered in 2015. The violence carries global implications—according to the IBON Foundation, foreign industries control 97 percent of all mineral production in the Philippines.

Perhaps unsurprisingly, few of these murders are ever prosecuted in court, or even investigated. According to the report, “Many authorities either turn a blind eye or actively impede investigations into these killings due to the collusion between corporate and state interests—the principal suspects in these murders.” Based on available data, Global Witness determined that killings were almost equally likely to occur at the hands of paramilitary, army, police, and private security. Felipe Milanez, former deputy editor of National Geographic Brazil, told the Guardian that “killing has become politically acceptable to achieve economic goals” and that he had “never seen, working for the past 10 years in the Amazon, a situation so bad.”

Slumping global commodities indices may give one partial explanation. The report cites economist Ademar Ramos of the State University of Campinas in Brazil, who argues that plummeting commodity prices and access to cheap oil have actually led to companies expanding their extractive practices and taking on greater risks in order to recoup lost profits. Coupled with an eroding regulatory climate in places such as Peru and Brazil, business interests have run roughshod over preexisting land tenure practices and in some case have targeted dissenters.

Mining, agribusiness, logging, and water rights were the four industrial sectors mostly explicitly implicated in this wave of violence. Mining—for tin, coal, copper, silver, and gold—was linked to 42 murders. Agribusiness was linked to 20 known murders. Expanded logging activity was linked to 15 killings. And hydroelectric dam initiatives in Central America were linked to another 15—not including the high-profile assassination of indigenous Honduran activist Berta Cáceres, a Goldman Environmental Prize winner and dam opponent who was shot in her home in March 2016.