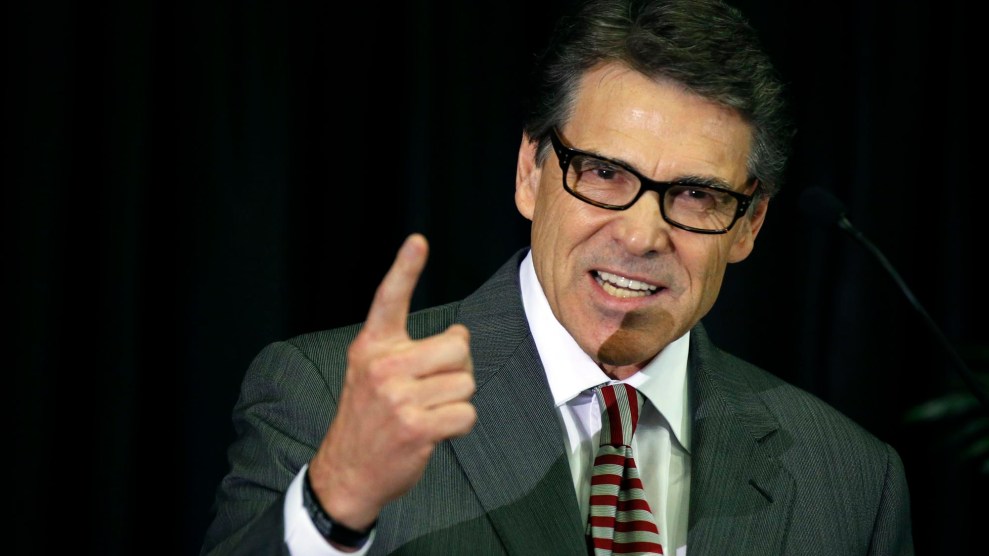 Multiple news sources reported Tuesday that former Texas Gov. Rick Perry will be Donald Trump’s nominee to head the Department of Energy. Many outlets have commented on the irony of picking as energy secretary a politician who had previously called for the department to be eliminated (and, for one infamous moment, forgot that it existed), as well as the wisdom of hiring someone whose most recent job experience was a brief stint on Dancing With the Stars.

But it’s Perry’s record on climate change that most distinguishes him from the energy secretaries who came before him. Unlike every energy chief in both the George W. Bush and Barack Obama administrations, Perry disputes that climate change is both happening and is a consequence of human action. In his 2010 book, Fed Up!, he wrote that “we have been experiencing a cooling trend” and railed against Democrats who have embraced “so-called science” on climate change. He complained the Department of Defense had devoted three whole pages to the subject in an official threat-assessment report. He kept up his climate change denial during his ill-fated 2012 presidential campaign. “There are a substantial number of scientists who have manipulated data so that they will have dollars rolling into their projects,” he alleged during one campaign appearance.

As governor, Perry walked the walk. In 2011, my colleague Kate Sheppard (now with the Huffington Post) reported that Perry officials at the Texas Commission on Environmental Quality had censored references to climate change in an official state report:

Top environmental officials under Perry have gutted a recent report on sea level rise in Galveston Bay, removing all mentions of climate change. For the past decade, the Texas Commission on Environmental Quality (TCEQ), which is run by Perry political appointees, including famed global warming denier Bryan Shaw, has contracted with the Houston Advanced Research Center to produce regular reports on the state of the Bay. But when HARC submitted its most recent State of the Bay publication to the commission earlier this year, officials decided they couldn’t accept a report that said climate change is caused by human activity and is causing the sea level to rise. Top officials at the commission proceeded to edit the paper to censor its references to human-induced climate change or future projections on how much the bay will rise.

The TCEQ is the state’s version of the Environmental Protection Agency—which won’t be under Perry’s purview in Washington. But the Department of Energy has been at the forefront of President Barack Obama’s climate policy and—often working with the EPA—has pumped billions of dollars into clean-energy research and development. The Trump administration has already signaled its willingness to strip the department of this climate focus. Last week, the president-elect’s transition team asked the department to compile a list of every bureaucrat who had worked on climate policy at the agency; the plan was not, presumably, to give them raises. (The Energy Department rebuffed that request on Tuesday.)