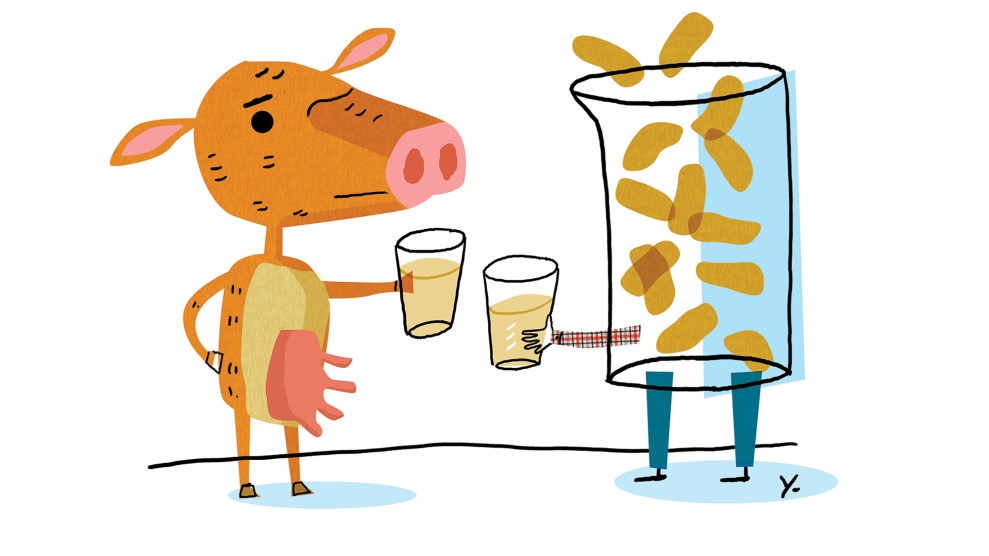 We seem to have come full circle on milk. First people began spurning cow’s milk in favor of soy, which they then swapped for almond or rice. Soon, baristas began touting hemp and coconut instead—nondairy milk sales have soared 30 percent since 2011. But the next trend for the beverage isn’t a plant-based alternative: It’s cow’s milk—with a twist. Though nearly identical to the stuff you grew up drinking, this milk is produced not by bovines, but by yeasts—single-celled fungi. And if Perfect Day, a Bay Area-based synthetic-biology startup, has its way, you might be able to buy yeast-produced milk this year.

Humans have been using yeast in their cooking for at least 9,000 years. Chemical analyses of pottery shards from China reveal that early Asians prepared a yeast-fermented beverage of rice, honey, and fruit. People around the world began to make beer and bread using a similar process, but it wasn’t until the 1970s that we learned how to manipulate yeasts’ genetic codes, tricking the fungi into secreting certain proteins. Now a multibillion-dollar market, GM yeasts have given us important medical commodities such as insulin, hepatitis vaccines, and cancer-fighting drugs.

Along with Perfect Day’s milk, we will soon have egg proteins and animal-free gelatin made from yeast.

But it’s only in the last few years that companies have used genetically modified yeasts to “brew” food ingredients. Much of the world’s cheese is now made using rennet that’s produced by synthetic yeast and bacteria to clot and curdle dairy. Yeast-made vanillin—the compound responsible for vanilla flavor—has been on the market since 2014. Along with Perfect Day’s milk, we will soon have egg proteins and animal-free gelatin made from yeast. Saffron (the world’s most expensive spice) is likely to follow.

Concocting such high-tech foods isn’t cheap: When it debuts, Perfect Day’s milk is projected to cost twice as much as milk from a cow. But the price of sequencing DNA “is now falling faster than the cost of computing,” says Ron Shigeta, the chief science officer at IndieBio, a startup accelerator for synthetic biology. Shigeta estimates that eight years ago, it took about $1,200 to create a new strain of yeast; these days it’s down to $200 to $300.

To make its animal-free milk, Perfect Day uses 3D-printed DNA sequences for the six most common cow’s milk proteins and inserts them into yeast cells. Fed with corn sugar, the yeast begins emitting those proteins, which are separated out and used as ingredients in the milk. Perfect Day’s beverage contains 98 percent of the proteins found in cow’s milk, including casein, which is key to cheese production. But it lacks immunoglobulins, which can offer protection against E. coli and Helicobacter pylori bacteria, the cause of stomach infections and ulcers.

Perfect Day also has to add fats (like sunflower oil), carbohydrates, minerals, and vitamins to its drink. As for sugars, which occur naturally in milk, the company has an alternative to lactose, the root of many dairy allergies, but it won’t say what it is.

The company is happy to boast about the potential for yeast milk to take a load off the environment. Dairy production is responsible for almost 3 percent of the greenhouse gas emissions caused by humans every year—more than airplanes. It takes 1,093 gallons of water and up to 27 acres of land to create one gallon of cow’s milk. According to a study commissioned by Perfect Day, switching from conventional dairy production to its yeast milk could mean a 98 percent reduction in water consumption and up to 65 percent fewer greenhouse gas emissions.

Driven by Asia’s growing appetite for dairy, global demand for milk “appears to be outstripping supply.”

But yeast-made milk has a built-in PR problem. Some consumers could be turned off by the words “lab-made” or “genetically modified.” Technically, the product itself won’t be GM, since the engineered yeasts won’t end up in the milk, but that hasn’t stopped critics from denouncing Perfect Day’s process; the international environmental organization Friends of the Earth calls it “an extreme form of genetic engineering.” And you can expect the US dairy industry, which already spends $7 million a year lobbying, to jealously guard its $34 billion in annual sales and substantial government subsidies.

That said, driven by Asia’s growing appetite for dairy, global demand for milk “appears to be outstripping supply,” notes an article by analysts at multinational financial company Rabobank, which concludes that “cows cannot be coerced” to produce more. We might be better off coaxing yeast to work for us instead.