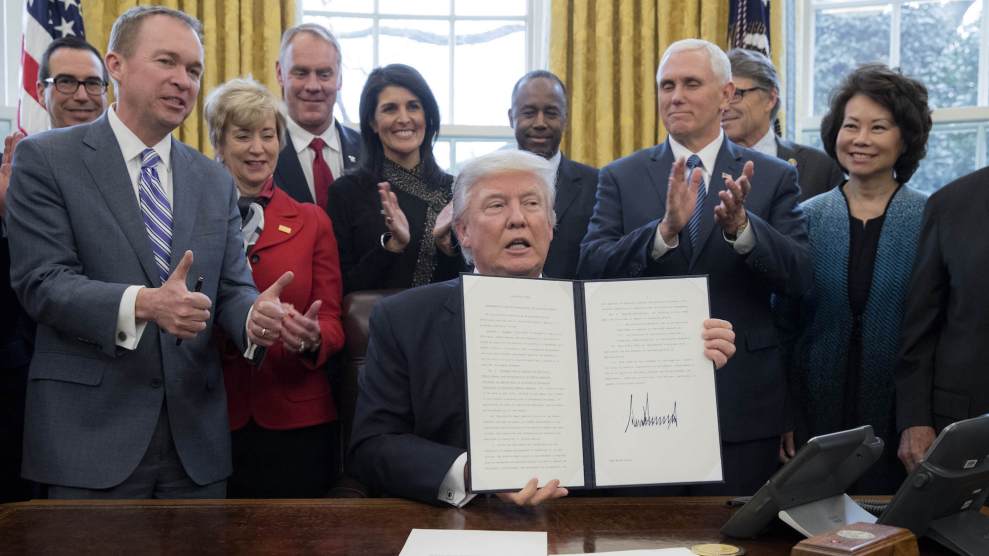 President Donald Trump’s budget fulfills his warnings on the campaign trail to eliminate most, if not all, of government funding on climate change programs. The White House budget released Thursday hacks the Environmental Protection Agency’s budget by 31 percent, and budgets for climate change programs across the State Department, NOAA, NASA, and the Interior Department are also slashed.

“I think the president was fairly straightforward on that: We’re not spending money on that anymore,” White House Budget Director Mick Mulvaney said flatly during a press briefing Thursday afternoon. “We consider that to be a waste of your money.”

Among the programs facing cuts are Obama-era power plant regulations, international climate programs, scientific research, and more, which amounts to more than $100 million from the budget, according to the White House. That $100 million will help fund a $54 billion bump for the military.

Fortunately, budgetary matters are not entirely up to Trump—Congress has to pass appropriations bills. While many in the Republican Congress will approve of such radical cuts, there are still enough Democrats in the Senate, and even some Republicans, who disagree with Trump and whose votes are necessary for the 60 required to approve the budget.

There’s another complication: Thanks to the landmark 2007 Supreme Court decision, Massachusetts vs. EPA, the EPA is obligated by law to come up with a way to regulate greenhouse gasses from vehicles, power plants, and other sources. The decision stated: “Under the Act’s clear terms, EPA can avoid promulgating regulations only if it determines that greenhouse gases do not contribute to climate change or if it provides some reasonable explanation as to why it cannot or will not exercise its discretion to determine whether they do.”

The White House’s argument that it’s “a waste of your money” might not rise to the level of a “reasonable explanation.” Trump’s Secretary of Defense James Mattis, however, does think climate change warrants concern.