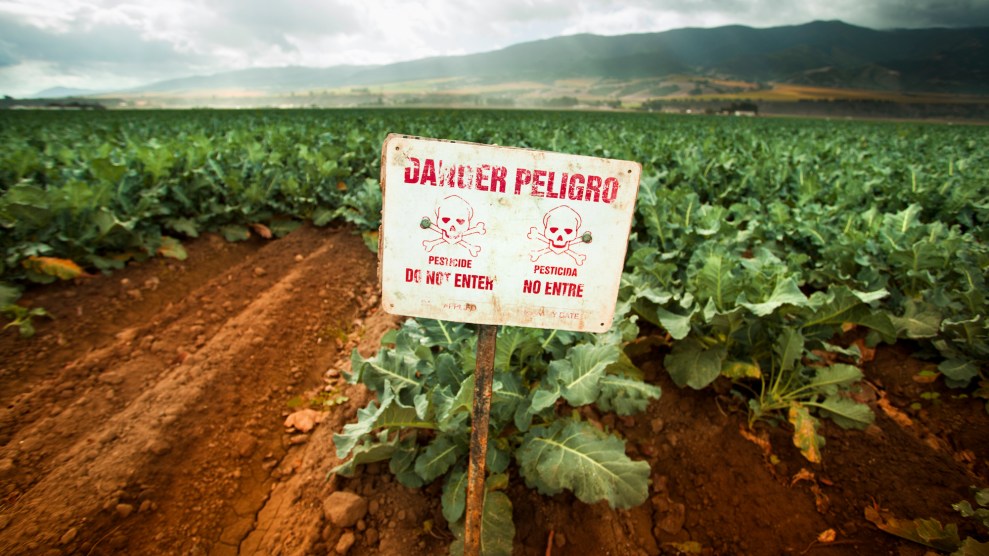 On May 5, more than 50 farmworkers outside of Bakersfield, California, were exposed to a highly toxic pesticide that apparently drifted from a nearby field—at a high enough level that “twelve people reported symptoms of vomiting [and] nausea and one person fainted,” reports the television news station Kern Golden Empire. “An additional twelve workers did not show signs of any symptoms,” the station reported. “However more than half of the farm workers left before medical aide arrived.”

“Anybody that was exposed, that was here today, we encourage them to seek medical attention immediately,” Kern County Public Health warned.

Public health authorities took the poisoning quite seriously. “Anybody that was exposed, that was here today, we encourage them to seek medical attention immediately. Don’t wait. Particularly if you’re suffering from any symptoms. Whether it’s nausea, vomiting, diarrhea, seek medical attention immediately,” Michelle Corson, public relations officer at Kern County Public Health, said in an announcement to the TV station.

According to the news report, the poisoning was caused by a chemical called chlorpyrifos. A spokeswoman for the Kern County Department of Public Health said the department assumes chlorpyrifos was the active ingredient in the pesticide in question, but the matter is still under investigation by the Kern County Department of Agriculture and Measurement Standards. A spokesman for that office said test results pinpointing the chemical are pending but would not be done for at least a week. Dow AgroSciences, one of the main makers of the chemical, did not respond to phone calls and emails.

Many public health experts, scientists, and environmentalists have for years been pushing for a ban on chlorpyrifos, and last year it was looking like the Environmental Protection Agency intended to instate one. According to the National Pesticide Information Center, exposure to the chemical through inhalation can cause initial symptoms like “tearing of the eyes, runny nose, increased saliva and sweat production, nausea, dizziness and headache,” followed by possible “muscle twitching, weakness or tremors, lack of coordination, vomiting, abdominal cramps, diarrhea, and pupil constriction with blurred or darkened vision.” Chlorpyrifos is an endocrine disrupter, and major studies (here, here, and here) have found strong evidence to suggest that even at very low doses, the chemical triggers effects among children ranging from lower IQ to higher rates of autism. More here.

But in March, the EPA abruptly changed its stance on chlorpyrifos, greenlighting it instead of banning it. The decision, among the first major ones made by Scott Pruitt in his tenure as EPA chief, caused outrage in public health circles. Dow AgroSciences applauded the decision. “Dow AgroSciences remains confident that authorized uses of chlorpyrifos products offer wide margins of protection for human health and safety,” the company declared in a press release.

The parent company, Dow Chemical, has cultivated a cozy relationship with the Trump administration. The company delivered $1 million to the president’s inaugural committee, the Center for Public Integrity notes. Dow Chemical Chairman and CEO Andrew Liveris attended a postelection Trump rally. Trump named Liveris chair of the American Manufacturing Council, vowing the chemical exec would “find ways to bring industry back to America.”