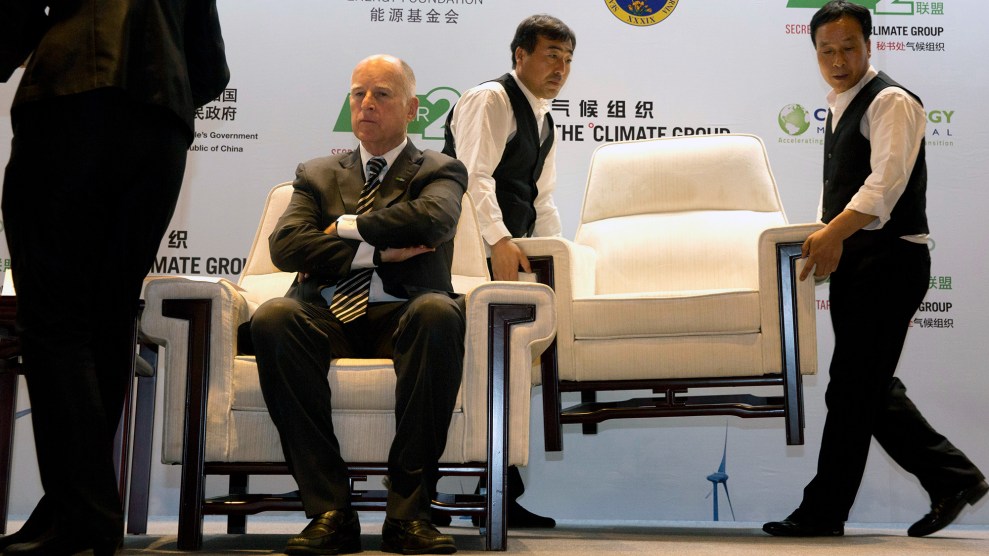 On Tuesday, I published a story about California’s governor Jerry Brown vacuuming up climate deals in China in an attempt to fill the void in American leadership on climate change left by the Trump administration. Brown has been on a multi-city tour of China, the world’s biggest emitter of greenhouse gases, to promote Golden State know-how, meet ministers, and ink multiple deals.

Overnight, I received an email from Harvard-trained analyst Ella Chou, who focuses on China with the National Renewable Energy Laboratory, a top government energy research lab in Denver, and was in the room with Jerry Brown in Beijing during an event this week. I had asked Chou what she thought California’s appeal was for China, and if a single state could exert as much pressure over China’s party leadership as could, say, a fully engaged national government.

Her full response is worth reading for insights into what’s next in the US-China climate relationship. Note the painful irony of some Chinese people being suspicious of US actions, given President Trump’s now-famous Tweet calling global warming a Chinese hoax to kill US manufacturing, and his false claim that the Paris agreement allows China to get away with doing nothing. Here is what she wrote, with my emphasis added:

China has an interesting obsession about California. It may be because of its large Asian population, the Silicon Valley wonders, or the Hollywood glamour. Either way, California is definitely one of the first places China looks to for inspiration and role model in terms of clean energy transition.
I think what California does best is “leading by doing.” In that aspect, I think it has been doing a great job by setting high ambitions, encouraging innovations, and welcoming bilateral exchanges. I’m not sure if it would be wise or effective for California to take a more “pushing” or “coercing” approach. There is no shortage of skeptics or conspiracy theorists in China: Once the intention becomes too clear, it may backfire and lead those folks to say “climate change is a U.S. hoax for China to do more and slow down its economic development, while U.S. is doing nothing.”
Part of what we are currently doing in China is to point them to California and subnational efforts, by the state, private sector, NGOs, research institutes, to say, “Hey, even though our President is pulling out of Paris, there’s a lot of going on still in the U.S., so you guys shouldn’t sit back and be idle.”
My sense is that the climate leadership is now falling on the Europeans (Germans and Danes are particularly active in this space in China), however, the Chinese leaders know that they need to make a lot of efforts on climate, environment, and energy regardless of what U.S. federal government is doing, so I’m expecting them to gradually take a more leadership role in that as well.