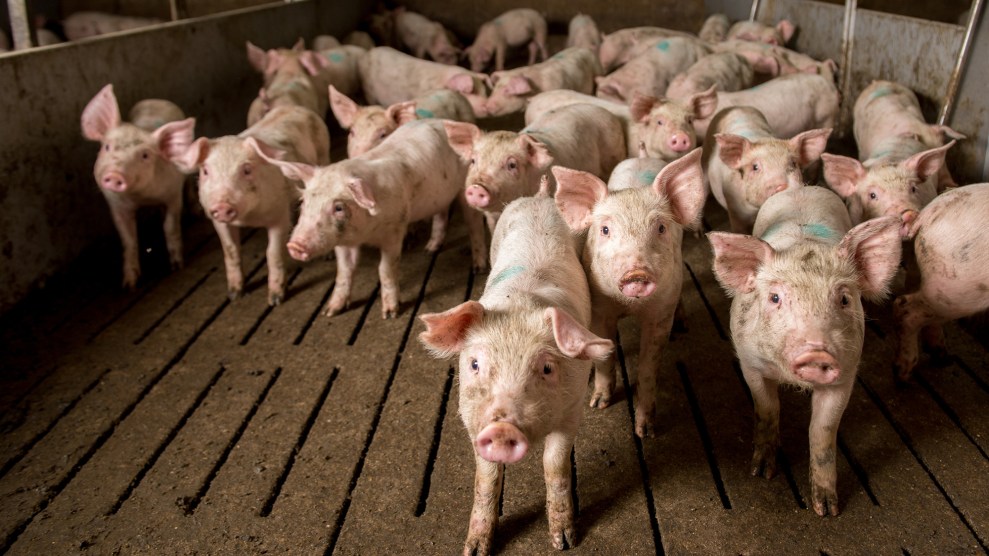 A recent study from Denmark shows that a strain of drug-resistant staph carried by pigs is causing severe illnesses in people who have no contact with pigs or farms. The infections have occurred even though Denmark has some of the most stringent controls on antibiotic use and the study’s authors say the United States may be risking similar undiagnosed infections.

The study by American and Danish researchers, published May 30 in the journal Clinical Infectious Diseases, analyzes records of antibiotic-resistant infections routinely collected by the Danish national health system. It finds that, between 2010 and 2015, a strain of staph known as “livestock-associated MRSA” caused an increasing amount of bloodstream infections, rising in 2014 to 16 percent of all the bloodstream infections caused by resistant staph.

That is a notable amount, because livestock MRSA—which has the technical strain designation CC398 and is often just called “pig MRSA”—was only identified in Denmark in 2004. That was the same year that the pig strain was identified for the very first time, in hog farmers in the Netherlands. Previously, drug-resistant staph had been considered only a human problem, spilling out from hospitals into schools and sports teams. Subsequently, the new strain was traced to pigs that had received routine antibiotics in large-scale confinement farming; it spread across Europe, and was found in Canada and the United States.

“The worry from day one is that this could evolve from being less transmissible to much more so.”

Lance B. Price, PhD, the founding director of the Antibiotic Resistance Action Center at the George Washington University and one of the study’s senior authors, said that in the years since it was first identified, livestock-associated staph has acquired a reputation as a benign bug that causes only mild infections. The analysis of the Danish cases, which represent one of the most complete data sets anywhere on antibiotic-resistant infections, shows that not to be true, he said.

“We knew that livestock-associated MRSA causes some bloodstream infections, but once we looked at the number we realized that Denmark had had an explosion—even though they have many fewer MRSA cases than the United States, there had been a real increase over time in how many of them were caused” by the pig-related strain, he said.

The data also showed that the livestock strain was moving through the country, because 59 percent of the bloodstream infections occurred in people who had no contact with livestock.

That’s worrisome, Price said, because people who work with livestock tend to be young and healthy, whereas the wider population is more likely to contain people whose immune systems have been undermined by age or disease. It’s possible, he said, that the pig strain of MRSA doesn’t deserve its reputation as a mild bug, but earned it only because it first caused infections in people who are sturdy enough to fight off its worst effects.

One of the mysteries of the study is why the Danish infections—plus a wider outbreak of skin infections also caused by the pig strain—exist at all. It’s generally accepted that antibiotic use drives the emergence of antibiotic resistance; the more the drugs are prescribed, the more bacteria are pushed to adapt and defend themselves. Yet Denmark strictly limits antibiotic use in agriculture and in medicine. (By contrast, when the very first cases of pig MRSA were found in the Netherlands, that country had one of Europe’s lowest rates of antibiotic use in medicine—but one of the highest rates in farming.)

It’s also not known how the strain entered Denmark. It is possible that it could have arrived via a pig traded across borders, or with a person who was carrying the pig strain unknowingly—or possibly both, Skov said; the strain may have been introduced to Danish agriculture multiple times. What has kept it from taking over is that livestock MRSA appears to be less transmissible between humans than other forms of MRSA.

“But the worry from day one,” he said, “is that this could evolve from being less transmissible to much more so.”

The research team was able to trace the disease moving between pigs and people because Denmark conducts comprehensive surveillance of human infections and animal strains. That isn’t true in the United States, where there is very little surveillance of drug resistance in live animals, and scientists trying to trace MRSA’s movement have had trouble persuading livestock producers to cooperate.

“We don’t have the system the Danes do to assess MRSA in people; we don’t even track staph,” Price said. Yet judging by the Danish results, Americans are vulnerable. Rural American communities are full of the same sort of older people suffering from chronic illnesses who were more likely to have pig MRSA infections in Denmark.