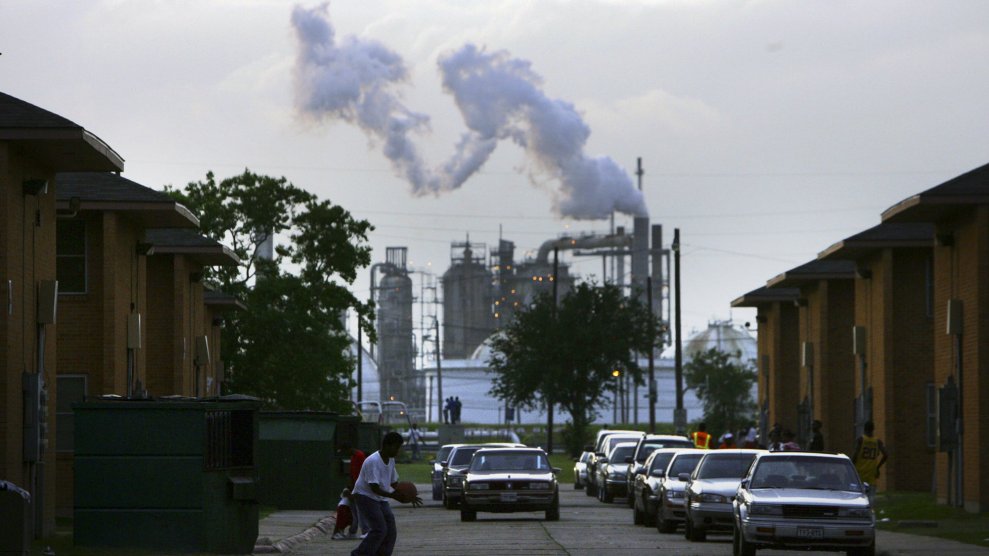 A child plays in front of a public housing project which borders an oil refinery in West Port Arthur, Texas.LM Otero/AP

Environmentalists have long contended that communities of color are disproportionately affected by pollution from the oil and gas industry, and a study released on Tuesday details the extent of the harm.

According to Fumes Across the Fence-Line, a report from the NAACP and the Clean Air Task Force—an advocacy group dedicated to reducing air pollution—black people are 75 percent more likely to live in so-called “fence-line” communities that are next to industrial facilities. These facilities release a toxic stew of pollutants—including formaldehyde, which has been linked to cancer, and benzene, which has been linked to brain damage, birth defects, and cancer. Using the data on how many Americans are affected by toxic air pollution that CATF compiled for their Fossil Fumes and Gasping for Breath reports, the new study focuses on the specific impact of pollutants in the air on black Americans.

Most fence-line community residents are low-income and predominantly of color. The study reports that more than 1 million black people live within just half a mile of an oil or gas facility and face serious health risks such as cancer, asthma, and other respiratory diseases as well.

The Environmental Protection Agency’s National Air Toxics Assessment estimates cancer risk by measuring the number of cancer cases per million people exposed to toxic air emissions. Areas with a risk higher than one-in-a-million are considered above the agency’s “level of concern.” There are over 200 counties in 21 states where cancer risks reach such a level. In 2015, of the more than 9 million people who lived in those counties, 1.1 million were black—the highest numbers were in Texas, Louisiana, and Oklahoma.

One of those communities is West Port Arthur, Texas, a town that is 95 percent black and home to two oil refineries that process more than 900,000 barrels of crude oil every day. The Valero refinery is one of the largest in the world and borders the town. Several low-income public housing complexes, which mostly house black residents, line the facility’s fence. West Port Arthur is in Jefferson County, where cancer rates among black people are 15 percent higher than those of the average Texan. These residents are 40 percent more likely to die from the disease.

Port Arthur was hit hard by Hurricane Harvey in August and shut down its refineries due to severe flooding. These abrupt shutdowns can release large concentrations of toxic chemicals “in a matter of hours,” according to the report. After the storm, community organizer Hilton Kelley told the Texas Tribune that there was “a very pungent odor of sulfur dioxide and other toxic chemicals” in the air. “It makes your eyes water, it stings your sinuses, and it creates a scratchy feeling in your throat,” Kelley said.

“The ills brought onto the West Port Arthur community violate basic human rights to a clean and livable environment.”

The authors of the report note, “The ills brought onto the West Port Arthur community violate basic human rights to a clean and livable environment. Air pollution from oil and gas facilities, permitted or otherwise, is a continued violation of this basic right.”

Asthma is a another dire health impact facing black communities living near oil and gas facilities. About 13 percent of black children have asthma compared to just 7 percent of white children, and their death rate from the illness is higher than for white children—one per 1 million compared to one per 10 million.

Philadelphia Energy Solutions, the oldest fossil fuel refinery on the East Coast emits a multitude of toxins—including ammonia, benzene, and sulfuric acid— and is responsible for 72 percent of the toxic air emissions in Philadelphia. The citywide childhood asthma rate is more than twice the national average. When PES sought a permit to expand its operations in July 2016, community members protested. “My little boy, 10 years old now, has had asthma since he was born,” Maxine McClearly, a Philadelphia resident told the Philadelphia Regional Port Authority, at a meeting. “Philadelphians have the right to breathe,” she added. In November 2016, the expansion was called off.

According to the report, the locations of these polluting facilities are usually because companies prefer to take advantage of communities with little political or economic power. But, the report concludes, it doesn’t have to be this way. “The air pollution that plagues communities across the country does not have to and should not exist,” the authors wrote. “It is time to ask ourselves, what are we willing to do to ensure a clean and healthy future?”