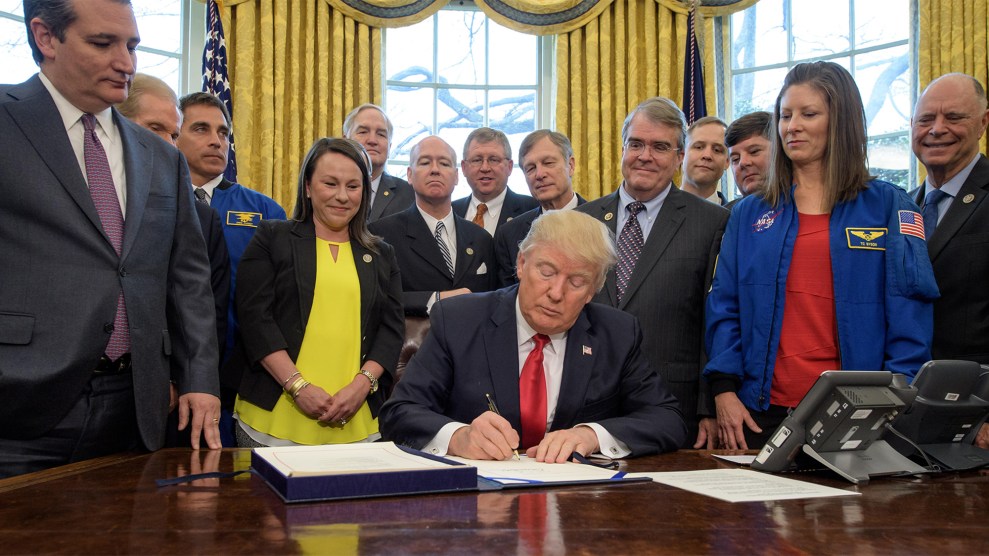 Donald Trump’s nominee for NASA administrator was approved by a Senate committee last week, on a 14–13 vote. The result, split entirely down party lines, with Senate Republicans voting in favor, gives the new nominee—Jim Bridenstine, a Republican U.S. representative for Oklahoma’s 1st District—the distinction of being the most politically polarized NASA leader in the typically nonpartisan agency’s history.

The Senate Committee on Commerce, Science, and Transportation, the 27-person committee responsible for approving the nominee, first voted on Bridenstine’s nomination on Nov. 8, in a 14–13 vote that also divided strictly across party lines. The Senate never got around to holding the full vote, though, forcing the White House to resubmit Bridenstine’s nomination and causing the committee to once again vote 14–13 in favor of his nomination last week. The nomination is now on the Senate’s executive calendar, though it’s still unclear when the vote will be held—it might not happen for several weeks.

The partisan division exhibited in each of these votes is extremely unusual for the NASA administrator position, and it’s why we’re hitting the longest patch ever for NASA to go without a permanent director. Charles Bolden, the head of NASA under President Obama, was confirmed on a unanimous vote. So was his predecessor, Michael Griffin, for George W. Bush. Daniel Goldin, NASA administrator from April 1992 to November 2001, worked under both Bush administrations as well as during the entirety of Bill Clinton’s two terms in office. Pretty much every NASA administrator has been nominated and confirmed to bipartisan acquiescence and very little fanfare, much less controversy. It’s supposed to be a quick, boring process.

So what’s the holdup this time around? One reason is that if confirmed, Bridenstine would be the first congressman to lead NASA. He doesn’t have a strong science background, unlike every other NASA administrator that has preceded him. He’s not a former astronaut, like a few have been (Bolden and Richard Truly both were). He is a former pilot in the Navy Reserves, and other administrators have served in the military, too (Truly was a retired vice admiral in the Navy). And some previous NASA chiefs held other White House jobs prior to their nomination (like James Webb, NASA administrator from 1961 to 1968—he had previously served as undersecretary of state under President Truman).

“It’s the one federal mission which has largely been free of politics and it’s at a critical juncture in its history.”

But none were politicians. “I just think it could be devastating for the space program. … It’s the one federal mission which has largely been free of politics and it’s at a critical juncture in its history,” Florida Sen. Marco Rubio told Politico in September, when Bridenstine’s nomination was announced. “I would hate to see an administrator held up—on [grounds of] partisanship, political arguments, past votes, or statements made in the past—because the agency can’t afford it and it can’t afford the controversy.”

Sen. Bill Nelson, a Democrat, also from Florida, echoed those concerns at the November committee hearing, saying, “The NASA administrator must have a strong scientific or technical background. And the NASA administrator must not be political.” He told Bridenstine, “Your recent public service career does not instill great confidence about your leadership skills or ability to bring people together. … In fact, your record and behavior in Congress is as divisive and extreme as any in Washington.” As evidence, the committee’s 13 Democrats pointed to Bridenstine’s past comments deriding the Supreme Court decision to declare same-sex marriage constitutional and legal protections for transgender students using bathrooms, as well political barbs against fellow Republicans like Rubio, House Speaker Paul Ryan, and others.

Perhaps most worrisome, though, is Bridenstine’s climate change–denying past. He previously introduced legislation into Congress that would nix earth science from NASA’s overall mission. He’s expressed dubious views on climate change, telling the floor of the House in 2013, “global temperatures stopped rising 10 years ago. Global temperature changes, when they exist, correlate with sun output and ocean cycles. During the Medieval Warm Period from 800 to 1300 A.D.—long before cars, power plants, or the Industrial Revolution—temperatures were warmer than today.”

All of that is wrong. Temperature rise slowed around 2013, but the overall rise in temperatures hasn’t stopped, even as sun output has decreased. And the past two years have been the hottest on record, no question.

At his November testimony Bridenstine promised not to interfere with NASA’s climate research and conceded humans are contributing to climate change. But like other Republicans, he raised the caveat that he doesn’t believe he knows how large the human contribution has been. “It’s going to depend on a lot of factors and we’re still learning more about that every day,”he told the Senate committee. “In some years you could say absolutely, in other years, during sun cycles and other things, there are other contributing factors that would have maybe more of an impact.”

That’s not an encouraging sign that Bridenstine will put science first. And NASA conducts integral functions in assessing climate change, even though Trump is already making moves to dismantle that work, with plans to defund five earth science missions. It’s very hard to imagine Bridenstine will attempt to reverse those changes or replace those missions in some way. His nomination is indicative of a divisiveness the agency has never really grappled with before. Perhaps that’s why it’s taking so long for him to gain approval.