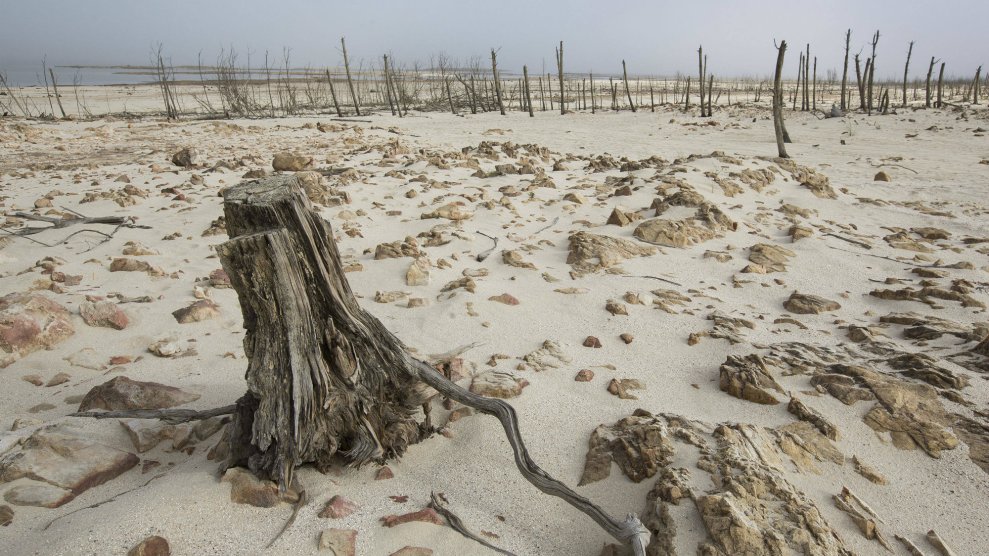 Cape Town is headed for unknown territory. After years of drought, the city of 4 million on the Western Cape of South Africa is facing an unprecedented disaster: Unless a major rainstorm occurs, officials are predicting that on or around April 12 the city’s water supply will run dry. After that, most residents will have to stand in line at designated areas to get their rations of water.

The crisis has been caused by the intersection of global warming with, as some critics charge, poor planning by government officials. Though the city tried to several methods to prevent this catastrophe, they are preparing for the worst. “We have reached a point of no return,” Mayor Patricia de Lille said in a statement in January. If there is no rain, Cape Town will be the first major city in the world to run out of water, but it probably won’t be the last. Thanks to climate-fueled droughts, water shortages will likely become a widespread global problem in the coming decades. “If current patterns of consumption continue unabated, two-thirds of the world’s population will be facing water shortages as a daily reality by 2025,” Bolivian President Evo Morales said at the United Nations last year.

So, how did Cape Town get to this point? For years, South African government officials have warned the city about its looming problems, especially because Cape Town relies so heavily on on rain to supply its water. With its rainy season typically running from May through September, rainfall has been minimal since 2015 when the drought began. In 2016, the city’s dams were 78 percent full. By 2017, that number had dropped to 49 percent. Today, reservoirs are only a dismal 27 percent full. To make matters worse, the last 10 percent of the water in the dam is unusable.

By September 2017, each resident was restricted to just 87 liters or 23 gallons a day. Reportedly, only 54 percent of the population hit complied with restrictions. Starting on February 1, Cape Town residents will be limited to 50 liters or roughly 13 gallons per day, until the taps are cut off on what has been dubbed “Day Zero”—that’s when the city’s six reservoirs will reach 13.5 percent.

At that point, all non-essential taps will be turned off or reduced. Hospitals will still have water, but most residential homes will not. Each person will be limited to 6.6 gallons a day, and residents will be required to travel to one of the 200 planned water points to get water for all their supply. To give some sense of the proportions of the shortage, according to the US Geological Survey, the average American uses 80 to 100 gallons of water every day for drinking, bathing, laundry, and cooking.

Immediately questions about access to this water arose. Will there be enough water points?  How will those with disabilities, the elderly, or homebound, be guaranteed water? The city has “provided so few details that it is difficult to assess how these stations will work and if they will have sufficient capacity,” Nathan Geffen, the editor at GroundUp, a University of Cape Town news site, told Mother Jones in an email. He noted that given “the little information we have, it doesn’t seem that 200 points will be enough.”

One simply has to do the math. According to Geffen, there are over 1 million individual households, and a quarter of them are informal settlements, clusters of poor residents living in shoddy homes. City officials have said that they will not cut off water to those settlements but have hinted at a reversal on the policy in recent days. But even excluding informal settlements and an estimated 50,000 residential taps that will still have water, 700,000 households will be dry. Under the best of circumstances, Geffen says, half of those households might manage to subsist on bottled water, collected rainwater, and residual water left in swimming pools. Nonetheless, 350,000 households will still need to visit the 200 water points. Assuming they are distributed evenly, that leaves 1,750 households per water point.

“Each water point would have to service 145 households an hour, if they operated 12 hours a day. That’s a daunting task with a great deal of optimistic assumption making.”

“Each water point would have to service 145 households an hour, if they operated 12 hours a day,” Geffen says. “That’s a daunting task with a great deal of optimistic assumption making.”

But will residents who are able to make it to the water points even be able to bring their supply home? “Cape Town is a geographically spread out and oddly-shaped city,” Geffen says. “[O]n average, the person collecting water for each household will have to drive or walk a few kilometers every day.” This is an especially acute issue for low-income people who may lack transportation and not be able to travel every day to a water point, wherever it may be. As for security, city leaders have said that 20 safety officials would be present at “low-risk” water points and up to 70 for “high-risk” water points, where there may be a chance of conflict.

These calculations don’t even include the unique problems for people with disabilities or elderly residents. City officials told South Africa’s Sunday Times that bulk water would be made available for those who volunteer to deliver water to vulnerable residents, but they would be limited to 100 liters or about 26 gallons.

Some scientists still believe these dire scenarios can be avoided if water is more restricted and some rain falls. “It might take three years to fully recharge the dams,” Kevin Winter, a hydrologist at the University of Cape Town wrote in GroundUp in January, “but it would take only one major thunderstorm over the next 90 days to push Day Zero a little further out.”

But that’s a short-term fix for a long-term problem. “If we dodge Day Zero this year,” Geffen explains, “It’s still on the horizon for 2019.”