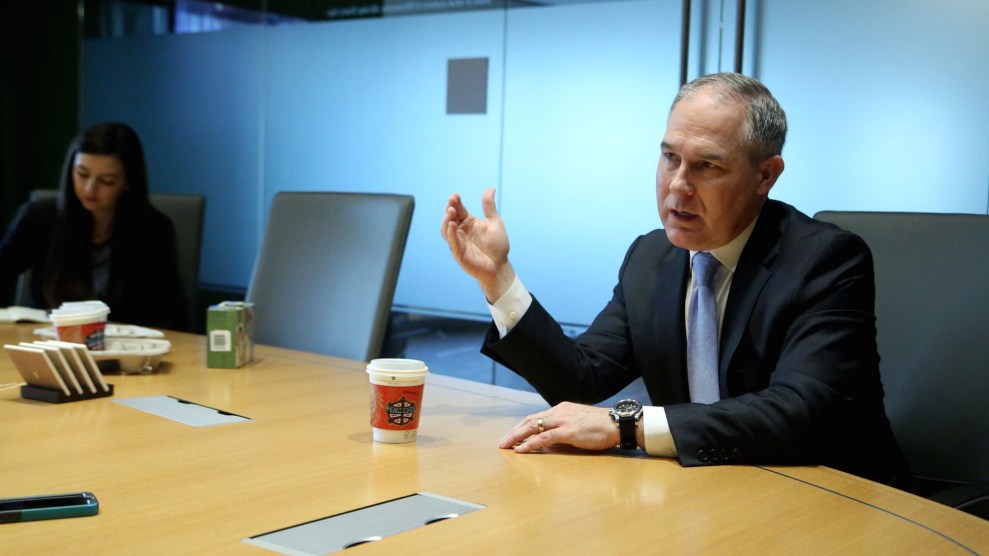 Environmental Protection Agency experts were worried that Administrator Scott Pruitt was spreading “troubling” and “inaccurate” information to justify reversing the agency’s Obama-era fuel efficiency standards, according to emails released through the Freedom of Information Act.

The emails obtained by Greenpeace’s Unearthed investigations team shed additional light on Pruitt’s reliance on information provided by a small group of advisers, conservative groups, and industry while sidelining staff expertise at the EPA. The emails, also reported by Politico Pro, show career staff who were eager to correct inaccurate talking points surrounding his rollback of the EPA’s fuel economy standards. Since the emails were circulated among career staff, it is not clear if Pruitt and his team of political appointees were made directly aware of these concerns.

Just last week, amid new revelations about his ethical conduct, Pruitt reversed EPA standards that would have doubled the average efficiency of new cars and light trucks to 54.5 mpg by 2025. Known as the Corporate Average Fuel Economy (CAFE) standard, the rule was a pillar of the Obama administration’s efforts to tackle greenhouse gas emissions and was expected to cut American oil consumption by 1.2 billion barrels while the vehicles were in use. The auto industry had agreed to the rule in 2012.

But after Trump’s election, the industry embarked on a heavy lobbying effort for the administration to ease the standard. On March 15 2017, Trump delivered. At an event with Pruitt and auto executives in Detroit, a few weeks after the administrator was confirmed, Trump directed the EPA to roll back the standard.

On March 9, Pruitt appeared on CNBC setting the stage for Trump’s announcement. He argued that the EPA did not recognize the “great progress that’s been made with those standards,” and that the agency “largely disregarded” Detroit manufacturers’ request “that they wanted to evaluate the impact of the previous standards.” But there was a problem.

“This inaccurate statement is very troubling,” wrote EPA’s Director Office of Transportation and Air Quality Christopher Grundler, to two staffers in the Office of Air and Radiation, but he did not provide more explanation. It was not entirely clear what inaccuracies Grundler was referring to in the email, but he may have been concerned with Pruitt’s accusation that the EPA didn’t vet the standard thoroughly. In its midterm review in early January 2017, the EPA had determined that the targets were well within reach based on existing technology. The EPA issues an annual trends report that includes extensive research about the US auto market, and it showed that the industry was already adjusting to the higher standards.

As early as March 9, the EPA Transportation and Climate Division director wondered if the staff should send a copy of the trends report to Pruitt’s chief-of-staff, Ryan Jackson, to correct any misunderstanding.

Then, ahead of Trump’s official rollout last year, the EPA public affairs office requested help with messaging around the CAFE announcement. Grundler emailed feedback to his colleagues on March 13 in which he flagged multiple factual errors:

We did do a qualitative employment analysis in the rules. We can get you what we said if you want but bottom line is it was inconclusive and in any event overwhelmed by macro-economic events. Others have shown that the [standards] have led to increased employment—especially in engineering—throughout the supply chain and at automakers.

Asked for comment on whether Pruitt or Jackson were aware of career staffers’ concerns, EPA spokesperson Liz Bowman replied, “The Administrator worked closely with experts in the Office of Transportation and Air Quality in the development of the final determination  released earlier this month, an announcement that reflects the latest technical information and collaboration between EPA’s career and political leadership.”

Shortly after the formal announcement on March 15, frustrated career staff pointed out the inaccuracies still circulating in Pruitt’s op-ed in USA Today that appeared on March 20. In the piece, Pruitt had cited an analysis by the now-defunct conservative think tank National Center for Policy Analysis that claims “these standards have pushed manufacturing and jobs to Mexico.”

Several staff noted the author did not appear to have a background in CAFE, greenhouse gasses, regulatory work, or economics. Senior adviser Jeff Alson wrote he found the LinkedIn page for the author of the report:

Bottom line-this blog was written by a 23 or 24 year old, with a bachelor’s degree in business less than a year ago, now working in a “supply chain rotational role,” and whose only other highlighted activity besides this one blog is volunteering in his church. Based on his own resume and my web search, he has written no other blogs or articles or papers.

Explaining that the author had “no analytical rationale” in his critiques and understanding of the standard, Alson added, “Oh, and his 1-page blog full of errors has been cited in WH talking points and an Administrator op-ed in USA Today.”

There have been other documented examples of Pruitt sidelining experts at the EPA, surprising them with press releases that adopt industry talking points, and accusing staff of ignoring the costs of regulations. In reality, major rules like the fuel economy standards are subject to a multi-year, multi-step consideration that includes vigorous study of the costs and benefits and public comment.

On his first day at the EPA, Pruitt adopted a more empathetic posture than the one he subsequently adopted in interviews. He told his new staff in February 2017, “I seek to listen, learn, and lead with you to address these issues that we face as a nation.”

It didn’t take career staff long to realize the comments were insincere. After his March 9 appearance on CNBC, where the administrator repeated his line about his intent to listen, EPA senior policy advisor Robin Moran wrote: “[H]e says, ‘I’m listening to industry’…ah, I get it now, that’s what he meant about listening.”