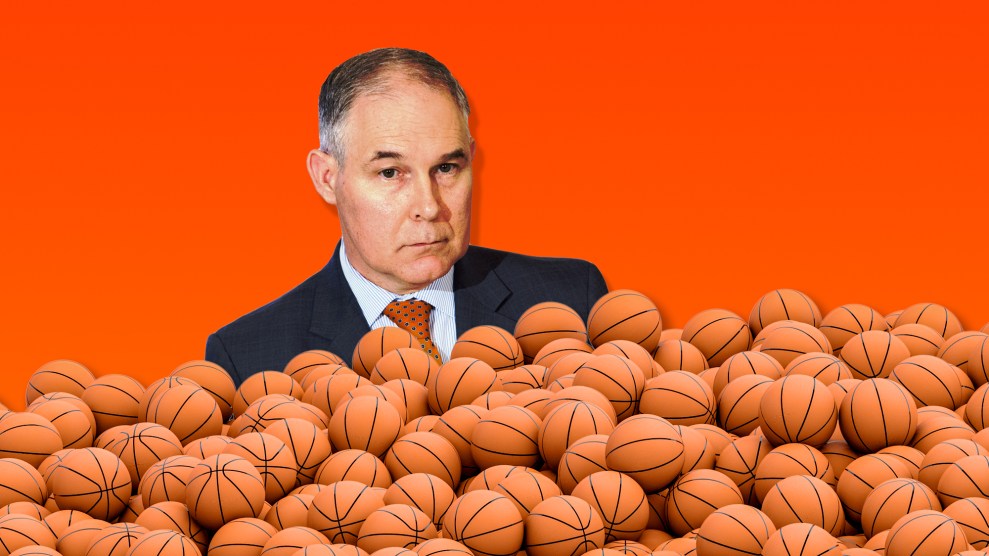 First-class flights totaling more than $105,000, a $43,000 secure phone booth, a $50-a-night condo linked to lobbyists, $1,560 on a dozen customized fountain pens, and now a pair of $130 basketball tickets purchased in cash from a billionaire coal executive. The list of controversial purchases by Environmental Protection Agency Administrator Scott Pruitt and the agency he runs keeps growing.

On Saturday morning, the New York Times reported that Pruitt scored two of the best seats in the stadium to one of the University of Kentucky basketball team’s biggest games of the season in Lexington, Kentucky, in December. Pruitt was also seen in the players’ entrance as the team took the court. The seats for Pruitt and his son were in a section of the arena reserved for people who had donated at least $1 million to the university. Pruitt purchased the tickets from Joseph W. Craft III, the head of Alliance Resources Partners and a major Trump donor who has fought to undo Obama-era coal regulations, according to the Times.

When the EPA approved Pruitt’s purchase of the basketball tickets, it stated that they would be paid for by check. Pruitt paid cash instead, which means there is no receipt. An EPA spokesman did not respond to inquiries from the Times about why Pruitt paid cash. Heath Lovell, vice president for public affairs at Alliance, said Craft sold Pruitt the tickets at “market value.”

The Times reports that the basketball tickets symbolized a close and ongoing relationship between Pruitt and Craft—dating back to Pruitt’s time as a Oklahoma official:

Mr. Pruitt’s attendance at the game, the details of which have not been previously reported, followed a year of regulatory victories for Mr. Craft, who maintains close ties to Mr. Pruitt even as he has lobbied the E.P.A. on issues important to his company, Alliance Resource Partners. And unlike other executives with whom Mr. Pruitt is known to have close ties — like the oilman Harold Hamm or the coal mogul Robert E. Murray — Mr. Craft has stayed relatively under the radar.

A major contributor to Mr. Pruitt’s campaigns in Oklahoma when Mr. Pruitt served in state government, Mr. Craft saw Mr. Pruitt at least seven times during his first 14 months at the E.P.A., agency records and emails show, and they were scheduled to appear together on at least two other occasions. That is more than Mr. Pruitt has met with representatives of any environmental group.

Pruitt also met with the board of Craft’s company in a private dining room at President Donald Trump’s Washington hotel, according to the Times. Craft, who has worked in the coal industry for nearly four decades, reportedly never set foot in the EPA’s headquarters before Trump became president.

Pruitt is already the subject of a dozen investigations. Along with the sound booth, travel, and condo rental, Pruitt is being investigated for allegedly encouraging a coal industry group to pressure Trump to pull out of the Paris climate change agreement. The EPA inspector general is also looking into Pruitt’s 24-hour security detail, which includes at least 20 people and cost taxpayers nearly $3.5 million in his first year in office.

Mother Jones reporter Rebecca Leber profiled Pruitt in the cover story to the March/April issue of the magazine. She wrote that Pruitt may aspire to do much more than run the EPA:

For those of us who cover the EPA, Pruitt’s profound impact on policy has been hard to miss. What’s tougher to see, behind the secrecy and paranoia, is how his new job has advanced his own future plans. There have been rumors he is interested in replacing Jeff Sessions as attorney general and whispers that he sees himself as a future president. His zeal—or overzealousness—might be seen as typical behavior for an inexperienced man thrust into the major leagues of a Cabinet position. But his political calculations and driving ambition can all be traced 1,210 miles west of Washington, DC, to the place he’s called home for nearly three-fifths of his life.

Read Leber’s full story here. And listen to Rebecca explain the roots of Pruitt’s ambition on the most recent episode of the Mother Jones Podcast: