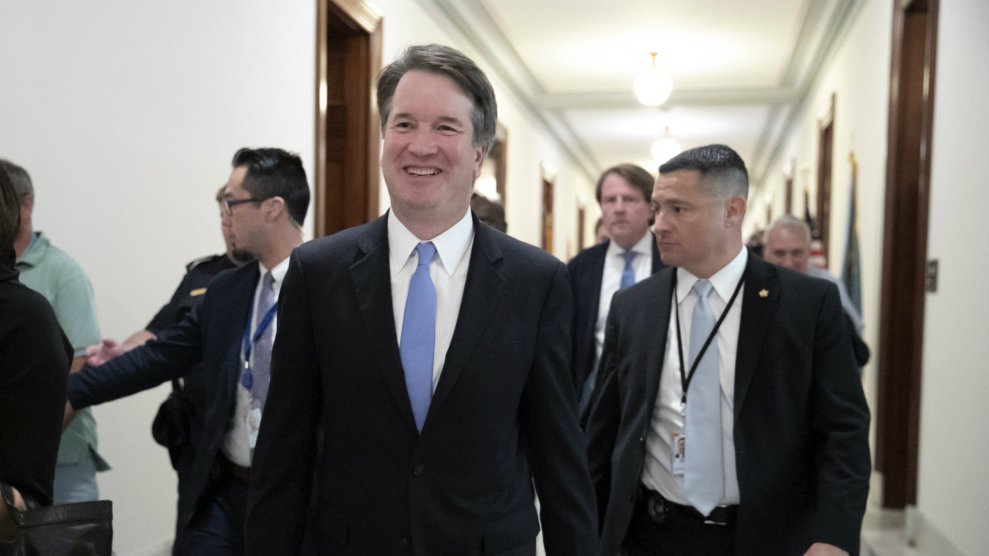 If Judge Brett Kavanaugh becomes Supreme Court Justice Kavanaugh, activists who regularly use the courts to protect wildlife will need to rethink their legal strategies.

An analysis of Kavanaugh’s 12-year record on the US Court of Appeals for the DC Circuit finds that he has consistently ruled against measures to protect species. In the 18 significant, species-related suits that have come before Kavanaugh, he’s decided against protections in 17—or about 95 percent of the time.

This analysis comes from William Snape, an assistant dean at American University’s Washington College of Law and senior counsel with the nonprofit Center for Biological Diversity (CBD). The group is supporting the US Fish and Wildlife Service in an Endangered Species Act case set to go before the Supreme Court this October, one that advocates say could have a lasting impact on species protections.

In Weyerhaeuser v. US Fish and Wildlife Service, the world’s largest timber company is challenging a federal decision to designate 1,544 acres of land in Louisiana as critical habitat for the dusky gopher frog, of which only 100 or so are left in the wild. Recently-retired Justice Anthony Kennedy was a centrist whose swing vote sometimes landed environmental cases like Weyerhaeuser in favor of protection. But Kavanaugh’s confirmation to the court would give it an even stronger 5-4 pro-business majority, dramatically stacking the odds against species in future decisions.

By comparison, Judge Merrick Garland, whom President Bill Clinton appointed to the same court in 1997, favored wildlife protection in about 54 percent of his species-related cases.  President Barack Obama nominated Garland to the Supreme Court in 2016, only to have the Republican-controlled Senate refuse to consider his nomination.

In writing the Endangered Species Act as it did in 1973, Congress largely deferred to the expertise of the Interior Department in protecting endangered species, said Snape. But Kavanaugh’s past decisions have tended to ignore that, particularly in cases that affect how private land can be developed.

One such case was 2011′s Otay Mesa Property v US Department of Interior decision, in which Kavanaugh led a majority of judges in reversing a lower court’s decision that federal wildlife scientists had properly determined that 143 acres of land owned by developers near Chula Vista, California, along the state’s border with Mexico, were critical habitat for the endangered San Diego fairy shrimp.

Kavanaugh wrote in the majority opinion that one “lone sighting” across eight surveys of the “tiny aquatic animals—about the size of ants,” with a life span of “only about 30 days,” was inadequate proof that the species’ habitat included the land the Interior Department was proposing to protect.

The ruling came despite the fact that the species was, by definition, rare and that the Interior Department’s own experts had concluded the opposite—that given their tiny size and documented low hatching rate, finding even one fairy shrimp in Otay Mesa was good evidence that the species still occupied the area.

“It’s a hostility towards public interest science and the notion that there actually are any limits to economic growth. He just never—almost never—disagrees with those corporate legal arguments.”

Kavanaugh decided, Snape said, “essentially to second guess the scientists’ determination of where a species could recover.”

Snape argues that such judgements are in line with Kavanaugh’s arch-conservative political beliefs, which prioritize property rights above all else.

“I would say that it’s a hostility towards public interest science and the notion that there actually are any limits to economic growth,” said Snape. “He just never—almost never—disagrees with those corporate legal arguments.”

Kavanaugh’s past votes display a “striking pattern of deciding against the interest of the species,” said Sarah Krakoff, a law professor at the University of Colorado Boulder.

“There is no pattern of either deferring or not deferring to the government,” added Krakoff. “The pattern really is that whoever is asking for more protection for the species loses.”

When Congress passed the Endangered Species Act and President Richard Nixon signed it into law 45 years ago, there was no partisan divide on saving species or creating science-backed policies to do so. But in the decades since there’s been a lot of very successful advocacy by property rights groups like the Federalist Society that “makes it seem as if the Endangered Species Act is pitted strongly against individual rights and freedoms, individual property and paints the specter of the big, bad government preventing people from doing what they want with their property,” Krakoff said.

And while the idea that species protections are trampling on the rights of homeowners and small businesses has become popular, “often the real movers and shakers behind opposition to the Endangered Species Act and other environmental laws” are much bigger players, Krakoff said, pointing to major real estate and natural resource developers.

In the upcoming Weyerhaeuser case, a ruling against the Department of Interior could lead to new hurdles in creating species recovery plans, such as requiring new cost-benefit analyses.

Krakoff doesn’t think this would substantially weaken the core protections of the Endangered Species Act. But she worries that before the end of the term, Republicans in Congress may manage to pass a suite of bills that would gut the law’s core provisions.

She also worries about the broader effect of Trump’s two dozen nominees to federal judgeships in district courts across the country, which will affect lower court cases for decades to come.

“It’s worrisome, even with a statute as powerful as the Endangered Species Act, if we have more judges in the lower courts, and now perhaps the Supreme Court, that [are] very willing to second-guess agency decisions that are protective of species and therefore in the main, following statutory directives,” said Krakoff. “It may just mean that advocates have to get even more strategic than they’ve been with the kinds of cases they raise.”

Being more strategic could include avoiding suits that turn on sections of the law that Congress worded broadly, as a way of giving future agency chiefs and researchers room to factor scientific advances into saving species and their habitats.

Patrick Parenteau, a professor of environmental law at Vermont Law School, is more wary of tying Kavanaugh’s decisions to a particular political bias.

Kavanaugh seems to be “very skeptical of agencies asserting authority where the impacts of their authority have significant or at least perceived significant economic consequences.”

But a decision like Kavanaugh’s in Otay Mesa does suggest he may be dismissive of scientists’ conclusions about species protections. “When you see a judge continually refer to a species as ‘as big as an ant,’ you know what he’s thinking: “This is ridiculous,'” Parenteau said. “So he’s imposing some of his value judgments on what constitutes good science.”

While the court’s more liberal justices would give the benefit of the doubt to the species and the agencies charged with protecting them, Parenteau said, Kavanaugh’s past rulings suggest he is less inclined to do so.

Such an approach certainly wouldn’t bode well for the dusky gopher frog whose fortunes are at stake in Weyerhaeuser. The current population of the frog is located over the Mississippi state line. But the Louisiana land contains breeding pools within the frog’s historic range that wildlife biologists have determined would be a good place to establish a new breeding population and ideally allow the species to be removed from the Endangered Species list.

Weyerhaeuser argues that the Fish and Wildlife Service is overreaching—there’s no natural way the frog can relocate to the area, and designating the land as essential critical habitat would cost the company up to $34 million in lost development value. Weyerhaeuser said in a statement that while it “strongly supports species conservation and the Endangered Species Act … in this case, designation was applied to a tract of land where the species has not been present for decades and where the specific habitat conditions it requires do not exist.”

Kavanaugh’s nomination to the Supreme Court highlights how much disagreement remains over the economic costs and benefits of environmental regulations, Snape said. American law doesn’t yet account for the ways in which protecting a frog or a tiny fish benefits the public interest, or how to balance that effectively against corporate political power.

That is why Snape and other advocates are nervous about a case like Weyerhaeuser going before a court that includes Kavanaugh.

“This is not just about gopher frog ecosystems in Louisiana,” said Snape, but about federal authority to use the best available science to create critical habitat and recovery plans nationwide. “This is absolutely about shooting an arrow through one of the major pillars of the Endangered Species Act.”