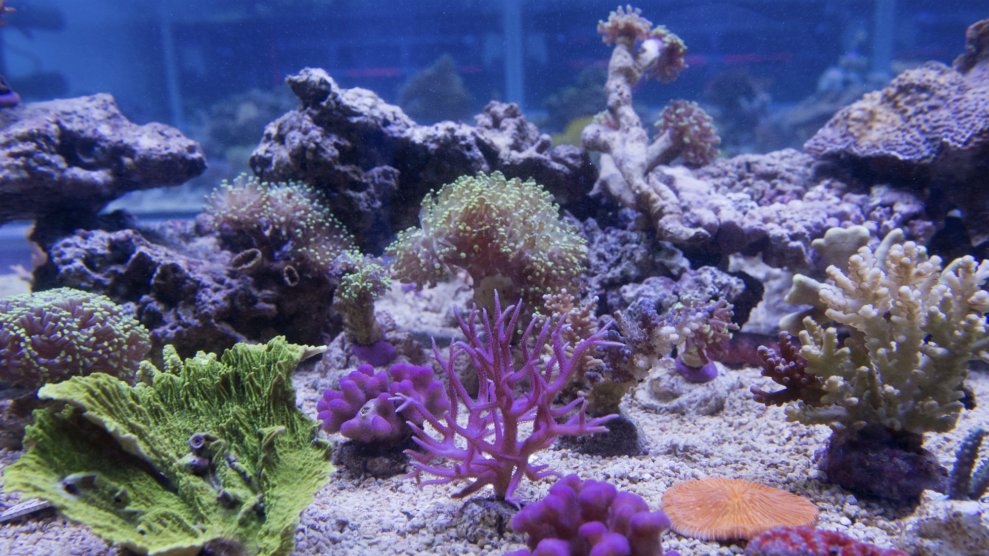 As the research vessel Atlantis made its way out to sea from Woods Hole, Massachusetts, last week, expedition chief scientist Erik Cordes predicted the team would discover something no one has ever seen before. It didn’t take long.

Some 160 miles off the coast of Charleston, South Carolina, a half mile below the ocean surface, is a dense forest of cold water corals. And based on their observations and recent sonar mapping of the ocean floor, researchers estimate that the reef runs for at least 85 linear miles.

“This is a huge feature,” Cordes said. “It’s incredible that it stayed hidden off the US East Coast for so long.”

The existence of the reef was confirmed during a pair of submersible dives this week that were part of a two-week expedition to explore uncharted canyons, gas seeps and coral ecosystems off the Atlantic coast. The discovery builds upon research this summer by scientists working aboard the Okeanos Explorer, a National Oceanic and Atmospheric Administration ship.

As Cordes readied to board the famous deep-sea submersible Alvin on Thursday morning, he said he was excited to get a first look at a site called Richardson Ridge. There was no telling what might be found, but his hope and goal was to find and collect corals. Seven hours later, Cordes, coral scientist Cathy McFadden, and Alvin pilot Bruce Strickrott returned to the surface with the front end of the submersible loaded with Lophelia pertusa, a stony coral species, and a variety of other hard and soft corals.

Cordes, a deep-sea ecologist and professor at Temple University, called it an “unbelievable” ecosystem unlike anything he has seen before. He has done a lot of work in the Gulf of Mexico, where Lophelia are also common. But unlike in the Gulf, finding colonies in this part of the Atlantic proved easy.

“Just mountains of it,” Cordes said as a crew worked to secure Alvin back on the ship’s deck. “We couldn’t find a place that didn’t have corals.”

This summer, scientists aboard Okeanos mapped hundreds of deep-sea mounds and found coral approximately 16 miles southeast of the recent dive sites. Cordes and his team have confirmed that  the mounds mapped by Okeanos are indeed teeming with coral.

The live corals are growing atop giant mounds of rubble, the skeletal remains of coral colonies that have been growing in the same area for millennia. Cordes expects these Atlantic coral structures could be hundreds of thousands of years old.

Sandra Brooke, a coral ecologist at Florida State University, was among the research team members who dove Friday to a site approximately 1.5 miles from Thursday’s study area. There, they found more of the same: thriving ghost white Lophelia covering the sea floor in every direction. Brooke told HuffPost it was an “incredible” surprise to find so much live coral at this depth and so far from the coast.

“It’s kind of thrown my mental image of what the reefs out here look like for a loop,” she said.

The ongoing project, named Deep Search, comes as the Trump administration is proposing a sweeping offshore drilling plan that, if approved, would open huge swaths of the Atlantic, Arctic, and Pacific oceans to oil exploration.

Cordes said the goal of the expedition, which is funded by the NOAA, Bureau of Ocean Energy Management and US Geological Survey, is to identify and ultimately safeguard sensitive habitats in a swath of ocean that remains largely unexplored. For the last week, the team of scientists has been working late into the night, conducting experiments, preserving corals and other species for future testing, and analyzing mud and water samples.

Cordes said Saturday that this complex and diverse coral habitat must be protected from oil and gas development. He also has little doubt that it is critical for the productivity of regional fisheries. During his cruise Thursday, cameras attached to Alvin captured footage of a large swordfish cruising over a field of Lophelia corals.

“It doesn’t get more direct than that,” Cordes said. “There’s a reason they’re down there.”

Cordes says he plans to publish a paper about the team’s discovery. The 85 linear miles of reef his team identified includes the coral habitat discovered by scientists aboard Okeanos.