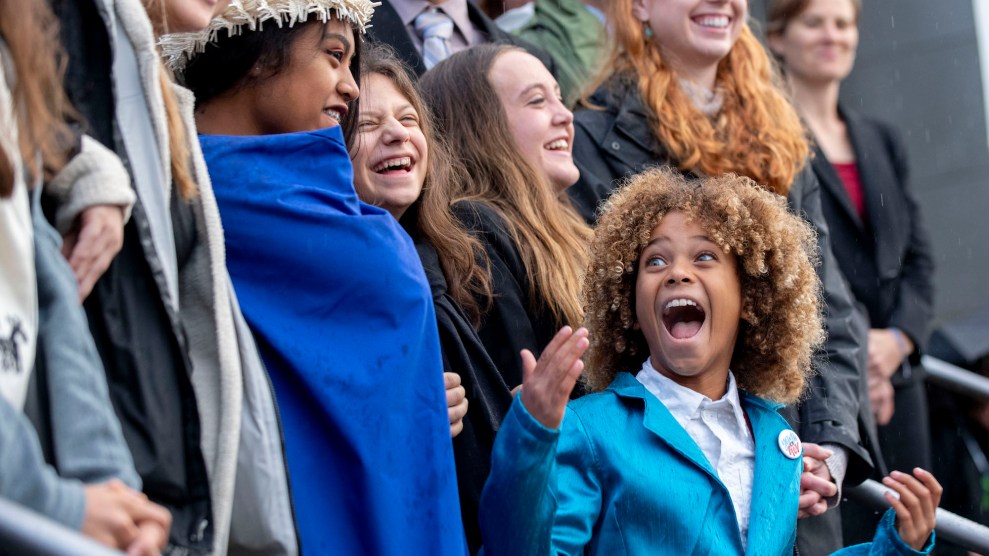 Plaintiffs in the climate change lawsuit rally outside the federal courthouse in Eugene, Oregon on October 29. Robin Loznak/ZUMA

For the second time in just over three months, the Supreme Court has rejected the Trump administration’s effort to delay a climate change lawsuit led by 21 young plaintiffs. The lawsuit, Juliana v. US, which alleges that the federal government created a national energy system that causes climate change—therefore depriving the plaintiffs of their constitutional rights, will proceed after a new trial date is set.

On Friday, the Supreme Court issued an order denying an earlier stay, although it noted that the administration may still have grounds to take its arguments to stop the case to the San Francisco-based 9th US Circuit Court of Appeals. At the end of the three-page order, Justices Clarence Thomas and Neil Gorsuch both indicated they would have granted the government’s request for a stay, which would have effectively halted the case. Hours after the court issued its order, the plaintiffs requested a status conference to decide on a new date for the trial.

On October 19, Chief Justice John Roberts had issued an order to stay the proceedings pending the plaintiffs’ response to the government’s request to narrow the case. The plaintiffs filed a 103-page response shortly a few days later, in which they argued that their “case involves claims for infringement of their fundamental rights not to be deprived of their personal security and family autonomy, as well as specific and systemic government discrimination against them as a class in violation of their right to equal protection under the law,” according to a press release from Our Children’s Trust, a nonprofit supporting the plaintiffs.

On Monday, when the trial was originally slated to begin, the plaintiffs, ages 11 to 22, joined hundreds of activists in a protest in support of the lawsuit in Eugene, Oregon. Native Americans, activists, and religious leaders spoke at the rally, their words broadcast by bicycle-powered speakers.

The case got its start in 2015, when Julia Olson, an attorney from Eugene, gathered young climate advocates and additional attorneys to file the suit against the government. Since inheriting the case, President Donald Trump’s administration has made several attempts to stop it. “These young people deserve [the] chance to present their case against those who govern and let the light fall where it may,” Olson said in a press release last week.