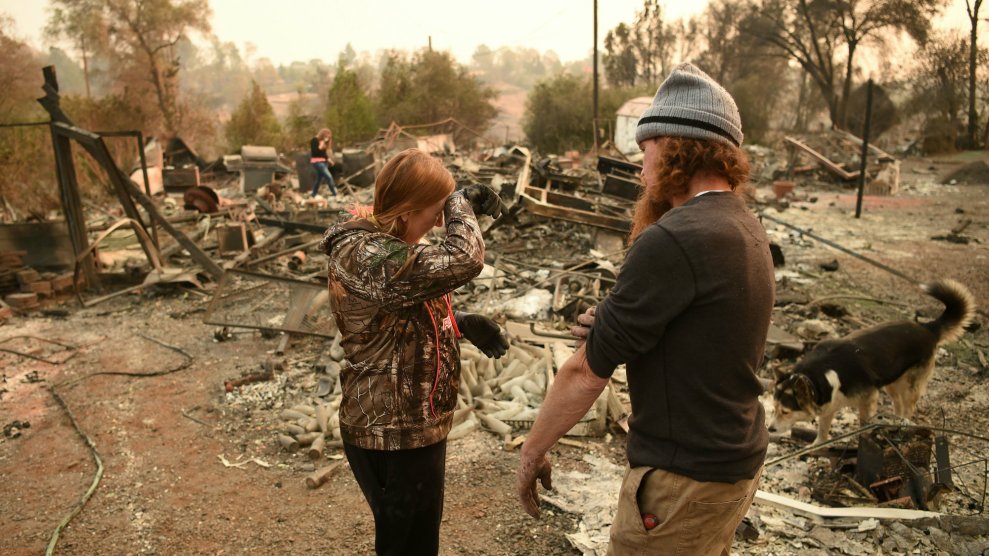 A couple search through the ashes of their burned home in Paradise, California.Josh Edelson/AFP/Getty Images

California’s recent wildfires have been the deadliest in the state’s history. In northern California’s Butte County, at least 79 people have been killed in the Camp Fire, while nearly a thousand people remain missing. Authorities are still working to contain the flames, which have already devastated more than 150,000 acres of land and wiped out most of the town of Paradise. In southern California, the Woolsey Fire has claimed three lives and forced many residents to evacuate their homes.

Though both fires should be contained by the end of November, according to authorities, it will likely take far longer for the victims to fully recover. As the San Francisco Chronicle reports, residents of Paradise, many of whom are elderly, may face long-term displacement as they struggle to find new homes in an area where housing is already scarce.

The fires are the latest in a string of increasingly deadly wildfires in recent months. And scientists fear the situation may only get worse—some of the largest fires in the state’s history, including the Camp Fire, have taken place during the past three years.

As we continue reporting on the wildfires, we want to hear from you: How have the recent wildfires affected you? And how has your outlook on life in California changed? If you have been directly affected, or know someone who has been affected, please get in touch. You can fill out the form below, send us an email at talk@motherjones.com, or leave us a voicemail at (510) 519-MOJO. We may use some of your responses for a follow-up story.