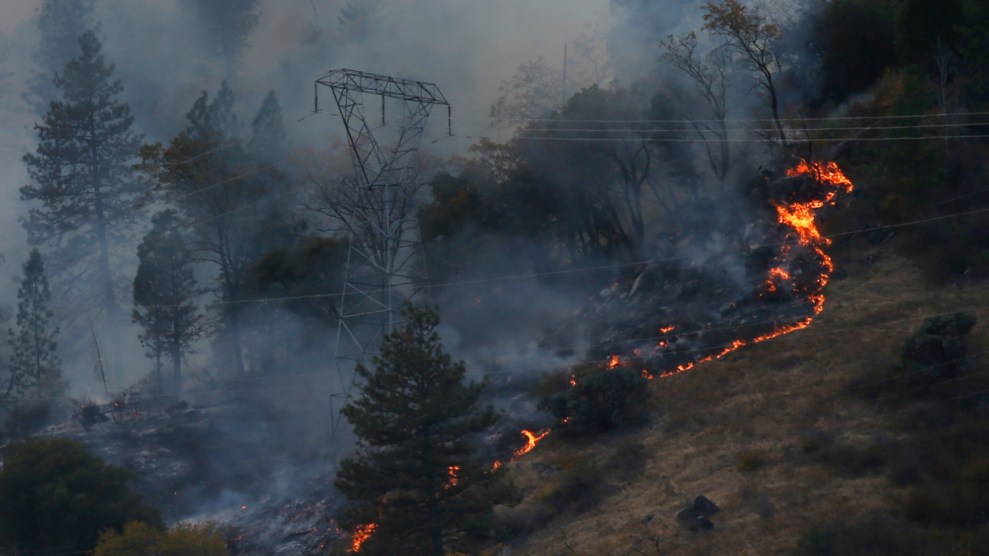 The fires that raged through California in November, killing dozens and resulting in massive damage to property and wildlife, continue to have lasting effects on the state. On January 14, Pacific Gas and Electric, California’s biggest utility, announced that it will file for Chapter 11 bankruptcy because of its role in the recent disasters. The power behemoth has been blamed for several large fires that burned in 2017 and 2018, when trees fell on the company’s power lines and ignited; on the morning that the huge Camp Fire started, a PG&E power line was experiencing outages near where the fire began. According to a filing with the Securities and Exchange Commission, PG&E anticipates that it could be held liable for up to $30 billion in damages, not including future claims—an amount more than 20 times the company’s wildfire insurance coverage in 2018. On Tuesday, the company secured $5.5 billion in credit to continue its operations while it goes through the bankruptcy process.

The years following the bankruptcy will likely be marked by a messy battle between creditors looking for a payoff and fire victims looking for justice and compensation. The bankruptcy will have other far-reaching effects: PG&E is one of California’s biggest investors in energy-efficiency initiatives, including its goal to make all electricity emissions-free by 2045 and its push to install more solar panels. In 2017, about 80 percent of PG&E’s power came from renewable and greenhouse-gas-free sources, and it invests close to $1 billion every year in energy-efficiency initiatives, like incentivizing customers to use renewables by giving them discounts. And this is only the start: Natural disasters like the California fires are only going to be more commonplace as the threat of climate change continues to rise, and someone—whether that’s utility companies like PG&E, the state, or taxpayers—is going to have to deal with the fallout.

As Severin Borenstein, faculty director at the University of California-Berkeley’s Hass School of Business Energy Institute, explains, once PG&E officially files Chapter 11, the company will be assigned a bankruptcy judge whose job is to ensure that everyone owed money by PG&E gets paid as quickly as possible—meaning that the clean-energy initiatives the state relies on the company to support might be left behind. Mother Jones talked to Borenstein about what PG&E’s woes mean for Californians, energy efficiency, and our rapidly warming world.

Mother Jones: PG&E is one of California’s biggest investors in energy efficiency. How is its bankruptcy going to impact the state’s climate goals?

Severin Borenstein: It will be harder to continue to make these public policy investments through the utilities if the utility is being run by a bankruptcy judge who is not interested in fighting climate change decades from now. Bankruptcy is really messy, and it’s even messier with a regulated utility, because there were already two entities co-managing the firm—the regulator, which is the California Public Utilities Commission, and the management of the company. So now there’s going to be a third entity, a bankruptcy judge, and they all have different goals. And that is why all of us who work in energy policy did not want to see this happen, because it is going to make it difficult for the utility to continue to pursue a lot of state goals that are really important goals for the planet. That tension is going to really be front and center.

MJ: Before it announced it was going to declare bankruptcy, PG&E was under pressure to improve its fire prevention efforts. Gov. Gavin Newsom said a week before PG&E announced its bankruptcy that he plans to increase state funding for wildfire safety by $105 million. What’s going to happen to PG&E’s commitments?

SB: I’m not sure. I think it will be more difficult to pursue those sorts of preventive initiatives through the utility because of the bankruptcy judge having different priorities. It’s possible some of those initiatives will be just taken out of the utilities and done directly by the state. But frankly, I don’t know. That’s going to be a political negotiation, as well as a negotiation through the bankruptcy court.

MJ: How is PG&E’s bankruptcy going to impact Californians in the short term?

SB: PG&E is not losing money every day as they were back in 2001 [when it filed for bankruptcy during the California energy crisis]. No one is suggesting that they will be unable to pay their suppliers or that the power will be shut off or anything like that. And for that reason, in the short run, consumers would see little or no impact, both on service levels and on their rates. I think it’s very unlikely that we’re going to see anything like 2001, where we had rolling blackouts and real concerns about meeting the day-to-day electricity load. And, since I’ve been asked this, you still have to pay your electric bill.

MJ: What is this going to look like for PG&E in the long term?

SB: In the very long run, we’re talking about reorganization of the company in a way that is probably more extreme than we typically see, and certainly more extreme than what we saw back in 2001. In 2001, the company went into bankruptcy, but they came out as essentially the same company. It’s very likely that won’t happen this time. There is a lot of discussion among regulators, among the Legislature, and even in the company of breaking up pieces of the company—of possibly selling off the gas business as a separate utility, of possibly breaking up the electric business into regional utilities, and then also possibly taking some of those utilities and making them public utilities instead of investor-owned utilities. PG&E would probably be [broken up into] less than 10 utilities, but they would be government-owned. So that would be an extremely complicated process. This bankruptcy will take years, but that would make it take even longer. It may be the right answer ultimately, but it’s going to be really complicated.

MJ: You say that splitting up PG&E is a potential solution to its financial woes. Can California do anything to make sure a future utility crisis doesn’t put clean energy goals at risk?

SB: There are things the state can do. One of them, which we should have been considering already, is to take a lot of these policies out of the utilities. For instance: We run energy-efficiency programs through the utility. Lots of other states, New York, Oregon, and some other places, don’t. They charge a little tax on electricity, and they use that money to run a state agency that does all the energy-efficiency programs. If the utility goes into bankruptcy, they are at a significant disadvantage in being the vehicle for these sorts of public policy programs.

MJ: San Francisco Mayor London Breed has brought up the possibility of having San Francisco take over some of PG&E’s operations. Is that a good idea?

SB: To be honest, I think San Francisco would not be the ideal boundary. We probably don’t want to do it city by city, because that’s going to be a whole lot of utilities and somebody still has to own and manage the long-distance transmission lines. But I definitely think it’s something that should be considered. Does it make more sense to have government run the utilities? I’m not sure. There are definitely people who are now saying, “Oh, we should just have the government run it.” And those people seem to have never stood in line at a DMV. If a city were suddenly faced with the liability from wildfires like PG&E is, it would very likely drive that city into bankruptcy. So it’s not like cities are so big that they wouldn’t have a problem handling these liabilities. There is no easy answer to this sort of liability, because fundamentally, this is a loss to society. You can’t just say somebody will pay for it. It’s going to take real resources. And whether that’s the state or cities or shareholders, somebody is going to take a huge hit.

MJ: Obviously, climate change is not slowing down anytime soon. These extreme weather events will only become more common. Is what’s happening with PG&E a precursor to what could happen with other utility companies?

SB: California has been on the leading edge of renewables policy and fighting climate change. Unfortunately, California is now going to be on the bleeding edge of adaptation and dealing with the impacts of climate change, because what we have seen with PG&E is likely to play out in different areas for different utilities and other sorts of entities. As climate change causes sea level rise, droughts, flooding, all of those things are going to become more prevalent. So when those bad things happen, someone is accused of not having taken sufficient care. We’re going to see that play out in lots of areas as the extreme events of climate change become more common. PG&E and California are just on the front end of that.