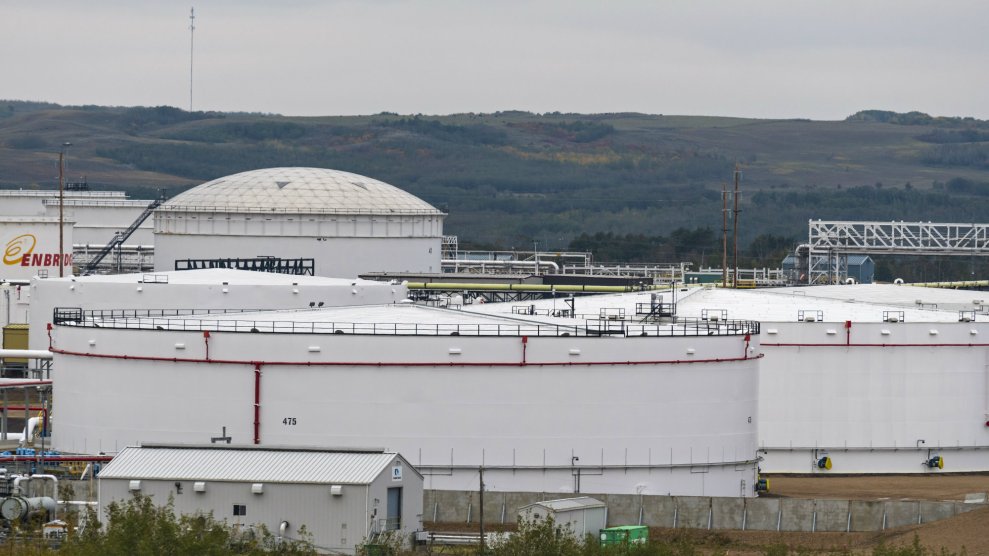 This story was originally published by National Observer. It appears here as part of the Climate Desk collaboration.

A surge in US and Canadian oil production over the last decade has added the equivalent of “one Russia or one Saudi Arabia” to the markets—pushing the planet farther away from ever getting a grip on the pollution that is driving climate change.

Fatih Birol, the executive director of the International Energy Agency, revealed this fact Feb. 26 while discussing what he saw as a “growing disconnect” between the countless scientific studies calling for a decline in heat-trapping greenhouse gas emissions—each more urgent than the last—and the fact that pollution continues to rise, hitting a record high last year.

In order to avoid the extreme flooding, drought, heat waves, rainfall, disease outbreaks and other dangers to human health that climate change will provoke, nations must stop burning fossil fuels in sufficient amounts to limit the rise in average surface temperature to below two degrees Celsius over pre-industrial levels.

The problem, said Birol, is that there is already no more room to increase the amount of pollution that humans add each year to the atmosphere. All of the cars, trucks, power plants, factories and other facilities that have already been built around the world, he said, will eat up the rest of the planet’s so-called “carbon budget”—an expression used to describe the maximum amount of pollution that could be generated if the planet wants to limit the rise of average global temperatures—by 2045.

Canada has committed to investing billions of dollars over the next several years in clean technology that Birol said can take a big bite out of oil demand. For example, the Trudeau government is investing in a national network of electric-charging stations to help precipitate a flood of electric car sales in the 2020s.

The government is also establishing a nationwide price on pollution and is phasing out emissions from coal-fired power generation through regulations by 2030. It is working to expand an international coalition to follow them as rapidly as possible.

Those waiting in the wings to take power in Canada promise even more fossil fuel exploitation. Official Opposition Conservative leader Andrew Scheer has referred to Canada’s oil as the “cleanest” energy in the world, and continues to do so despite petroleum needing to be kept in the ground to keep global warming in check.

The Liberal government does not see a contradiction in all its efforts. It says decarbonization won’t happen overnight, and needs to be encouraged over several years, with the energy sector continuing to receive support in the interim. It sees lower-carbon shifts, such as from diesel to natural gas, as better than doing nothing.

Even so, a report from the International Institute for Sustainable Development describes how clean tech companies in Canada are facing challenges competing on a level playing field with the financially powerful oil and gas sector.

Sohi told National Observer in an interview that a lot of clean tech innovation in Canada relates to the natural resources sector itself, so he saw these developments as not actually “working against each other.”

“You need to basically look at it in a holistic way,” said Sohi. “I think that’s what we are focused on. We are supporting a lot of investment in new technology.”

“Full impact” of oil surge not yet felt

During an Ottawa speech alongside the minister and University of Ottawa professor Monica Gattinger, Birol laid out a stark assessment of the planet’s energy picture, and the uphill battle facing nations in cutting their carbon emissions.

Oil production in North America has more than doubled since 2009, despite Canada promosing to cut its carbon emissions since the 1990s. A decade ago, Birol said, US and Canada together produced roughly 10 million barrels per day of oil, and today that number is roughly 22 million.

The increase in production alone is equal to “one Russia or one Saudi Arabia” in additional output, he said, and an increase in natural gas is a “similar story.”

“I believe the full impact of the North American oil and gas surge has not been felt yet” in terms of energy markets and petro-politics.

“I believe the full impact of the North American oil and gas surge has not been felt yet” in terms of energy markets and petro-politics, said Birol.

In addition, a deluge of new coal power plants that have been built in India, Indonesia and Philippines over the last decade are expected to last another 40 years without intervention, he said, and are already responsible for a third of global carbon emissions.

While coal plants in North America and Europe are typically close to retirement, he said newer plants in Asia aren’t disappearing anytime soon.

This year’s Climatescope survey by BloombergNEF of 103 nations similarly warned that around 86 percent of coal-fired generation under construction is due to come online in the next several years in China, Indonesia, India and South Africa.

But for Birol, an important aspect of the climate change debate is getting overlooked: how current facilities are already clogging up our atmosphere.

“Leave aside for a moment what we are going to build that’s new,” he said. “I asked my colleagues, can you please calculate in the next 25 years, how much emissions will come from existing power plants, existing industrial facilities, existing cars and trucks, throughout their economic lifetime? The answer, ladies and gentlemen, was very depressing.”

A full 95 per cent of the planet’s remaining carbon budget will be eaten up by existing infrastructure, he said.

“We have no room to maneuver, in other words. If we want to be in line with the Paris target, we wouldn’t build any non-zero carbon plants, no new cars, no new factories—and all the ones we have, we shut them down. So of course, that’s practically impossible.”

Getting clean tech off the ground

Most of the world’s nations, including Canada, have committed to the Paris Agreement goal of keeping the global average temperature increase to well below two degrees Celsius.

The agreement allows for each country to come up with their own nationally-determined contributions. Canada’s current target is to cut 30 per cent of its emissions below 2005 levels by 2030.

However, each nation’s commitments, added up, are insufficient to keep warming under two degrees, according to the United Nations. The UN’s environment program reported in November that they would result in roughly three degrees of warming by 2100.

And that even assumes countries will be able to meet their own promised targets. Canada, for example, will fall short of its target unless it can close a gap of 79 million tons of carbon pollution.

Environment and Climate Change Minister Catherine McKenna said in December that she is banking on future technologies, increased use of public transit and future efforts of provinces and territories to close that gap.

Relying on future technology is not entirely pie-in-the-sky thinking. Birol said global electricity demand is growing twice as fast as global energy demand, suggesting the electrification of economies, as a result of digitization and an increasing share of renewables like solar and wind power.

Last year, solar was the largest growing power sector source in the world. Costs have plummeted and many governments are encouraging solar energy adoption. The developing world, in fact, is now deploying more renewables than developed nations. “We are going to see a big role for solar in the years to come,” Birol predicted.

The US $1.1 trillion global low-carbon economy is growing overall, with compound annual growth of four per cent from 2008 to 2015, the IISD reported. But its January report by economist Céline Bak referred to “market failures” in getting clean tech off the ground in Canada.

“Evidence shows that Canada’s array of low-carbon innovation policies can seed a vast nursery of potential trees, and yet few strong oaks have yet emerged,” she wrote.

“Emerging firms are struggling to operate in the low-carbon economy, where prices for the commodities they replace—including energy derived from oil and gas—are volatile and where prices for the pollution they address—such as carbon—remain low and are also subject to volatility.”

Sohi disagreed that clean tech and oil and gas were at loggerheads in the markets.

“I think that the kind of innovation and investment in new technology, or development of new technology that has happened in Canada, a lot of that actually relates to the natural resources sector—the oil and gas sector, the forestry sector or the mining sector,” he said.

“Clean tech is growing, and we will continue to support it.”

“Clean tech is growing, and we will continue to support it,” added the minister. “We are investing in products that allow the testing of solar panels that capture energy on both sides…a project in Halifax that is investing in technologies in tidal power…in Regina that is investing in geothermal….in BC that is testing tech around autonomous vehicles.

“Yes, those technologies take time to be developed, then commercialized, then put into use. I think we are doing whatever we can—and we are doing a lot of investment into fundamental sciences.”

He also referred to the government’s commitment to phasing out inefficient fossil fuel subsidies by 2025. National Observer reported in February on a letter sent to an Ottawa-based organization that suggested the government was still working on identifying certain subsidies years into its effort.

A key low-carbon transformation is electric vehicles. All the cars in the world consume a fifth of global oil production, so electrification can take a serious bite out of fossil fuels, as long as they’re charged from non-emitting power sources like renewables, hydro or nuclear. In Canada, over four-fifths of the electrical grid is already non-emitting.

“We made a commitment to create more electric vehicle charging infrastructure across the country, and we have a plan in place,” said Sohi.

In January, National Observer reported that 45 per cent of the funding in a program that had been described as a boon for electric vehicles, was actually going towards natural gas refueling stations.

Electric vehicle advocates said at the time that they felt slighted that the program wasn’t advancing the cause of electrification as much as it could.

Under the program, the electric vehicle charging stations have cost about $50,000 to install, making them much cheaper than natural gas stations which cost around $1 million each.

Departmental officials stress that the program, funded by the 2016 and 2017 federal budgets, is intended to be a six-year, $182 million undertaking and the government is still in the process of rolling out new applicants.

The $6.5 million that had been given out for natural gas refueling by the end of January already represented a large portion of the $22 million overall that is being allocated to natural gas, they say.

That means that, assuming the program survives federal budget cuts over its six-year lifetime, much more money will end up flowing to zero-emission stations like electric chargers and hydrogen refueling than to natural gas.

“You will see how we are supporting electric vehicle charging infrastructure. We have a process in place, and our department reviews those applications.”