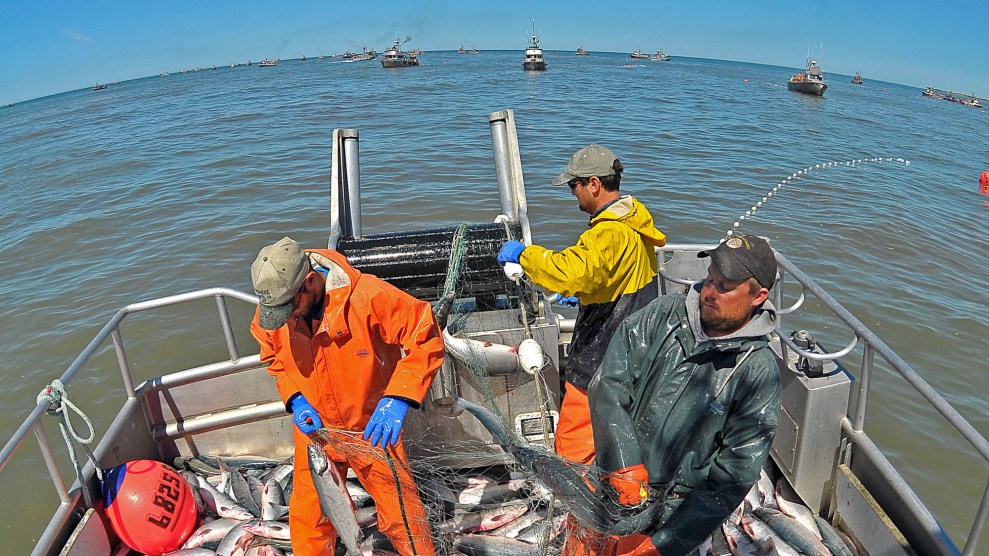 The war over America’s most productive wild salmon fishery, in Alaska’s Bristol Bay, has been brewing for nearly 40 years. Now, the Trump administration appears to be intervening on behalf of the mining industry—which is bad news for the salmon and the people who depend on them.

Forty million salmon migrate into the pristine bay each summer.

On one side is Northern Dynasty Minerals Ltd., a Canadian mining company eyeing a deposit of millions of tons of gold, copper, and molybdenum ore located near the headwaters of two rivers that drain into Bristol Bay, in southwest Alaska.* In its way stand conservationists, Alaska Natives, and fishing operators, who say the company’s proposed Pebble Mine could contaminate the two river systems, endangering the ecosystem for the 40 million salmon that migrate into the pristine bay each summer.

The public has until July 1 to comment on the US Army Corps of Engineers’ environmental impact statement issued for Northern Dynasty’s mining project. The United Tribes of Bristol, a consortium of 15 tribes in the Bristol Bay Area, released a statement calling the assessment “completely inadequate,” and said that it “ignores the many valid concerns about the devastating impacts this project will bring.” The American Fisheries Society, a group of more than 8,000 scientists and academics, wrote in its public comment that the Army Corp’s evaluation “fails to meet basic standards of scientific rigor,” underestimating impacts and risks to fish and their habitats while drawing conclusions unsupported by data or other evidence.

This Monday, July 1, is the last day to use your voice to stop toxic mining in Bristol Bay, Alaska. Submit your comment and #SaveBristolBay: https://t.co/PGpXrsxdFN. Photo by Ben Knight. pic.twitter.com/FwJQ2hi57y

As Paul Greenberg wrote for Mother Jones last year, battles over the fate of Bristol Bay have escalated in the last decade, after opponents of the mine convinced the Obama Administration to propose environmental restrictions under the Federal Clean Water Act that blocked the project from moving forward. So began a conflict between the mining project’s backers—supported by conservative and business groups like Grover Norquist’s Americans for Tax Reform and the Koch brothers’ Americans for Prosperity, according to Bloomberg—and the Environmental Protection Agency.

“Any mining projects in the region likely pose a risk to the abundant natural resources that exist there,” Pruitt said in 2018.

The EPA appeared to stand against the project even after the election of President Donald Trump; former EPA administrator Scott Pruitt—widely seen as a friend to industry—issued a statement defending Bristol Bay in January 2018: “It is my judgment at this time that any mining projects in the region likely pose a risk to the abundant natural resources that exist there. Until we know the full extent of that risk, those natural resources and world-class fisheries deserve the utmost protection.”

But this week, in an apparent reversal, the agency announced it would resume an evaluation of its own proposed environmental restrictions—a necessary first step to lifting the barriers stalling the mining project since the Obama administration.

In the meantime, Northern Dynasty is well on its way toward securing its necessary permit from the US Army Corps of Engineers to start mining. Since December 2017, the Army Corp has entertained the mining proposal despite the EPA’s position against it—studying the plans, drafting its environmental impact statement, and collecting public comments.

The outcome of this convoluted regulatory battle has high stakes not just for environmentalists, but also for the region’s lucrative fisheries. As Greenberg wrote last year:

The sockeye salmon migration into Bristol Bay, Alaska, can exceed 40 million fish. As they charge into the Kvichak and Nushagak rivers and fan out across myriad tributaries, the sockeye and four other species of Pacific salmon are pursued by commercial and sport fisheries valued at over half a billion dollars. When they reach the region’s clear, wild headwaters, those millions of salmon spawn and produce billions of offspring that then find their way down into Iliamna, Alaska’s largest lake. Then the fish head out toward the Bering Sea, get big and fat on omega-3-rich krill, and in three more years return to their headwaters to begin the cycle anew. Whether marketed to Americans or exported to other countries, Bristol Bay salmon are a major bulwark against America’s “seafood deficit,” which in 2016 exceeded $14 billion.

*Correction: This sentence was corrected to more accurately reflect estimates of ore deposits in the mine.