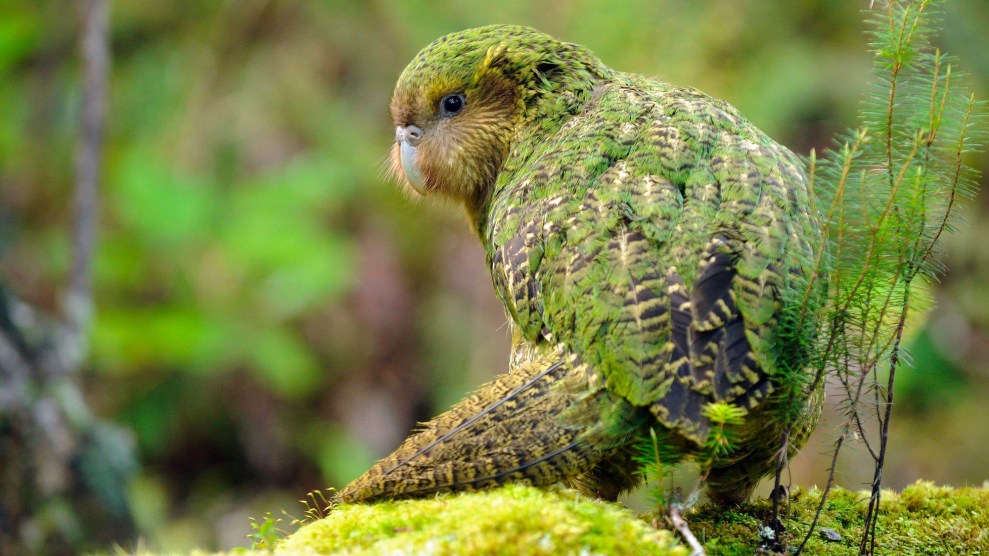 It’s Sunday, and before we begin another long week, we wanted to take a moment to celebrate some good news we discovered after going down a fascinating recent Twitter hole: the kākāpō, the world’s fattest parrot, long on the verge of extinction, is making a glorious comeback.

Fluffy and flightless, these adorable-looking birds are native to New Zealand and evolved without any mammalian predators, which made them particularly horrible at fending off the cats, rats, and stoats that eventually arrived with European settlers in the early 1800s. By 1900, despite a conservation effort launched by the government, only a few kākāpō remained, according to the country’s conservation department.

Want to know more about the world’s weirdest birds? You’ve come to the right place. I show #conservation of #kakapo and #takahe in #NewZealand. Come for the videos; stay for the science! pic.twitter.com/Byt1uvCtix

Starting in the late 1940s, New Zealand launched missions to locate and preserve the birds, but by the 1970s none were thought to exist. Then, in 1977, a large population of about 200 were found in southern Rakiura, but soon they too were attacked by feral cats. Rats kept eating the baby kākāpō, and by 1995 there were only 51 of the birds left.

The next year, the Kākāpō Recovery Program was launched to keep the parrots from teetering closer toward extinction. It’s a difficult goal, partly because the kākāpō only breed when rimu trees, which produce berries, are full of fruit, which doesn’t happen every year.

The team even created a helmet that could collect parrot semen, an experiment that ultimately failed to boost the population.

And so the recovery team has gone to creative lengths to help them mate: After a kākāpō named Sirocco went viral for attempting to have sex with a zoologist’s head, the team even created a helmet that could collect semen, an experiment that failed to boost the population but successfully garnered more social media buzz around the birds.

In recent years, the number of kākāpō has increased, but they aren’t out of the woods yet: This year they’ve been battling a fatal fungal disease that had killed at least seven as of June, and 36 more (about a fifth of the population) were sent to veterinary hospitals for evaluation.

But the birds are fighters, and this weekend they hit an important milestone: Andrew Digby, a scientific adviser for the recovery effort, tweeted that there are now 200 kākāpō, after the latest chick became a juvenile, old enough to officially be counted.

“There are probably more kākāpō alive now than at any time for ≥70 years,” he wrote. To celebrate the occasion, enjoy this video of Sirocco getting wild, and other cute photos of kākāpō young and old.

200 #kakapo! The population has reached 200 today, with the latest chick (Esperance-3-B-19) becoming a juvenile – when we add birds to the official tally. There are probably more kākāpō alive now than at any time for ≥70 years. #kakapo2019 #conservation pic:@deidre_vercoe pic.twitter.com/7mWMJcSExv

It's been a long journey for Pearl-2-B-19, like all of the #kakapo chicks. Here she is in a tent before transfer to Alice's nest back in late February. #kakapo2019 #conservation pic.twitter.com/jubiPvAj9e