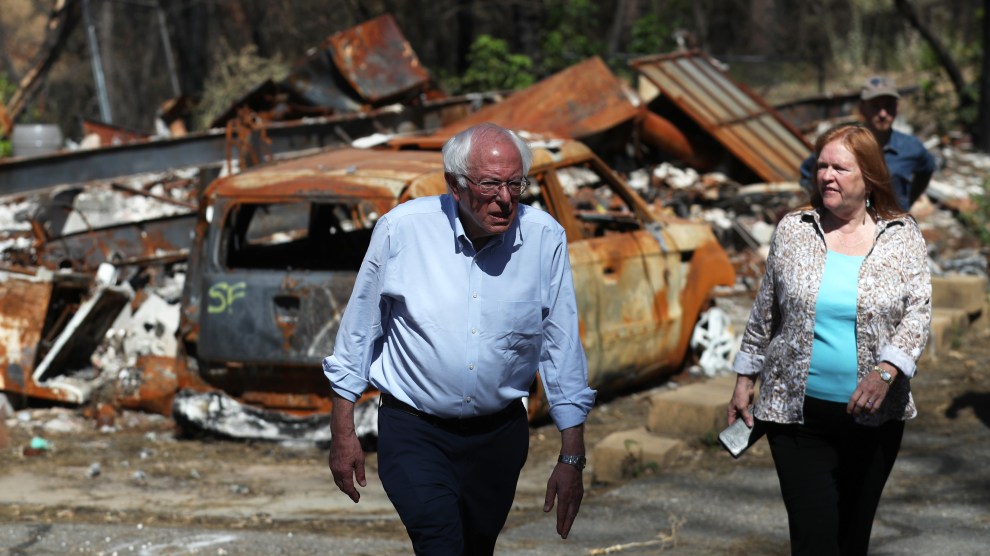 What’s your plan? How much will it cost? Where will the money go? Which regions require the most aid? These are questions that politicians across the political spectrum will need to answer when it comes to climate change, one of the most defining issues not only for the 2020 election but for the future of the planet.

That’s why the Weather Channel, Mother Jones, and Climate Desk have teamed up: to have thoughtful conversations with 2020 hopefuls from both parties, to see up close places across the country that have been affected by extreme weather, and to discuss policy proposals and personal insights about the climate crisis. The result is a one-hour special, “2020: Race to Save the Planet,” which airs on Thursday, November 7 at 8 pm ET.  The Weather Channel’s hurricane expert and broadcast meteorologist Dr. Rick Knabb will host the segment, which will feature five Democrats and three Republicans.

Times have dramatically changed since the last presidential election, when climate change took a back seat to issues like the economy and immigration. But rising awareness of the dangers of climate change combined with heightened concern about the rollbacks of environmental protections under President Donald Trump has turned addressing a warming planet into a top issue for voters in 2020.

“This special is really not intended to be partisan at all.”

“It was so frustrating to cover the 2016 cycle and just wait around hoping candidates would talk about climate change in the debates—and that discussion barely happened,” says Mother Jones environment reporter Rebecca Leber. “Now, we’re in a completely different cycle where everyone has a plan, or multiple plans, to tackle this.”

In this week’s episode of the Mother Jones Podcast, host Jamilah King sits down with Dr. Knabb and Leber to discuss some of the differences among the plans from Kamala Harris, Bernie Sanders, Mark Sanford, and others: How do they intend to support frontline communities and invest in infrastructure? How much will their plans will cost? And how has their own awakening to the importance of the issue taken place?

“This special is really not intended to be partisan at all,” says Dr. Knabb. “It’s really intended to allow candidates from both sides to get their side of the issue out there.”

The candidates acknowledge we’re in a crucial moment—as South Bend Mayor Pete Buttigieg said, “like the moon landing, or the Manhattan Project…this is certainly as urgent, as pressing, as any of those things we’ve taken on before”—but they all have different approaches. Understanding these differences will be crucial to voters who want to go to the polls and make an informed choice. Tune into the podcast for highlights straight from the special, join the discussion on social media with #RaceToSaveThePlanet, and ask Dr. Knabb a question after the podcast on a streaming show on Pattrn.