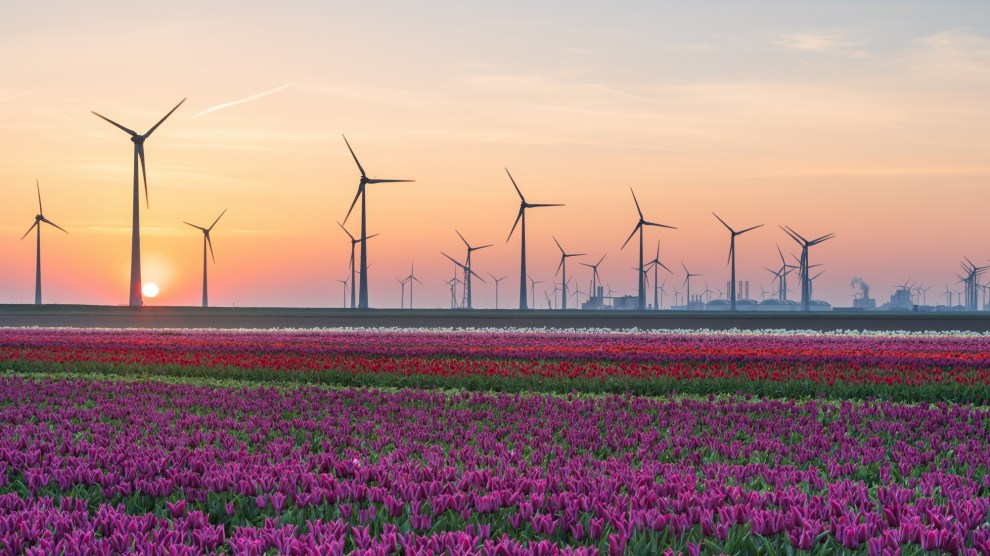 The Netherlands often stop to take selfies in front of one of the country’s more than 1,000 windmills. Afterward, they might taste one of the many varieties of cheese for which the nation is famous. But most are unaware that these two icons of the Netherlands are responsible for causing the nation’s land to sink.

The windmills were used for centuries to drain peatland for cattle grazing and agriculture at large, and that draining—these days done by pumping stations — is causing the land in some places to sink at an average rate of 8 millimeters per year, or about one-third of an inch. (In some areas, researchers put that number higher, at several centimeters per year.)

This subsidence means that in a low-lying nation famous for engineering its way around rising seas, the ground is also sinking lower, creating huge problems for the structures built on top. At a certain point, building foundations begin to crack, sinkholes appear, roads destabilize, and the risk of flooding increases. More construction results in more pressing down of the peat — and more subsidence.

A 2016 report from the PBL Netherlands Environmental Assessment Agency, a research group that advises the government, estimated that the total damage to the country’s buildings and infrastructure from subsidence, as well as the cost to restore weak foundations, could top $22 billion, or 20 billion euros, by 2050.

What’s worse, the sinking may actually be contributing to climate change: A drop in the peat soil of just one centimeter results in the emission of about 9 tons of carbon dioxide per acre, says Gert Jan van den Born, a policy researcher at PBL. That accounts for a large part of overall CO2 emissions in the agricultural sector.

At the moment, however, it is unclear which government agency is responsible for preventing further subsidence. “We don’t know who takes the lead,” says van den Born, noting that the Ministry of Agriculture, Nature, and Food Quality has more recently begun taking responsibility.

Martine Coevert bought her first apartment in 2010 in the port city of Rotterdam, which is sinking 1 to 1.5 centimeters per year according to the city. A year after she moved in, a neighbor made an off-hand remark about having issues with his foundation, and she decided to look into the problem.

Once she convinced her neighbor to pay for a consultation, the contractor discovered the entire block would need to be reinforced within the next two years. “Some of my neighbors hated me,” says Coevert. Some of the houses needed entirely new foundations, and the project ended up costing $1.3 million at current exchange rates. Coevert herself owed approximately $52,000, none of which was covered by insurance.

Halfway into fixing the problems in Coevert’s neighborhood, they learned the local government had adapted a loan program, requiring stricter terms for the homeowners to reinforce their foundations. Partly in response to Coevert’s advocacy, the government temporarily reinstated more favorable terms for the loan program. Otherwise, she and many of her neighbors would have had to directly foot the bill. “If people may no longer live in their house due to safety reasons, they still have to pay their mortgage,” she says.

It is unclear which government agency is responsible for preventing further subsidence.

Now working on land subsidence issues for the city, Coevert says “there are around 20,000 houses in Rotterdam that will likely need this work done in the next 10 to 15 years.” Costs can reach as high as $111,000, per home.

Older houses are especially vulnerable. Many buildings constructed before 1975 were built on wooden pilings beneath their brick foundations. If those pilings become exposed to air, they rot. “Many houses, especially those in city centers, were even built before 1800,” says Hilde Niezen, an alderman in Gouda, a city of 70,000 people in the center of the country that is facing one of the worst sinking rates.

And the damage isn’t limited to homes and other buildings. In Vondelpark — Amsterdam’s answer to Central Park — municipal government workers measure tipping trees every day to predict when they are going to fall over as a result of sinking and rotting, says Geerten Kalter, a tree expert. To help prevent damage, new trees get foundations. He says that requires digging out a 13-by-13-foot ditch, putting in posts, and making a platform. “Then you can plant the tree on top,” he says.

THE NETHERLANDS USED to be mostly soft peatland, with higher grounds as the only habitable places. Around 500 B.C., inhabitants began constructing artificial hills, called terpen, which allowed the population to grow and settlements to become more permanent. That, in turn, led to an increase in demand for land.

Since about one-third of the country is below sea level, the Dutch soon began to construct dikes, or low walls, to protect crops from flooding. The dikes eventually grew larger and more elaborate, and were increasingly used to push back the sea. By 1250, the country had created a connected system of sea and river dikes.

To provide the agriculture needed to support a larger population, the Dutch created ditches to drain water from the peatland, and windmills were built to drain large tracts of land for cattle grazing and planting. In 1986, they created an entire province after spending decades reclaiming land from a lake.

Over time, the Dutch have developed a sophisticated water management system to which the rest of the world regularly turns to address similar issues in their own countries. But while the system keeps Dutch feet dry, as the local saying goes, there has been much less focus on keeping the land from sinking.

The sinking can occur naturally: Around 0.03 millimeters per year — roughly three times the thickness of a piece of paper — is a normal result of plate movement in most places, according to Gilles Erkens, a senior geologist and subsidence expert at Deltares, a research institute focusing on water management. But human activity can also cause the land to subside. Generally, this occurs for three reasons: extraction of natural resources like water or gas; added weight from the construction of buildings and roads; and ground water drainage, which in the Netherlands exposes the peat to air and causes it to break down through oxidation.

The Dutch have gas fields in the northern part of the country, and gas extraction has been responsible for problems such as earthquakes. As a result, the government has been slowing the rate of extraction and will stop it entirely by 2022.

While the system keeps Dutch feet dry, as the local saying goes, there has been much less focus on keeping the land from sinking.

But the draining, now by pumping stations, is a far bigger factor in subsidence. Only 9 percent of the land is now peat, thanks to agriculture, grazing, and construction. Beneath the peat in much of the country, however, is sand and clay, and while they dry out and compress at a slower rate than peat, over time both will sink as well.

The Dutch aren’t the only ones suffering from the effects of subsidence: New Orleans, for example, faces similar problems, but largescale building only began there around 300 years ago. “The Netherlands has been building here for 1,000 years,” says Niezen. Building on the city hall in Gouda started in 1448.

In addition, the country has one of the highest population densities in Europe. “The western and northern parts of the country are the most susceptible to land subsidence,” says Niezen. The western region is also the most densely populated, with an estimated 9 million people, or more than half the country’s population.

In 1953, the Netherlands experienced a flood that killed more than 1,800 people. That disaster led to the development of the Delta Works, a hugely successful series of national construction projects that created the world’s largest storm barrier.

Floods are catastrophic events that make the evening news and require government inquiries, but the slow drop of the ground level doesn’t draw the same attention. As a result, few people have been aware of the growing crisis, including Niezen, who didn’t give the subsidence problem much thought until she became an alderman.

The lowest point in the country currently sits at nearly 22 feet below sea level. As sea levels rise as a result of climate change, the ground becomes comparatively lower, leaving large areas of the country even more vulnerable to catastrophic flooding. “There’s a limit to how low you can go,” says Niezen.

In June 2018, the Dutch government released a draft climate agreement, as required to meet the goals of the 2016 United Nations Paris Agreement to reduce greenhouse gas emissions. The Dutch agreement aims to reduce CO2 emissions by 49 percent by 2030, compared to 1990 levels.

But so far there has been no concerted nationwide effort to confront the subsidence problem. It’s also unclear who is ultimately responsible. On a national level, at least four ministries are involved. Regionally, water management is controlled by water boards, which are elected bodies. There are 21, grouped by watershed region, and they are responsible for maintaining the waterways, dikes, and wastewater treatment. At the same time, the country’s 12 provinces are responsible for land management and zoning laws. Unsurprisingly, no agency wants to be responsible for footing the bill.

“There’s a limit to how low you can go.”

Last year, the Dutch announced their first overall assessment of the issue. Researchers, including Erkens, will undertake a five-year nationwide study to determine how fast the land is sinking.

In June, the Ministry of Infrastructure and Water Management sent a letter to parliament requesting a “government-wide” approach to the problem. But so far, further action hasn’t been taken.

For Coevert’s part, she is working on creating a national fund to finance the repairs that will be needed as the land continues to drop. The participants include a few of the most impacted cities in the country, as well as national insurance companies and banks.

“In 100 years, sea level rise as a result of climate change is a bigger problem for the Netherlands,” says Erkens. “But for the next 100 years, subsidence is the most urgent danger for the country.”