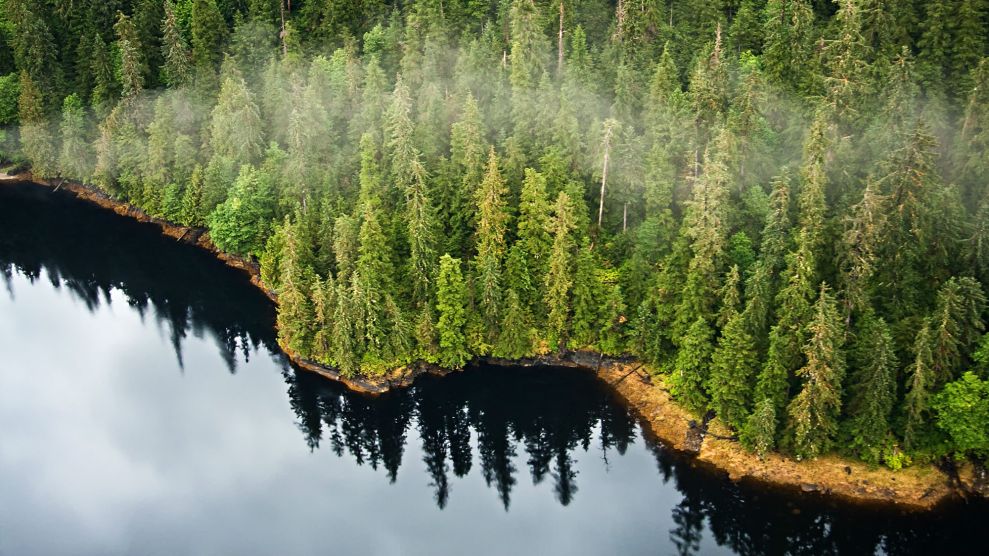 Donald Trump, it turns out, is a fan of trees. A big fan. Such a fan, in fact, that at the World Economic Forum in Davos, Switzerland, late last month, the president announced that the United States will join the One Trillion Tree Initiative, an international plan to plant and restore a trillion trees globally by 2050. Doing so, he said, illustrated the country’s commitment to “conserving the majesty of God’s creation and the natural beauty of our world.” Two weeks later, he again touted the project in his State of the Union speech.

These were odd statements and an even odder policy shift from a man who has pushed for drilling and logging in millions of acres of Alaska’s Tongass National Forest, the United States’ largest national forest; shrunk national monuments; and proposed slashing funding for environmental agencies. Just this past summer, as the Amazon rainforest was burning, Trump failed to support sending $20 million in aid to the region to help fight the fires. (He said his resistance was due to a lack of coordination with Brazilian President Jair Bolsonaro.) Trump has also had personal quibbles with certain trees: He once scoffed at the idea of a Japanese pine tree planted in Central Park in his honor because he thought it was too small. And as president, he allowed an oak tree gifted by French President Emmanuel Macron as a symbol of their countries’ “friendship” to die.

Trump has also had personal quibbles with certain trees: He once scoffed at the idea of a Japanese pine tree planted in Central Park in his honor because he thought it was too small.

In a way, experts tell me, Trump’s apparent commitment to the World Economic Forum’s One Trillion Tree Initiative is welcome news. Trees pull carbon from the atmosphere, lead to better air and water quality, increase property values, and, some studies show, may even reduce crime.

But while we all love trees, a plan to plant a trillion of them is nowhere near sufficient in addressing climate change. So if this is Trump’s plan to address the global climate crisis, it’s a complete cop-out.

“This needs to be, must be, part of a much broader suite of actions,” says Rachel Cleetus, policy director with the Climate and Energy program at the Union of Concerned Scientists. “It’s going to be a drop in the bucket unless we actually are taking ambitious, aggressive near-term efforts to also cut CO2 emissions from our fossil fuel use.”

Basically, planting trees without cutting emissions is like trying to clean up a major oil spill without stopping the leak first. It makes zero sense.

This sentiment was echoed in a New York Times op-ed last week titled “Planting Trees Won’t Save the World.” Three environmental researchers argued that “[f]ocusing on trees as the big solution to climate change is a dangerous diversion. Worse still, it takes attention away from those responsible for the carbon emissions that are pushing us toward disaster.”

The idea to help counter climate change by planting trees isn’t new. Several cities across the country, including Los Angeles, New York, and Philadelphia, have announced their own tree-planting initiatives in recent years. But the movement gained new momentum last year when a widely shared, controversial study published in Science found there’s space on the planet for an extra 900 million hectares of canopy cover—which would translate into a reduction in atmospheric carbon dioxide by 25 percent. The study went viral. Much of the public’s response was positive. (Case in point: It was our most-shared story last year.) And it seems to have helped set in motion the World Economic Forum’s 1 trillion tree goal, a cause supported by the likes of former Vice President Al Gore and naturalist Jane Goodall, and financially backed by Salesforce CEO Marc Benioff.

At the same time, scientists around the globe criticized the study for trying to offer an unrealistic quick fix to the climate crisis, while others said the author’s estimations were “inconsistent” with global carbon cycling dynamics.

The study’s lead author warns that he never meant the takeaway to be that restoring forests is a “silver bullet” climate solution. As Jean-François Bastin, a researcher at Belgium’s Ghent University, recently told me, “It’s not an excuse to continue business as usual.” Still, he says any step forward by Trump is good. If the president is going in the “right direction,” he quipped, “I will not say no to that. I can’t be picky here.”

Planting trees without cutting emissions is like trying to clean up a major oil spill without stopping the leak first. It makes zero sense.

There’s arguably a fine line between moving in the right direction and providing an opportune diversion. As my colleague Rebecca Leber writes, polling shows climate change is Trump’s “most unpopular position.” “It’s getting harder,” she argues, “for Trump to ignore the loudening chorus of conservative voices calling for climate action.” It’s no coincidence that last week also saw House Republicans introduce the Trillion Trees Act, which mirrors the 1 trillion tree goal set out by the president and is one of a series of GOP-led carbon sequestration bills introduced in the House last week.

No matter their motivations, we shouldn’t expect much action or impact anytime soon. There are tons of unanswered practical complications in planting a trillion trees: Where will the trees be planted? What kind of trees will they be? How will this initiative be funded? It’s all unclear! (And the EPA did not respond to a request for comment from Mother Jones.) Even if the administration manages to get some seeds in the ground, trees can take decades to reach maturity, says Sassan Saatchi, a senior scientist who specializes in carbon cycling at NASA’s Jet Propulsion Laboratory. “It takes a lot of energy and carbon to plant these trees and then, at the same time, it takes a long time for these trees to grow and have that mitigation impact,” he says. “It’s not an immediate return.”

Instead, if Trump really wants to embrace his inner tree hugger, a more practical and immediate step for his administration might be to cut back on deforestation in the short term and focus on managing forests sustainably. As I’ve reported in the past, according to the Intergovernmental Panel on Climate Change, most land-use-related carbon dioxide emissions between 2007 and 2016 originated from deforestation. And as Saatchi points out, Earth’s land already naturally absorbs about 25 percent of our carbon emissions. Keeping those ecosystems healthy is “extremely important,” he says. “Tree planting can help, but the most important thing is to make sure that the ecosystem functions well.”