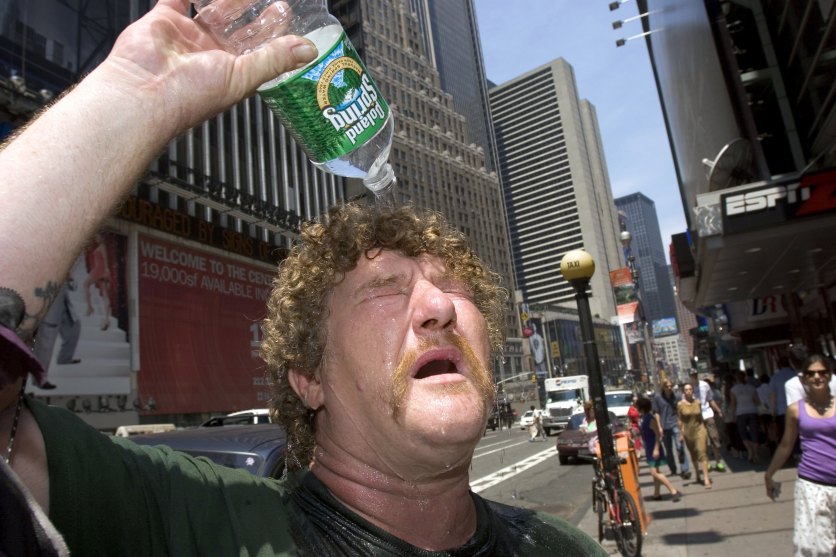 WHICHEVER SIDE OF the subjective city-versus-rural debate you’re on, the objective laws of thermodynamics dictate that cities lose on at least one front: They tend to get insufferably hotter, more so than surrounding rural areas. That’s thanks to the urban heat-island effect, in which buildings and roads readily absorb the sun’s energy and release it well into the night. The greenery of rural areas, by contrast, provides shade and cools the air by releasing water.

Climate change is making the urban heat-island effect all the more dire in cities across the world, and it’s only going to get worse. Like, way worse. An international team of researchers has used a new modeling technique to estimate that by the year 2100, the world’s cities could warm by as much as 4.4 degrees Celsius on average. For perspective, that figure obliterates the Paris agreement’s optimistic goal for a global average temperature rise of 1.5 degrees C from preindustrial levels. In fact, the team’s figure more than doubles the agreement’s hard goal of limiting that global rise to no more than 2 degrees C.

Up until this point, global climate models have tended to snub urban areas, and for good reason, as they make up just 3 percent of the planet’s land surface. Cities are but a blip. Researchers are more interested in the dynamics of things like the ocean, ice, and air currents. “We’re closing this kind of gap,” says Lei Zhao, a climate scientist at the University of Illinois at Urbana-Champaign and lead author on a recent paper published in Nature Climate Change describing the modeling. “We provide urban-specific projections for the future.”

His team’s model suggests that hotter cities could be catastrophic for urban public health, which is already suffering from the effects of increasing heat. Between 2000 and 2016, according to the World Health Organization, the number of people exposed to heat waves jumped by 125 million, and extreme heat claimed more than 166,000 lives between 1998 and 2017. And while at the moment half the world’s population lives in urban areas, that proportion is expected to rise to 70 percent by 2050, according to the authors of this new paper. People in search of economic opportunity are unknowingly rushing into peril.

“When I read these papers, I just don’t know what’s wrong with humanity, to be honest with you. Because this is like the same song being sung by different people,” says climate scientist Camilo Mora of the University of Hawaii at Manoa, who wasn’t involved in the work. “Come on, man! When are we going to get serious about this problem? This is another person ringing the bell. We just for some reason refuse to hear this thing.”

To calculate how much city temperatures might rise, Zhao and his colleagues from a number of institutions, including Princeton University and Lawrence Berkeley National Laboratory, built a statistical model for the climate of urban regions, focusing on changing temperatures and humidities. These two factors are the conspiring menaces of extreme heat: Our bodies respond to high temperatures by perspiring, which is more fancily known as evaporative cooling. But humidity makes this process less efficient, because the more moist the air is, the less readily it accepts evaporating sweat from our bodies. That’s why humid heat feels so much more uncomfortable than dry heat.
Heat and humidity are not only uncomfortable; they can be dangerous. Mora has identified 27 ways heat can kill a person. When your body detects that it’s overheating, it redirects blood from the organs at your core to your skin, thus dissipating more heat into the air around you. (This is why your skin turns red when you’re hot.) In extreme heat, this can spiral out of control, resulting in ischemia, or the critically low flow of blood to the organs. This can damage crucial organs like the brain or heart. In addition, a high body temperature can cause cell death, known as heat cytotoxity. Humidity compounds the risk of overheating and organ failure, since you can’t sweat as efficiently to cool down.
Extreme heat can harm healthy people, and those with heart or respiratory conditions like asthma are particularly vulnerable. Children are also at particular risk because of the thermodynamics of their bodies; their small size means that they both heat up and cool down faster. When he teaches his students, Mora uses the analogy of trying to cook a large potato—even one that is heated for a long time can remain cold in the middle. But if you want to heat it up faster, just slice it in half. “You double the area for exposing the potato to the heat so that it can get to the core of the potato easier. What you have done is change the ratio of volume to area,” he says. “That’s exactly what happens with children. In adults, we can cope with the heat better because not only do we have an insulation barrier, the heat will take a longer time to get to the core.” On the other hand, he continues, for children “the heat that is there is pretty much all the way down to their core.”

Mora likens the simultaneous risks of climate change and the heat-island effect to having to battle two foes at once. “Dealing with climate change is like getting into a fight with Mike Tyson,” he says. “With the heat-island effect that these guys just documented here, that is now like bringing Jackie Chan on top of Mike Tyson. So now you gotta face those two guys—there is just no way for people to cope with this.”

To model how these two forces might affect cities, Zhao and his team turned their statistical model into an “emulator,” which mimics complex climate models, but focuses on urban areas. They could then apply the emulator to results from over two dozen global climate models, assuming either intermediate or high emission levels going forward, to translate coarse climate model outputs to the city level. When they assumed an intermediate level of emissions, they found that, on average, the planet’s urban regions could warm 1.9 degrees C over the next 80 years; when they assumed a high level, the figure became an astonishing 4.4 degrees C.

Overall, it’s bad news no matter where a city-dweller lives, but urban areas will be affected in different ways. For instance, the modeling found that the northern United States, particularly the upper Midwest, will warm more than the southern US. When it comes to relative humidity, inland cities around the world will tend to dry, while coastal cities will stay wetter—which makes good sense, given that they’re next to water.

Humanity can, though, brace its urban areas for the brutal heat that climate change is already delivering—by making them more rural. Greening public spaces both beautifies them and provides people with shade. Each tree’s leaves also act like tiny air conditioners, releasing moisture to cool the environment. And the less the pavement is exposed to the sun, the less the built environment will absorb its energy.

With the arrival of the Biden administration, the US could even revive the New Deal’s Civilian Conservation Corps, putting people back to work greening up cities. That’ll be especially critical in communities of color and low-income neighborhoods, which tend to be less green and thus more likely to suffer from the heat-island effect, a consequence of racist housing policies.

Plus, says Elizabeth Sawin, codirector of Climate Interactive, a nonprofit that focuses on the intersection of climate change and inequity, greening creates jobs. You need people to grow the trees in a nursery, and then others to plant and maintain them, for instance. “Particularly when that can be done in partnership with the communities, there’s a real opportunity to train people in new skills,” she says. “Those would be investments that really would help cities adapt to the climate change we can’t prevent.”