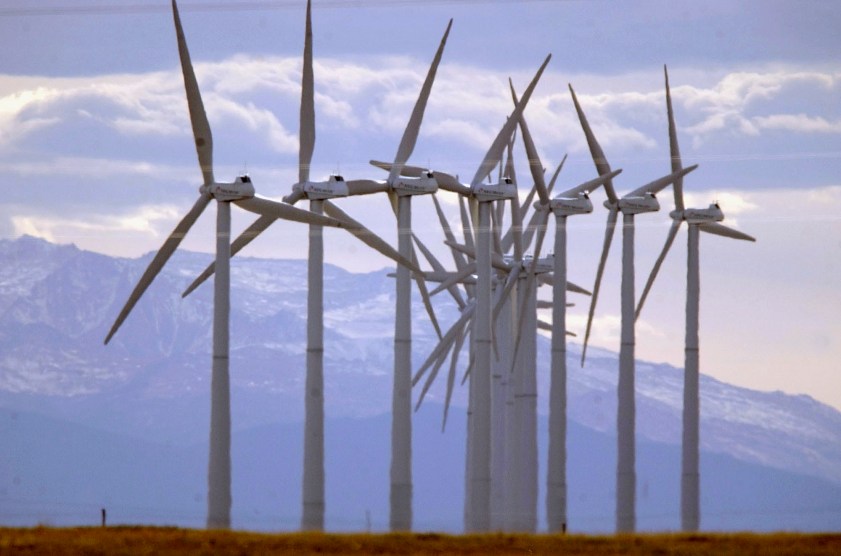 Turbines blow at a wind farm on the border of Colorado and Wyoming.David Zalubowski/AP

When the COVID-19 pandemic hit, Robin Lockman feared the worst for her town of Cheyenne, Wyoming. As the city’s treasurer, she estimated that it might lose up to 25 percent of its budget as tax revenues stalled and the prices of oil, gas and coal tanked, eliminating money the city typically receives from the state as royalties from the extractive energy industry.

So the city did the hard work of laying off 18 employees and cutting funds for travel and training. And then a surprising thing happened: The huge deficit never arrived. In fact, over the summer, the city brought in more tax revenue than the year before.

Between July and September, Cheyenne saw a 20.5 percent increase in tax revenue compared to 2019. In September alone, the increase was a staggering 83 percent, or $1.4 million. “I was in shock when I saw it,” said Lockman. She feared the good news was a mistake, so she called the Wyoming Department of Revenue to confirm the numbers. “The tax reported was legitimate, and was due to the Roundhouse Wind Project,” said Lockman, referring to an energy development west of the city.

Throughout Wyoming, counties typically depend on industries like coal, oil and gas drilling, mining or tourism and recreation to bring in the taxes necessary to pay for education, community programs and infrastructure. Overall economic activity is down—statewide, sales and use taxes shrunk 6 percent over the last year—but revenues from mining, quarrying, and oil and gas extraction are down nearly twice that. Meanwhile, profits from wind energy developments, like the Roundhouse Wind Project, are booming. Now, residents and officials are asking whether wind energy can help the state survive the economic storm of the pandemic—and become a reliable revenue stream for the future as fossil fuel income dries up.

Over the last decade, investors have laid the groundwork for wind farms across Wyoming, which ranks among the nation’s top 10 states for wind capacity, according to the U.S. Department of Energy. The Power Company of Wyoming, a private company run by the Anschutz Corporation, is developing a facility on Carbon County’s 320,000-acre Overland Trail Ranch, just outside Rawlins. Framed by I-80 to the north and Sage Creek Road to the west, the property is one of Wyoming’s classic wide-open spaces: miles of rolling grassland dotted with scrubby sagebrush. On land long used for cattle and sheep ranching, in a county named for rich coal deposits, construction crews have built roads and turbine pads for the Chokecherry and Sierra Madre Wind Energy Project, which will comprise nearly 1,000 wind turbines by 2026. Sixty miles east, Rocky Mountain Power, a subsidiary of the state’s largest utility, has begun erecting 270-feet tall turbines at the Ekola Flats Wind Energy Project.

“Once the Chokecherry and Sierra Madre Wind Energy Project is complete, we estimate 114 permanent jobs will be created.”

The projects will create local jobs as workers operate and maintain the facilities. “Once the Chokecherry and Sierra Madre Wind Energy Project is complete, we estimate 114 permanent jobs will be created,” said Kara Choquette, Power Company of Wyoming’s communications director. The Two Rivers and Lucky Star wind projects, smaller developments near the border between Carbon and Albany counties, are expected to generate another 24 long-term operations and maintenance jobs.

Right now, that new construction is generating much-needed sales taxes on materials. Between April and June, Carbon County’s taxable sales increased by 108 percent. “Everyone else around here’s hair is on fire, but we’re sitting in a pretty good position, thanks to wind energy,” said Dave Throgmorton, director of the Carbon County Higher Education Center, which is funded by the county and provides college-level and vocational training classes.

But that increased tax flow is not guaranteed to continue. Lockman, Cheyenne’s treasurer, thinks the boom her city saw in the third quarter of 2020 might be a one-time influx from a period of heavy construction. “Personally, I feel it’s probably a temporary type of situation, but I’m hoping it will be longer term,” she said.

Residents have also raised concerns that wind energy jobs aren’t going to locals. Many wind projects have been completed by teams that travel to the state for a few weeks at a time, living in camps at the edge of town, Throgmorton said. “Everyone was hoping locals would be involved in wind turbines, but turns out that’s all done by specialty teams from outside,” he said. For example, the permit applications for the Two Rivers and Lucky Star wind projects explicitly mention “man camps” and estimate that roughly 80 percent of workers will be “non-local.” About half of the 100 people working on the Chokecherry and Sierra Madre project between April and November were from Wyoming, said Choquette, the Power Company of Wyoming communications director.

Though legislators have not made any recent changes to wind taxes, recurring proposals scare off companies, said Terry Weickum, a former Carbon County Commission chairman and a newly-elected member of the Rawlins City Council. “No one wants to do business in an unstable environment,” said Weickum. “It’d be like if you bought a car for $100, and then you found out this $100 car needs a $2,000 motor.”

“People who have made their living in oil, gas and coal—they feel like if you like wind, you’re cheating on your wife.”

Some see it as a sign that the state is giving up on its sunsetting oil, gas and mining industries. Throgmorton said many of his students imagine following in their parents’ footsteps and working at the Sinclair Oil Refinery. “But that’s more fantasy than real now,” he said. Still, many Wyomingites hope that renewable energies like wind will help sustain the state’s energy economy in the long-term. “Honestly, I hated (wind energy) when it first came along, but I realized I didn’t know anything about it,” said Weickum. “People who have made their living in oil, gas and coal—they feel like if you like wind, you’re cheating on your wife, you’re cheating on oil, gas and coal. But we need every piece of it.”

Even if the wind industry doesn’t continue generating hefty tax revenues, its contributions could help keep counties in the black. Companies pay sales tax on equipment purchased for maintenance, like replacement turbine blades, property taxes on the assessed value of projects, and taxes on the energy generated. According to Connie Wilbert, director of the Sierra Club’s Wyoming chapter, those proceeds can be many millions of dollars a year. “For these small towns in Wyoming, budgets aren’t that big, so if you had a steady, reliable $5 million a year, that’s a big deal.”

People in communities benefitting from the financial windfall of new projects are grateful for those extra dollars this year. Throgmorton calls the wind industry “the goose that’s laying the golden egg,” and said he’s relieved to be able to focus on his campus’s development. And Lockman, the Cheyenne treasurer, said that even if the big tax increases from this year don’t continue, it’s been a boon during the pandemic months that will allow the city some leeway in 2021. “Thank goodness for wind energy,” she said, “because if not for it, we’d be in a lot different shape.”