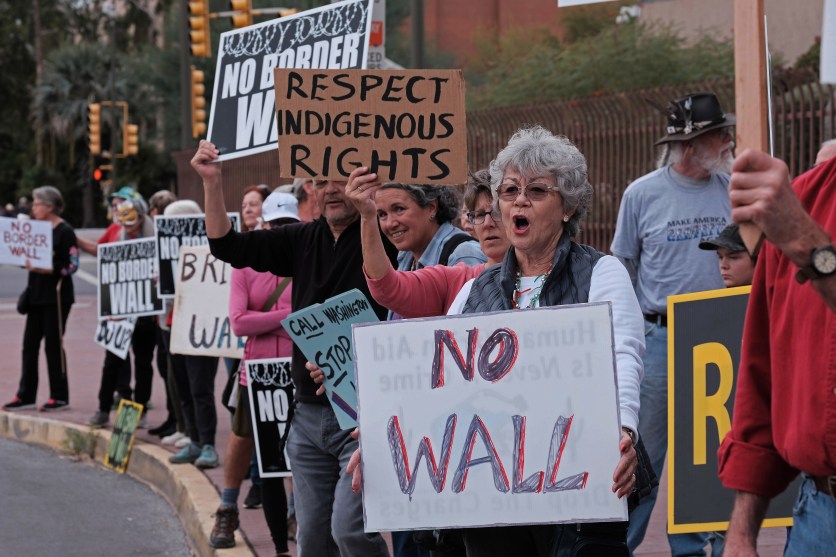 Arizona leaders and activists hold a rally in Tucson in 2019 to protest construction of the border wall, which they said would block animal migration, destroy Native American sites, and harm endangered species. Christopher Brown/ZUMA

This story is the second of three installments in a series by High Country News and Arizona Public Media and is reproduced here as part of the Climate Desk collaboration. The first installment is reprinted here.

By the time President Donald Trump left office, contractors had erected a wall along just over 450 miles of the international boundary with Mexico. Nearly 230 miles of it was in Arizona, according to figures provided by U.S. Customs and Border Protection. The new wall stops short of some 60 miles of border located in the Tohono O’odham Nation, but it hasn’t spared the O’odham tribes’ ancestral land, which spreads across central and southern Arizona and into northern Mexico.

The Gadsden Purchase of 1853 sliced the O’odham homeland in half more than a century ago, and over the last year, the Trump administration’s steel bollard wall has carved another deep scar into it. Verlon Jose, the former vice chairman of the Tohono O’odham Nation, now serves as one of the traditional O’odham leaders in Mexico. Jose told me, “When people ask me, ‘What does this feel like to you?’ It feels like if someone got a knife and dragged it across my heart.”

In January, President Joe Biden’s executive order temporarily halted all construction and reversed his predecessor’s 2019 emergency declaration, which Trump had used to obtain military funds for the wall. Still, Jose said, a great deal has already been damaged or destroyed. “Now tell me if that is repairable and (can) go back to its original state, as God the creator intended for it to be,” he said. “I think the answer is, ‘No.’ It’s going to be a scar that’s going to be there forever.” Now, communities that have spent years resisting border wall construction through court filings, online campaigns and on-the-ground protests are waiting to see how the fate of the Borderlands will change under the Biden administration.

In some areas, the new wall simply replaced the old, waist-high vehicle barriers. But in others, contractors tore into rugged desert wilderness to build where nothing existed before. From her front window, Ammi Robles, a Mexican artist who lives in Agua Prieta, can see a blank cement wall, an older border barrier, while new construction has been appearing everywhere.

Robles used to make weekly trips across the border to Douglas, something that hasn’t been possible in the last year because of COVID-19 border closures. But even before then, she said, the new walls made it harder to feel connected.

“It feels like they’re pushing us away. I don’t want to say that I feel resentment, but I kind of feel that way,” she said. “Like they’re closing themselves, like, ‘We don’t really need Agua Prieta.'”

The wall is not just eroding community ties, advocates argue; it’s impacting shared natural resources. Alejandro Olivera, senior Mexico representative for the Center for Biological Diversity, said wall contractors are pumping out precious groundwater that is supposed to be used by both countries. “They are shared within the two nations, so they are pumping the water that should be considered and discussed with the Mexican government before they do these kinds of activities,” he said.

Olivera was one of a few dozen environmentalists and tribal representatives from both sides of the border who co-signed a letter asking Mexican officials to work with Biden to end wall construction.

Even U.S. federal assessments have doubted the project’s efficacy. An Office of Inspector General report called the wall “outdated,” saying the Trump administration failed to use “sound methodology” and did not properly consider the project’s multibillion-dollar cost to taxpayers.

Still, the Trump administration waived dozens of environmental and cultural protection laws to push the project through. In January, southern Arizona Congressman Raúl Grijalva told reporters he wanted to see the repeal of the Real ID Act, the 2005 law that made those waivers possible.

“It has been the driver, particularly on public land and border communities, in the suspension of those civil laws, protection, public processes and civil rights,” he said. “That’s a legislative initiative we hope to begin almost immediately.”

Grijalva said he plans to push for restoration efforts, including potentially removing parts of the wall in sensitive areas. But with so much already built, some worry it’s too late, especially in places like Quitobaquito Springs — an ancient water source and manmade pond located on ancestral O’odham land along the border in Organ Pipe National Monument in Arizona.

Last summer, the spring flow dropped to a record low; the pond began to dry up, and cracked mud flats appeared where water once shimmered. At the same time, stacks of steel wall panels appeared near the site. In recent years, drought, agricultural pumping and cracks in the pond’s lining had depleted Quitobaquito’s water. But environmental and tribal advocates say that wall contractors are exacerbating the problem by pumping groundwater to mix cement. Customs and Border Protection spokesman Rob Daniels acknowledged that the project has extracted some 45 million gallons from nearby wells.

Long before it was part of Organ Pipe, Quitobaquito was a traditional Hia C-ed O’odham homestead. Families lived there until the 1950s, when the land was bought by the National Park Service. Nellie Jo David said that watching the new wall go up reminded her of what happened to her Hia C-ed O’odham relatives decades ago. “These lands which are so-called national monuments are actually unceded territories in which Indigenous people have been pushed off and intentionally erased,” she said.

David and Amber Lee Ortega another Hia C-ed O’odham woman, were praying and singing there one morning last September when construction crews began work a few paces away. The two women were arrested by National Park Service officers for climbing into machinery and forcing work to a halt.

Their arrests marked an escalation in a series of Indigenous-led demonstrations to save Quitobaquito. More protesters were teargassed, shot with rubber bullets and arrested, even as the wall continued to inch closer to the site. In December, a Customs and Border Protection spokesperson confirmed that the wall in Organ Pipe had been completed, though crews were still installing lighting and building roads by the time Biden ordered the construction to a halt.

“The damage has already been done,” David said. “I understand there’s a big push to stop, which is good,” she went on, “but what we really need is a removal and a restoration.”

What we really need is a removal and a restoration.”

Still, there’s no telling when, or if, that removal will occur. In January, the Arizona Democratic Party passed a resolution calling for a series of reforms in the Borderlands, including removing certain sections of the wall and compensating Indigenous groups whose sites have been destroyed. Biden, however, has never publicly supported tearing sections down.