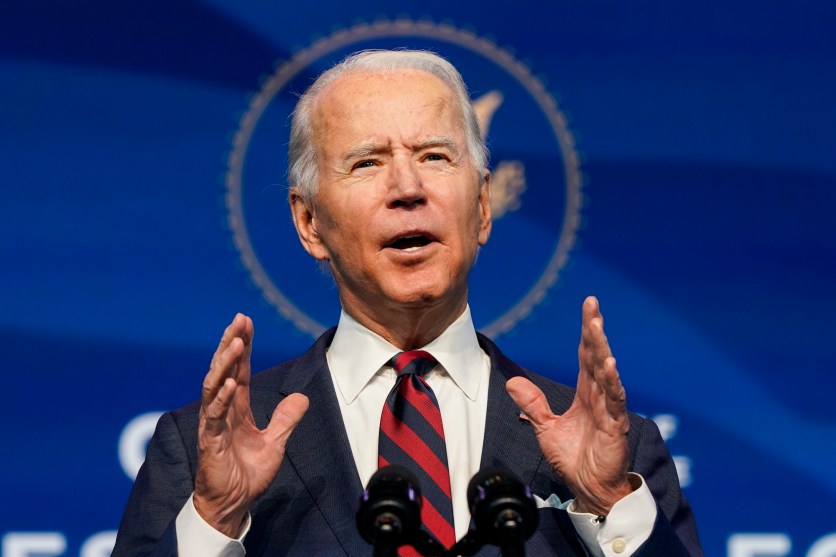 Then President-Elect Biden announces members of his climate and energy appointments at the Queen theater in Wilmington, DE. December 19, 2020. Joshua Roberts/Getty

Republican efforts to stall President Joe Biden’s climate agenda are slowly beginning to take shape. In March, a coalition of 12 Republican state attorneys general filed a lawsuit challenging Biden’s executive order creating a working group to establish a metric for the “social cost of carbon.” Led by Missouri’s attorney general, Eric Schmitt, the lawsuit charges that the order is an “enormous expansion of federal regulatory power” and that such cost calculations are “inherently speculative, policy-laden, and indeterminate” and should instead be undertaken by Congress.

In a similar vein, 21 Republican-controlled states, led by Texas and Montana, have sued the Biden administration over its decision to revoke a permit for the Keystone XL pipeline, calling it an unconstitutional overuse of executive power that would diminish the states’ economies and tax revenue. Both lawsuits are pending in federal courts. Separately, in response to Biden’s alleged “hostility to the energy industry,” Texas Governor Greg Abbott issued an executive order in January directing state agencies to “use all lawful powers” to challenge federal policies that disadvantage oil and gas operators. (Texas state agencies with the ability to loosen environmental regulations on the oil and gas industry largely do not appear to have changed policies in response to the order.)

Ultimately, many of these actions may amount to little more than grandstanding, and it’s difficult to discern whether or not a broad, deliberate strategy is at work. But behind the scenes, call records obtained by Grist show that the American Legislative Exchange Council, or ALEC, has formed a new working group to build upon these efforts.

“They want to keep making profit and imperil the climate stability and the health of people all across the United States. That’s how they make money.”

On a one-hour call with ALEC members in late February, former Utah state representative Ken Ivory claimed that each directive in the president’s January executive order on climate action unduly entrenched federal power and stripped authority from the states. He surfaced fears that Biden will declare a national “climate emergency” that “unlocks more than 130 unilateral executive actions.” (It’s unclear how Ivory, who did not respond to Grist’s request for comment, arrived at that figure.) Ivory also faulted the Democratic administration for promoting climate-focused policies within federal agencies through executive orders, rather than routing all proposals through Congress.

“We’re seeing something that they’re identifying as a new age in climate federalism,” Ivory said.

The call was the first of two that have taken place so far as part of ALEC’s new Functional Federalism Working Group, which exists separately from a longstanding ALEC task force on federalism and international relations. The new group hasn’t been publicized on the ALEC website beyond two brief mentions in blog posts penned by Ivory. Its name suggests that the group is meant to redress what Ivory described as an imbalance of power between Biden’s presidency and state governments, a majority of which are dominated by conservatives.

“What’s the reasoning or the exact strategy for them in creating this secretive working group, we still don’t know,” said David Armiak, a research director with the Center for Media and Democracy, a nonprofit government watchdog group that tracks ALEC’s initiatives and provided Grist with a verbatim record of the two recent calls. “Fossil fuel and pharmaceutical companies do still play leadership roles and very active roles in sponsor meetings, and they’re worried about some of these executive actions.”

A spokesperson  for ALEC did not respond to Grist’s requests for comment.

“We’re seeing something that they’re identifying as a new age in climate federalism.”

ALEC is a membership organization for state lawmakers and industry representatives that is best known for drafting model bills that are then picked up by state legislatures. Its bills have been linked to a number of state laws discouraging clean energy and criminalizing protests against pipeline projects. ALEC’s efforts to block climate progress, combined with its alliance with right-wing groups that explicitly promote climate change denial, has led major corporations such as ExxonMobil, Royal Dutch Shell, Microsoft, and Google to cut ties with the group.

While it’s still too early to tell exactly what shape opposition to the Biden administration’s climate proposals will take, the ALEC calls provide a few indications. On the calls, Ivory floated three potential ways for state lawmakers to present a united front  against the Biden agenda: nullification, or passing state legislation to invalidate federal actions that states believe are unconstitutional; the initiation of a constitutional convention that would pass amendments giving states more power; and the passage of non-binding resolutions reaffirming the U.S. Constitution’s Tenth Amendment, which declares that powers not explicitly granted to the federal government belong to the states, in state legislatures.

“The states have to be able to speak with one voice,” Ivory said. “As John Adams said, ‘The clocks all have to strike at one.’”

Political scientists who spoke to Grist doubted the likelihood of a constitutional convention or nullification actions, but they cautioned against underestimating the effects of passing resolutions at the state level and discussing ways to wrest power from the federal government.

The moves are symbolic and help unify disparate camps within the conservative movement.

“They’re providing the intellectual scaffolding for this elite movement,” said Jacob Grumbach, a University of Washington political science professor who has studied ALEC closely. The moves are symbolic and help unify disparate camps within the conservative movement—from anti-abortion groups to pro-gun groups and fossil fuel interests—by highlighting the shared benefits of more power at the state level, he said.

Grumbach noted that, during the Trump years, ALEC was less involved in the issues animating national politics than it had been during previous administrations, and it further cemented its position as a bill mill for state legislatures. ALEC’s federalism initiatives are already cropping up in state legislatures. Resolutions reaffirming the Tenth Amendment and ostensibly nullifying Biden’s executive orders have been introduced in at least four states—Idaho, Texas, South Carolina, and Montana—this year, but they have not yet passed. The bills are based on a theory that states have the right to veto federal policies or declare them “null and void” within their borders if they believe they are unconstitutional. The theory has its roots in the antebellum efforts of some states to preserve slavery and has not been upheld in federal court.

Leah Stokes, a political science professor at the University of California, Santa Barbara, said that it was predictable that ALEC’s new federalism working group would be laser-focused on climate policy. (Editor’s note: Stokes was selected as a Grist 50 Fixer in 2020.) With the exodus of technology companies from ALEC, many of the organization’s remaining members are oil and gas interests.

“It’s not surprising to see the fossil fuel industry try to push back and weaken progress because they don’t want us to get off fossil fuels,” she said. “They want to keep making profit and imperil the climate stability and the health of people all across the United States. That’s how they make money.”