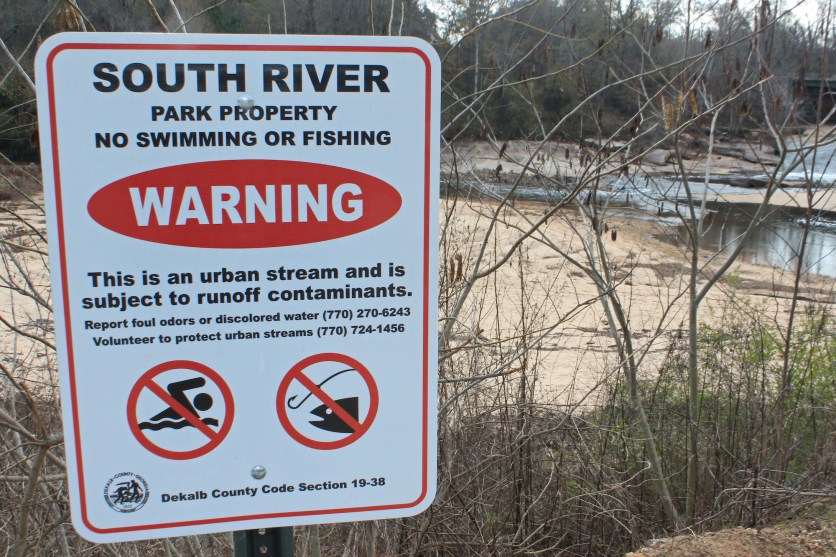 A warning sign on the South River near DeKalb, Georgia. Alan Cressler/American Rivers

The Boundary Waters—an area including more than 1000 pristine lakes and 1200 miles of rivers and streams in northern Minnesota— are being threatened. Twin Metals, a subsidiary of the Chilean mining company Antofagasta, has proposed opening a copper mine there that environmental advocates say will do irrevocable damage to the overall health of waterways in the area. The mine threatens to jeopardize wildlife and will also compromise the robust tourist industry that relies on the Boundary Waters wilderness for survival.

Or consider the proposed hard rock mine along the Pecos River in New Mexico. It’s likely to harm more than 5,000 acres of wildlife habitat while polluting the 926-mile long river that extends from New Mexico to the Rio Grande in Texas. In Georgia, decades-long pollution from sewage and stormwater runoff threatens the South River, which flows through predominantly black, and low to moderate income communities in Atlanta and DeKalb county. Years of consistent pollution there have raised concerns about the health of the wilderness, the safety of fish consumed from the river, and whether or not residents should even swim in it.  These are only three of ten rivers that are now considered to be the most endangered of the many in the US that are in environmental peril.

On Tuesday, American Rivers, a river conservation group, unveiled its 36th list of America’s Most Endangered Rivers. Past reports have been catalysts for action. In some instances leading to protection of natural resources, as with the Gila River in New Mexico, or an effective response to pervasive environmental injustice, as with Washington’s White River in 2014. Meant as a call to action, this year’s list was winnowed down from more than 30 rivers nominated by national and regional American Rivers staff and partners on the basis of three criteria: How close they are to their “tipping point,” or to suffering damage that may be irreparable; what’s at stake in communities, in natural and cultural resources, and with wildlife that will be casualties of man-made decisions; and can something be done within the next year to intervene and avoid even greater despoliation.

“There are many, many, many other rivers throughout this country that are very endangered and need support,” Tom Kiernan, President and CEO of American Rivers tells Mother Jones.

Most of the ten rivers on the list face risks that were either created or exacerbated by the Trump Administration, which weakened environmental regulations, hobbled the EPA, made it easier for oil companies to drill in National Parks, and generally pursued policies that encouraged natural resource extraction at the expense of environmental considerations. For example, the Twin Metals copper mine poised to operate in Boundary Waters was greenlit in 2019. The contested mine has prompted a state legal review of mining regulations, and environmental advocates have squared off against the mining industry in protest of anticipated environmental damage. A coalition of environmental groups filed a lawsuit against regulators in 2020 alleging that the environmental review of the proposed mines didn’t comply with legal requirements. The lawsuit was paused in 2021 pending a review of the decision to grant the mining permits by the Biden Administration.

“Copper mining can lead to acid mine drainage,” Amanda Kimsey, campaign manager for the Wilderness Society, says. “There’s plenty of examples of copper mines that have failed and have spilled into surrounding areas that have completely wiped out water based ecosystems.”

The Pecos River in New Mexico also faces the looming possibility of resource extraction, after the mining company Comexico LLC secured 20 mining claims in Tererro, New Mexico, some located within the borders of the Sante Fe National Forest. The Pecos River is a hot spot of biodiversity providing a vital habitat for the imperiled native Rio Grande cutthroat trout. Its watersheds are the habitat for the endangered Mexican spotted owl, among other birds.

“There’s myriad impacts that could happen [to] plant species, aquatic plant species that are essential to fish habitat, not being able to survive,” Kimsey says. “Absolutely fish species would be impacted. And all wildlife is dependent on clean water. So it would have a cascading ripple effect, and that has been known to last in perpetuity,”

In Georgia, decades-long sewage pollution has put the health of the South River at risk. In 2020 DeKalb county was sued by the EPA and the Georgia Environmental Protection Division in 2020 for allowing raw sewage leaks to spill into the South River, threatening environmental health and public safety. DeKalb county paid a $1 million fine to regulators that in effect gave the county a window of seven more years to fix the problem (DeKalb was fined $245,000 by regulators in 2017 for allowing the spillage and underreporting the number of spills). But the county again failed to address the problem and didn’t meet a 2020 deadline to stop the ongoing sewage spew into the South River.

Meanwhile, environmental advocates criticize the local EPA for failing to hold DeKalb county accountable in a meaningful way. American Rivers hopes that stepped up enforcement of regulations and public accountability will prompt DeKalb to take action.

The threat these natural resources face vividly illustrates the recurring failure of agencies to enforce standards such as the Clean Water Act, and instances where local governments failed, for one reason or another, to effectively prioritize environmental health. The EPA weathered deep budget cuts and drastic changes to environmental regulations under Trump, curtailing its ability to enforce existing regulations.

“The EPA is facing a decision that could profoundly help these communities and reverse environmental justice,” Kiernan says. “On that river and on so many other rivers throughout the country.”

The rivers appear on the list in part because they still have a shot at being saved—provided that some substantive action is taken that can circumvent the threat of environmental impacts. In each instance, the outcome of the river hinges on a looming decision by regulators, companies, and federal, state and local officials in the form of approving or halting projects, strengthening and enforcing regulations, and in the case of the Pecos River, voting on proposed legislation.

“The fundamental message of our most endangered rivers report is that we can take action”  Kiernan says. “We can restore the rivers, but we need action to be taken by individual citizens, by the White House, by the federal government, by state governments.”